Agricultural productivity in the United States has grown substantially in the past 100 years. Farmers produce four times as much output from each unit of land, and 17 times as much output from each unit of labor, as they did a century ago. Of the major crops, average corn yield increased eightfold and average soybean yield increased fivefold over this period. However, the rate of growth has slowed recently, which raises questions about how the world will meet the growing demand for agricultural products caused by increases in global population and wealth. 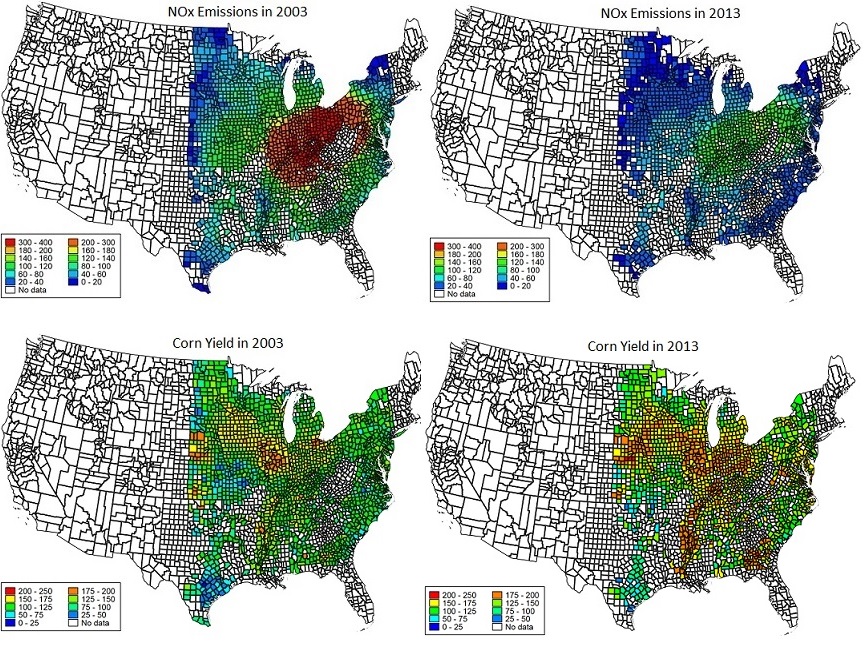 In this article, we quantify the crop yield increases attributed to the recent dramatic reductions in the emissions of nitrogen oxides (NOx) from electric power plants in the U.S. Large amounts of NOx  emissions from coal-fired power plants react with volatile organic compounds in the presence of sunlight to produce ozone. High ground-level ozone in the summer slows photosynthesis and thereby reduces crop production per acre (yield).

In the past decade, the amount of coal used for electricity generation in the U.S. has decreased by more than a third. It has been replaced by technologies that emit less pollution—mostly natural gas, but also wind and other renewables. In addition, emissions from the remaining coal-fired power plants declined substantially over the same period due to adoption of abatement technology.

We use a panel-data econometric approach to quantify the effects of NOx emissions on crop yields. In particular, we estimate regression models to answer the following question: if power plants within a specified radius of an average county centroid reduce total NOx emissions during the growing season, how much do we expect the crop yield to increase in that county, all else equal?

These yield improvements translate into an increase in total annual surplus of $1.60 billion, $1.07 billion of which are attributed to corn. Low elasticities imply a substantial decrease in price due to the rightward shift of the crop supply curves, so this productivity increase makes consumers better off and farmers worse off. We estimate an increase in consumer surplus by $3.77 billion and a decrease in producer surplus by $2.17 billion. Additionally, there is a decrease in farmers’ revenue equal to $2.62 billion.