The world is preparing for the 2022 wheat harvest. Major producers including the USA, Russia, Ukraine, and the European Union will harvest most of their crop in the next three months. Canada will harvest at the end of summer, and Argentina and Australia will harvest six months from now. India and Pakistan just completed their harvest.

Given high prices and the strain created by Russia's invasion of Ukraine, the world is ready for its supplies to be replenished. USDA projected on May 12 that 2022 production would be 775 million metric tonnes, down slightly from 779 MMT in 2021. This projection includes a 50% drop in Ukraine's production and a slight increase in Russian production.

Last week, the USDA Foreign Agricultural Service reported that heat stress reduced India's production by about 11 MMT, so I expect June's projection of world production to be around 764 MMT. This is good news given the many reports of bad weather in wheat production regions. 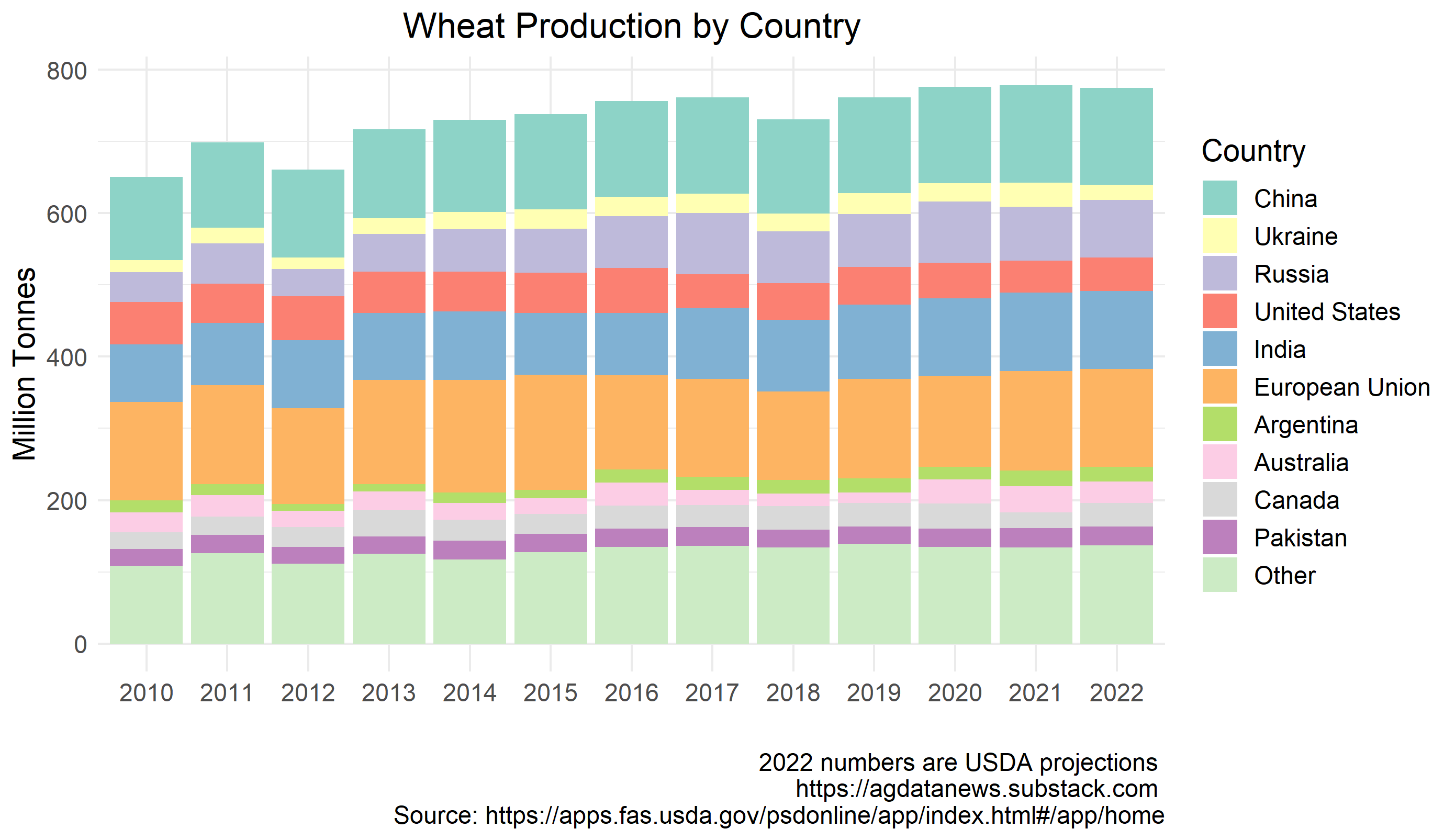 We are entering the new crop year with relatively high carryover inventories equal to 36% of last year's consumption. By the end of this crop year, USDA projects inventories to decline to 34% of consumption.

However, more than half of those inventories are in China, which has been building its grain stockpiles for the past few years. These stockpiles are likely not accessible to world markets (assuming they are estimated accurately). Outside of China, inventories are below average, but not as low as 1996, 1997, 2004, 2007, or 2008. 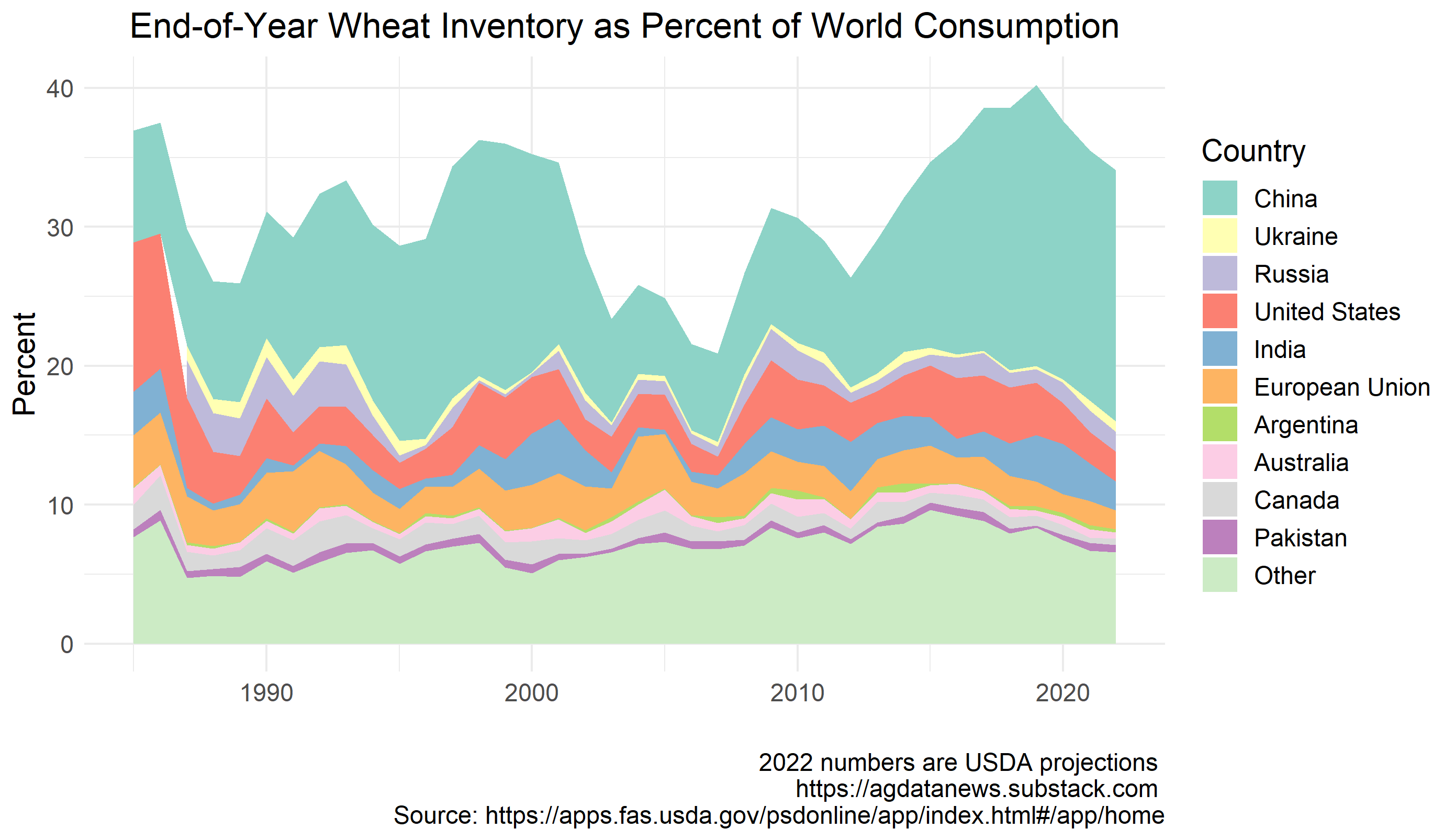 As I noted a couple of months ago, prices reveal scarcity of a commodity.  Adjusted for inflation, wheat prices are currently higher than in 1996, but lower than the the 2008 peak.

It is important to adjust for inflation to avoid  undue focus on prices reaching record highs. Inflation causes all pries to increase over time, so record highs are likely to occur regularly. 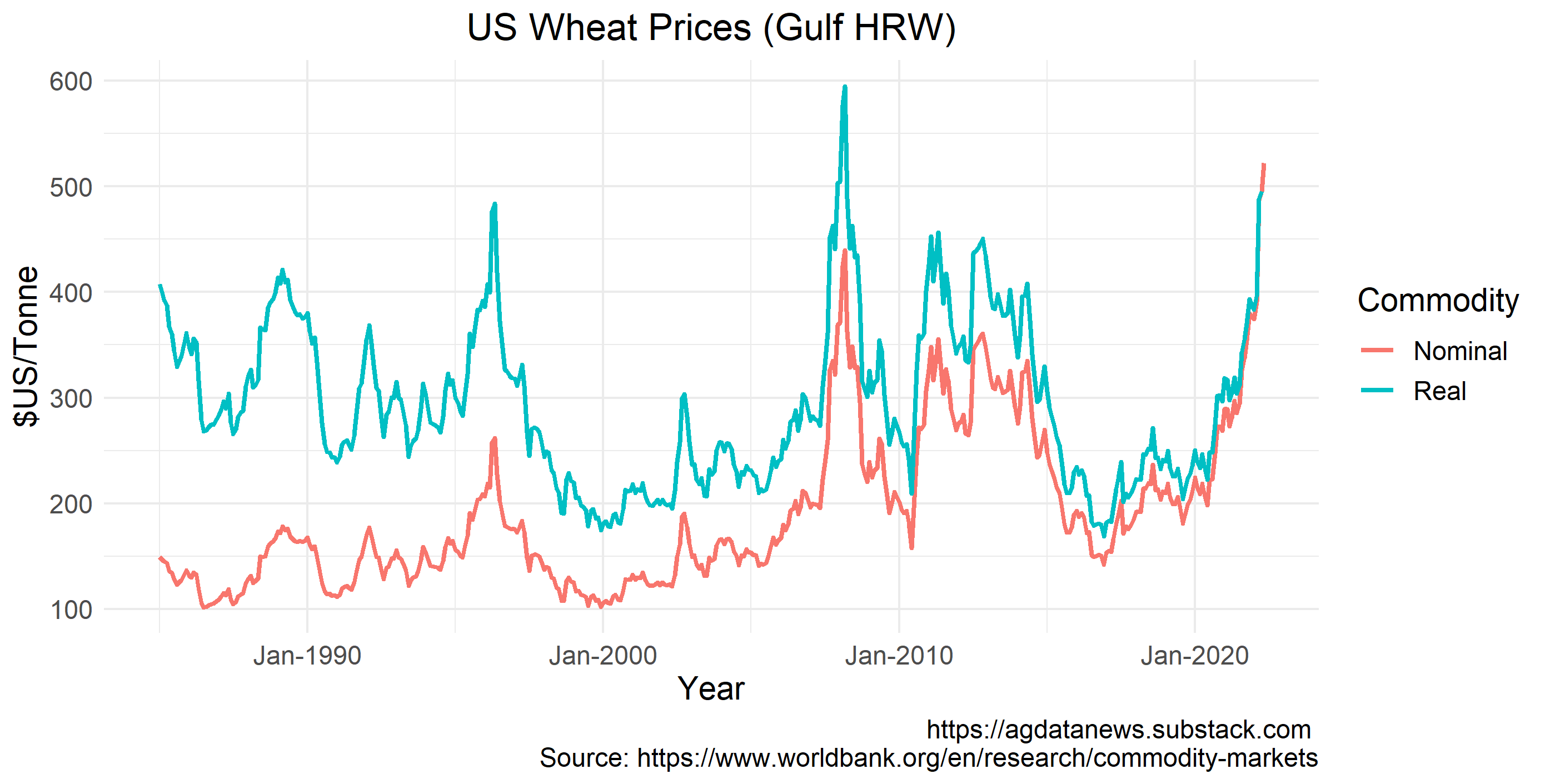 If my claim is correct that prices reflect scarcity then high prices should coincide with low inventories. This is not true if we use global inventories because current inventories are artificially high due to China's stockpile. 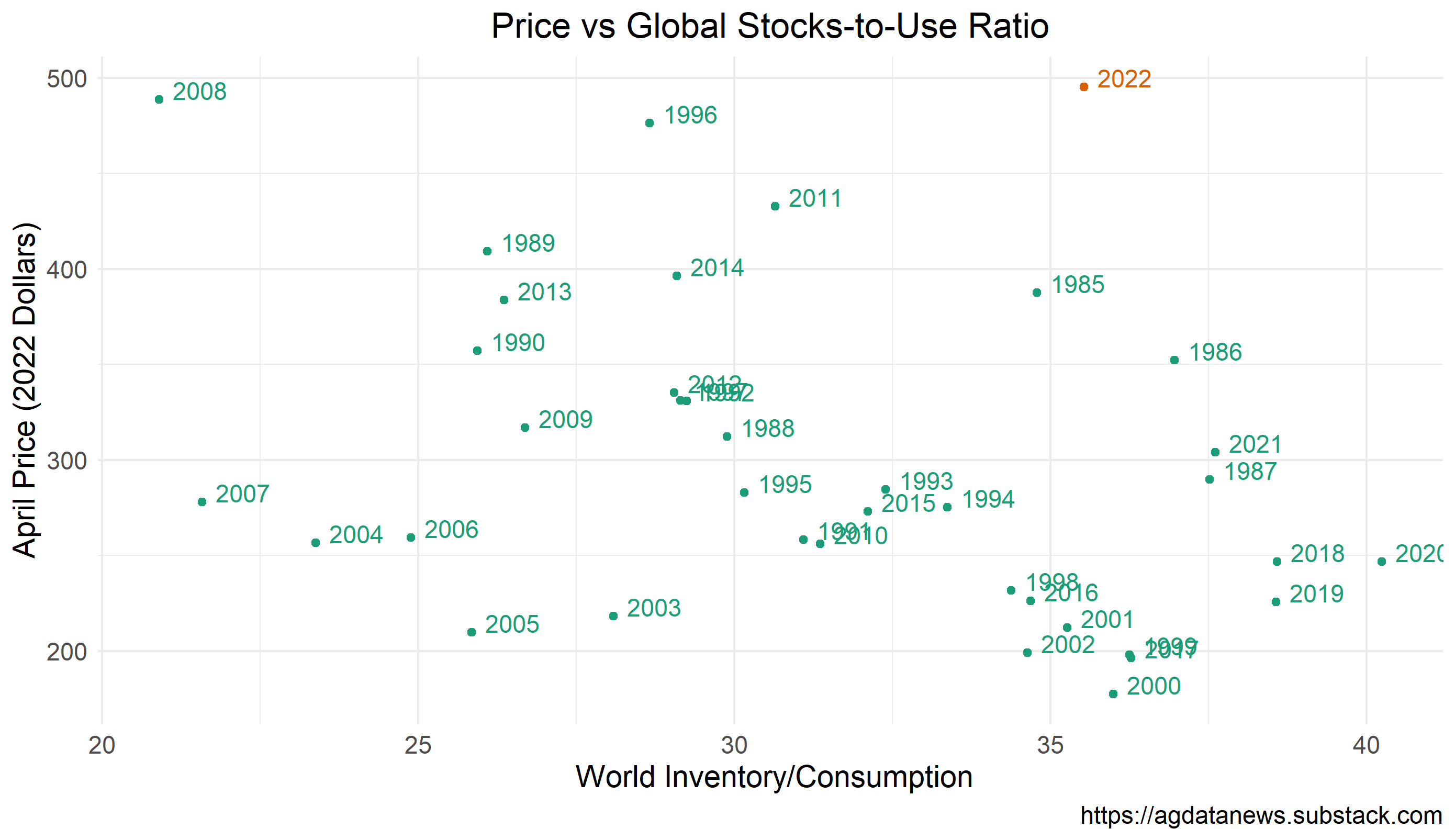 Excluding China, we see that 1996, 2008, and 2022 stand out as years with low inventories and high prices.  Inventories were artificially high in the mid 1980s, especially in the US where the government owned a lot of grain. Overall, high inventories coincide with low prices, although the relationship is not tight. 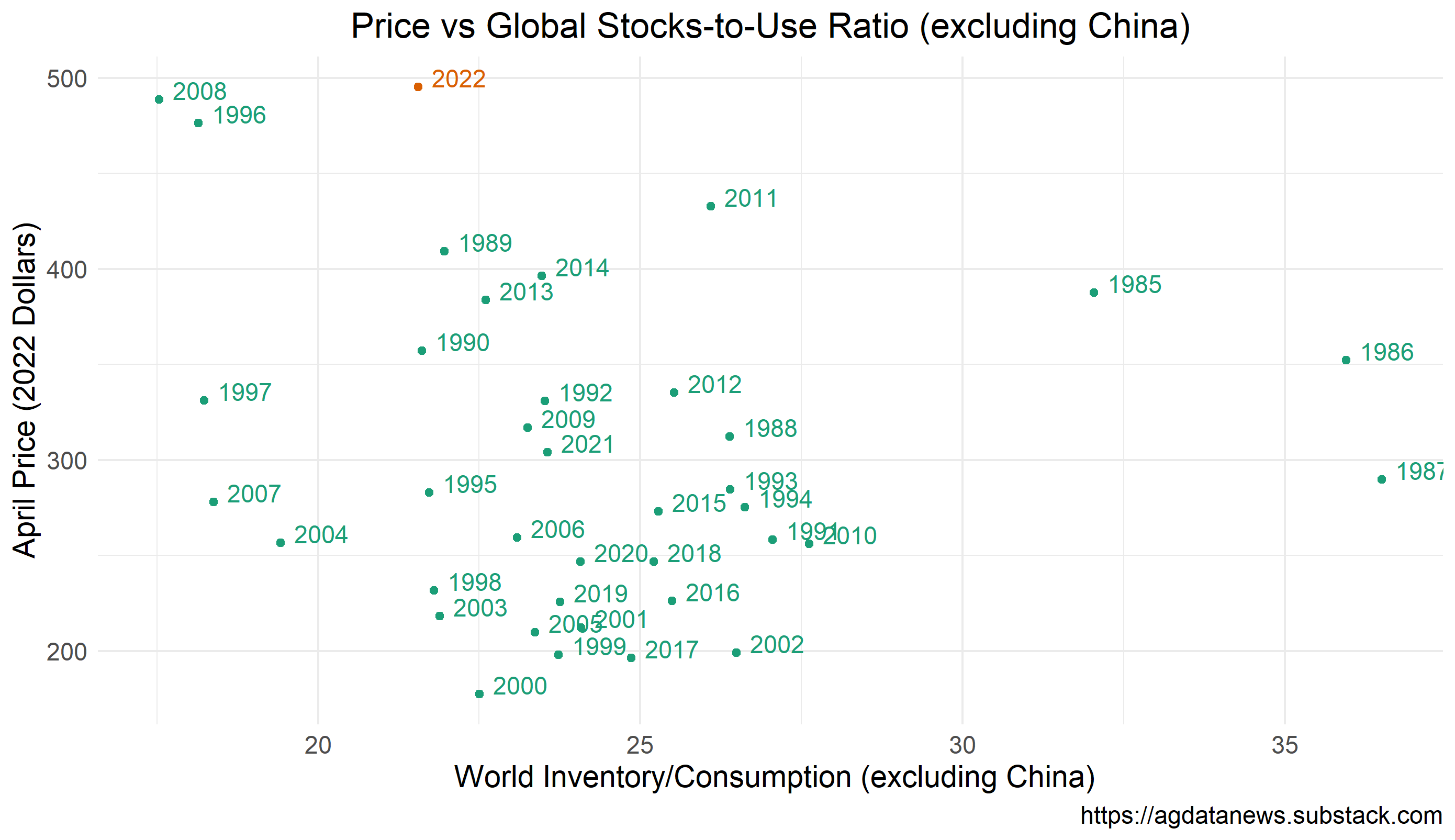 Wheat consumption exceeds production in some years, and in other years production exceeds consumption. However, even in bad years, the world starts out with more than enough inventory to cover the shortfall. In 2022, USDA projects global consumption to exceed production by 9 MMT, but we enter the year with 138 MMT of inventory stored outside China and another 142 MMT stored in China.

A key to avoiding a food crisis will be to find ways for this wheat to be distributed around the world to those who need it. This means not banning (or constraining) exports as India appears to be doing, assisting low-income countries in buying wheat, overcoming supply chain constraints, and getting exports out of Ukraine and Russia.

I made the figures in this article using this R code. You can download these data or view customized figures in our US Major Crops: World Trends data app. All you need is a browser.