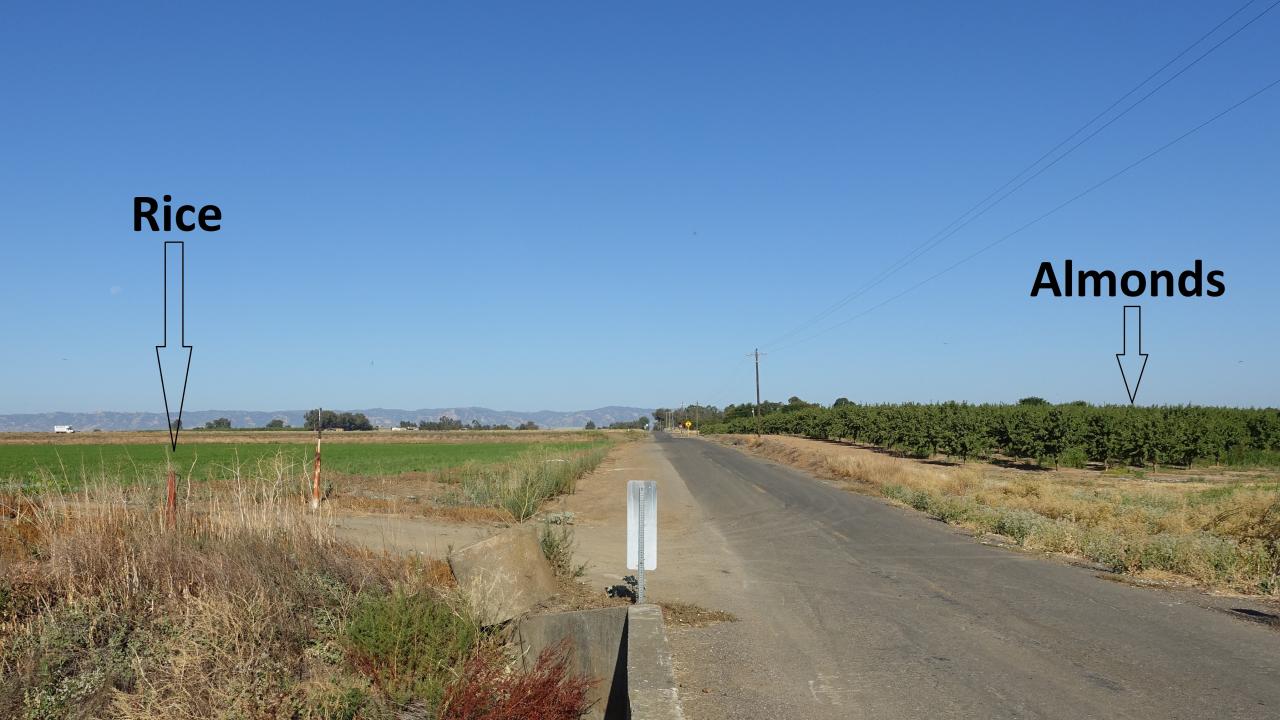 California is special. Any loyalist from any of the other 49 states will tell you that.

California agriculture is special in its crop diversity. This fact struck me on a recent bike ride near Davis. I looked around and could see seven different crops, not counting the wheat and alfalfa fields that I had passed 5 minutes earlier. That doesn't happen in other states. Click on this panorama to see the 360° view.

I created this panorama using the excellent free tool at www.dermandar.com.

The top five California crops make up just over 50% of acreage.  In every other state, the top five make up at least 75%. In Iowa and Illinois, the top two crops (corn and soybeans) make up over 90% of acres. In Nevada and West Virginia, the top crop (hay) makes up more than 90% of acres. 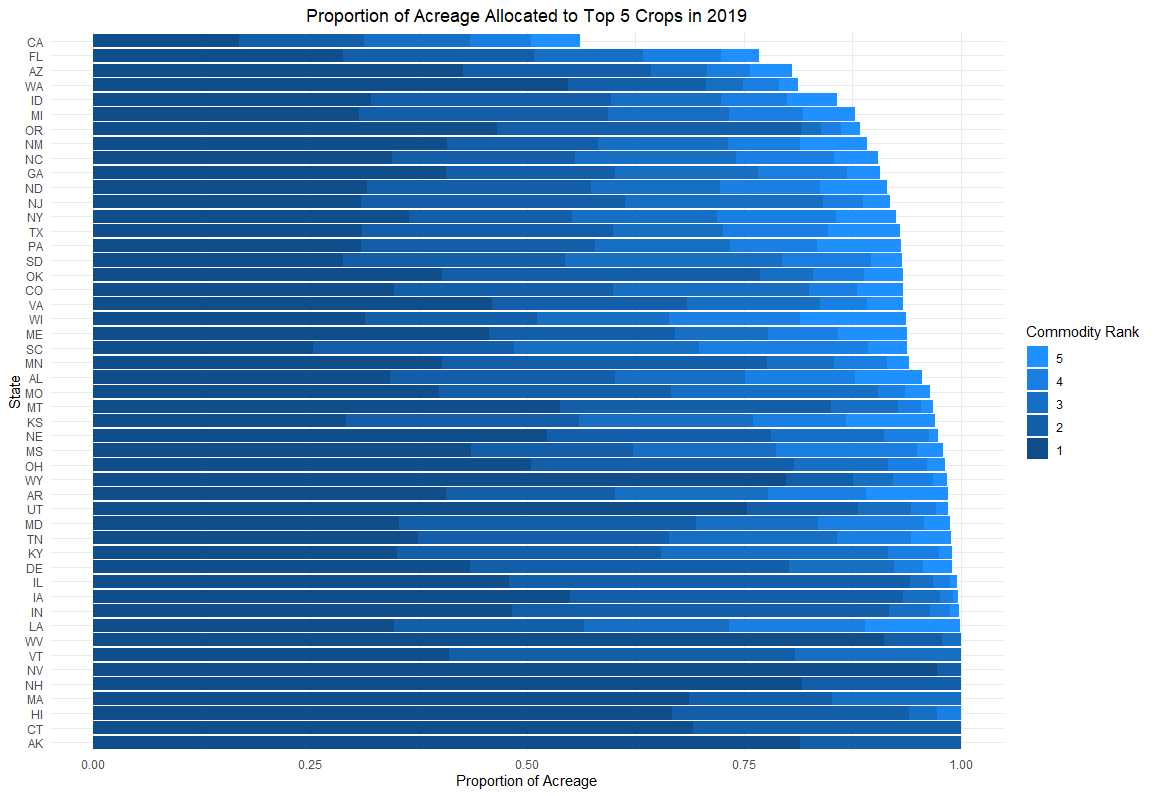 For a different perspective on the same data, the next graph shows the proportion of a state's crop acres that were planted to the top crops in 2019. For clarity, I included only the top 15 states by harvested acreage.

In 2019, USDA reported harvested or bearing acreage for 62 different crops. The chart below shows these crops for California and for four other states (IL, KS, ND, TX). No California crop makes up more than 20% of acreage and numerous crops each occupy a few percent of acres. In contrast, major crops like corn, soybeans, wheat, hay and cotton dominate acreage in the other states. Moreover, California devotes very few acres to the major national crops. 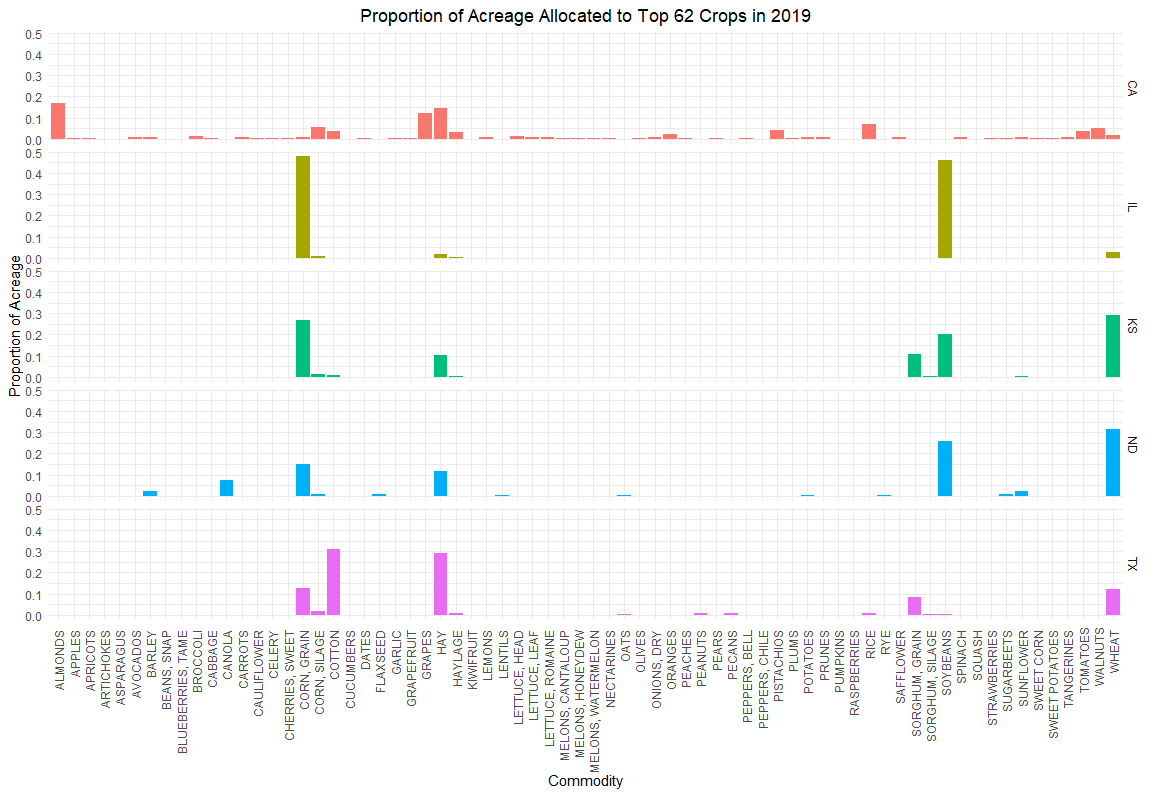 Is this an efficient way to organize American agriculture? If you could allocate crops to farmland around the nation would you assign most of the country to grow the major crops and California to grow the specialty crops?

A long growing season, predictable weather, fertile soils, available labor (historically), and plentiful water (for now) means that almost anything grows well in California's Central Valley. California producers could likely obtain higher yields than other states for any crop if they devoted prime land to it. But, the gap between California and the rest of the country is the most relevant metric for maximizing economic efficiency, and the gap is really large for specialty crops.

In short, California has a comparative advantage in specialty crops, and so it makes sense to grow them here. These facts may change as the agricultural labor supply shrinks and water becomes scarcer.

Regarding the seven crops I saw on my bike ride, an individual farmer may benefit from planting different crops next to each other because it diversifies economic risk and makes it harder for pests to get established.

Our California and US apps currently focus on major crops, so they do not contain all the data in this article. However, I created the figures in this article using the same R code that underlies the apps. The code grabs data directly from NASS using the Quick Stats API (link to code below). To make it work, you need to obtain your own API key.