Something in the Water

This article was written by UC Davis ARE PhD student Jeffrey Hadachek.  It is the sixth in a series of excellent articles written by students in my ARE 231 class this fall.

Agricultural fertilizers generate highly productive crops, but they cause environmental damage by leaching nitrates into water systems. The EPA has called nutrient pollution "one of America’s most widespread, costly and challenging environmental problems", but currently no widespread policy or regulation curbs the over-application of nitrogen.

Recent events, like the Flint, Michigan water crisis, remind us of the luxury our faucets afford us in the United States. The Safe Drinking Water Act (SDWA) sets standards for safe and allowable contaminants in drinking water, including nitrates, which are of most concern to pregnant women and infants as high nitrate levels are an associated cause of Blue Baby Syndrome1

In 2015-2020, 633 wells in California exceeded the safety threshold for nitrates, according to data from the California State Water Resources Control Board. Most of these wells are in the Central Valley.

Water pollutants from agricultural runoff have risen to the forefront of concern, but nationwide concentration of contaminants have actually trended downward over the last 50 years.2  This is to some extent due to the Clean Water Act implemented in 1972.3   Jayash Paudel and Christine Crago estimate in a recent paper that a 10% increase in nitrogen fertilizer application leads to a 1.5% increase in nitrogen contamination in waterways across the United States.

However, the effect on leaching into underground drinking water wells is not precisely known at the same scale. Noticeably, the locations of polluted wells cluster in the San Joaquin Valley in California, one of the most productive agricultural regions in the world. Almonds, for example, are the most valuable crop produced in California, saw rapid expansion from 2010-2015, and grow in a similar region where nitrate pollution is most severe. Almonds are also one of the most nitrogen intensive crops in California.4

These maps link agriculture geographically to the nitrification of water systems, but they don't prove that growth in almond production caused increased nitrate levels in wells. Perhaps instead the same geographic factors that make the Central Valley fertile could contribute to nitrates settling in the ground and water systems in these areas.  Teasing out the causal impact would require careful research.

More generally, agricultural fertilizers do have significant effects on water quality, and these effects are likely largest for rural agricultural populations, especially poor communities where there are high fixed costs for averting tap water.5   Most of California's poorest counties are in the Central Valley. 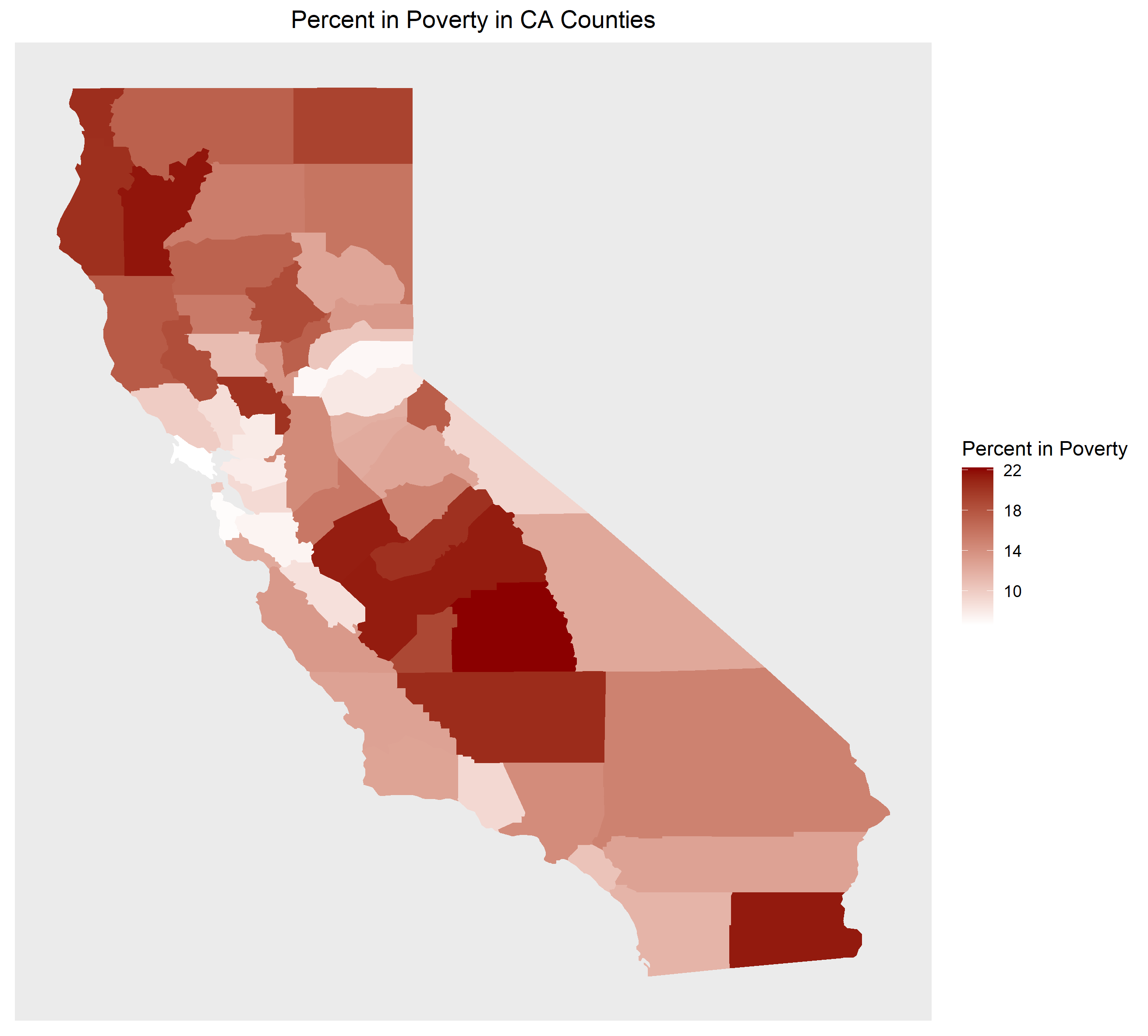 Tulare County has by far the highest nitrate levels and the highest poverty rate in the state. Avoiding contaminants is costly at the household or community level and is likely not feasible for many high-poverty communities.   Overall, nitrate levels tend to be somewhat higher in counties with a higher percent of people in poverty. 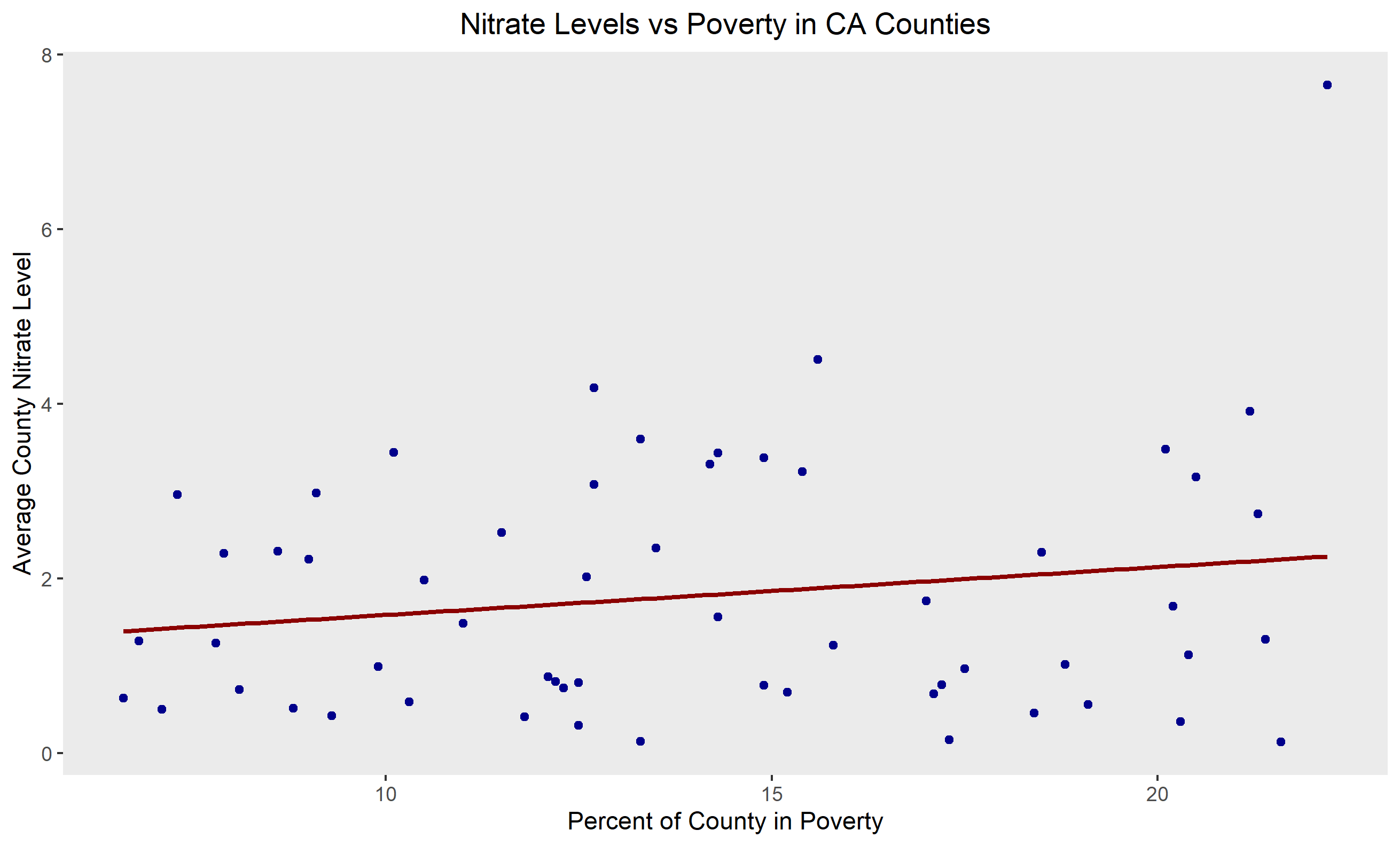 Outside of California, corn production highly impacts nitrate levels as farmers choose between planting soybeans and corn throughout the Midwest. Soybeans typically do not require additional nitrogen application since they are legumes. Legumes fix nitrogen from the air and release it into the soil, raising soil nitrogen levels.

Policy can offer unique solutions that consider farmer welfare and implementation costs, but prevent the unintended health consequences that will persist in the coming decades and may hit poor communities harder.  Policymakers and researchers must carefully balance these tradeoffs in determining solutions and adjusting current policy.

The figures in this article were created using this R code.