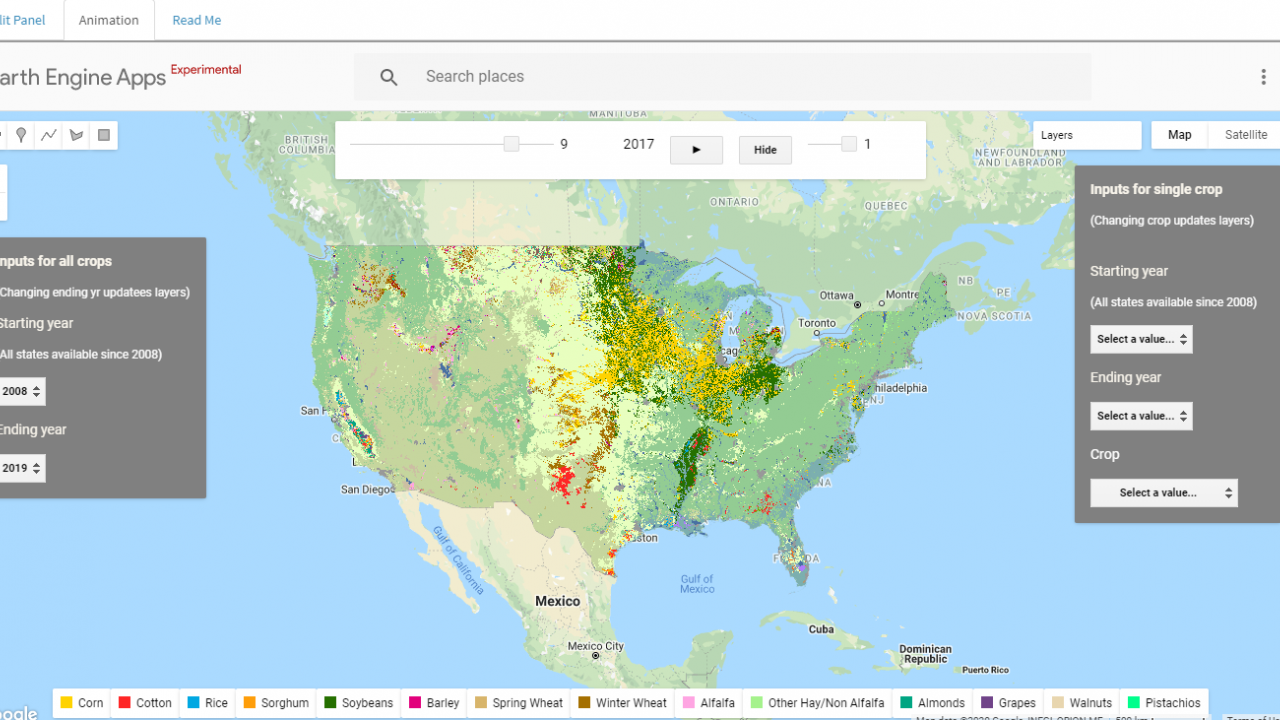 Use Someone Else's Big Computer

The sheer size and scope of satellite data can be daunting.  How do I even think about using my laptop to process data on land use for every 30mx30m pixel in the country?

The answer is to let someone else's computer do the heavy lifting for you. We currently use Google Earth Engine (GEE), but there are many other options such as Open Data Cube, Pangeo, and more.

GEE is a cloud-based computing platform for analyzing and visualizing spatial data. Its catalog contains an impressive array of spatial datasets that users can process, view, and export. It uses the JavaScript language, which is easier to learn than you think.

This week, we augmented our Cropland Data Layer app to show animations over time. You can use the app to view animations, as shown in the snapshot at the top of this article.

You can can also create your own animations in GEE by clicking the 'Read Me' tab and following the link to our GEE code.  You need a Google account and you need to sign up for Earth Engine.

We hope the code is self explanatory, and that you find it easy to modify to create gif animations that vary by crop and geographic scope. You can select any states or crops that you want, or just opt for all states or all crops. I used it to make the two gifs in this article.

The first gif shows the CDL for all crops in the US since 2008. Yellow is corn, green is soybeans, cotton is red, and wheat is light brown.

GEE appears to render the images slightly differently in 2013 and 2014. Let us know if you know what is causing that.

UPDATE (6/18): Thanks to Kel Markert on twitter, we have learned that the different rendering of 2013 and 2014 arises from a different default pyramiding policy used by GEE in those years. Pyramiding determines how GEE draws low-resolution images from high-resolution data. We will dive into this topic in the next couple of weeks to improve the consistency of our CDL visualizations across years.

The second gif shows five major crops in California. Note the dominance of rice in the north (light blue), grapes in the Napa Valley (purple), alfalfa throughout the Central Valley (pink), and the expansion of almonds (teal) and pistachios (lime green).