Everyone is Good at Something

Tomato fields are good at producing tomatoes.  Tons and tons of tomatoes.

By weight, California produces more tomatoes than any other crop, and it isn't close. In 2018, the state's farmers produced 12.6 million tons of processing tomatoes, which is nine times more than almonds, and more than double the amount of grapes or hay.

Each year, California farmers fill half a million gondolas like the ones picture above with tomatoes, piling them high enough that a few inevitably fall out on every corner taken by the truck on the way to the processor. 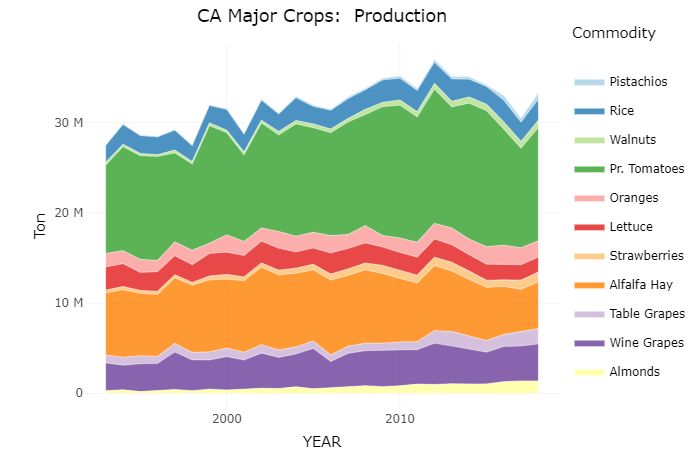 Processing tomatoes are different from those we put in our salads or sandwiches; they are less flavorful and have a thick flesh to enable them to withstand harvesting and transportation. They are harvested mechanically using technology developed in the 1950s by UC Davis scientists Jack Hanna and Coby Lorenzen. The harvesters pull the plant out of the ground, shake the ripe tomatoes off, and deposit them in gondolas. Trucks take them to processing plants to be turned into products like paste, ketchup, and sauce.

California farmers produce more than 50 tons of processing tomatoes per acre, which is more than twice as much as in the 1980s. In a pattern repeated for many agricultural commodities, increasing productivity leads to declining prices. If you increase supply, then the price goes down. 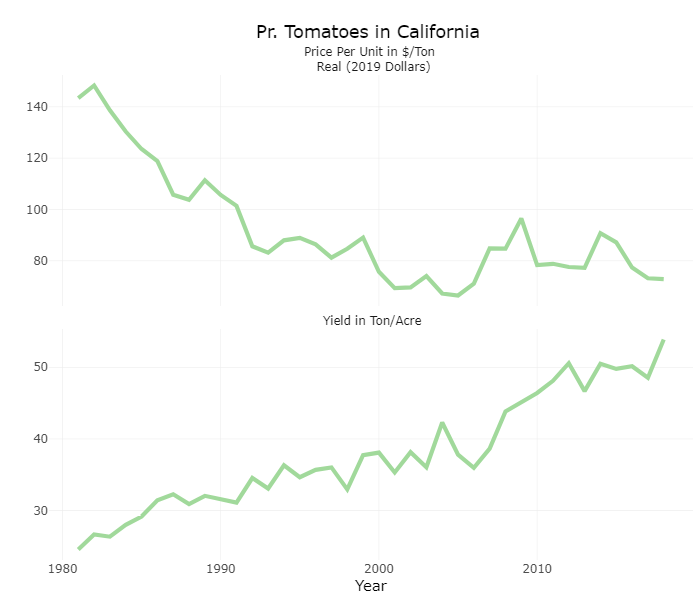 Of the 10 crops in our CA major crops app, tomatoes are rivaled only by strawberries in yield.  Farmers produce over five times more tons of tomatoes per acre than grapes, and 50 times more tons/acre than almonds.

However, tomatoes are much less valuable by weight than those products. A ton of grapes is worth 15 times as much as a ton of tomatoes, and a ton of almonds 60 times as much. One reason for the difference in value is water content. A tomato is 94% water, compared to 81% for grapes and 1% for almonds.

Putting the large tonnage together with the relatively low price, we see that tomatoes rank behind several other California crops in value. But, in weight, tomatoes are the clear winner. 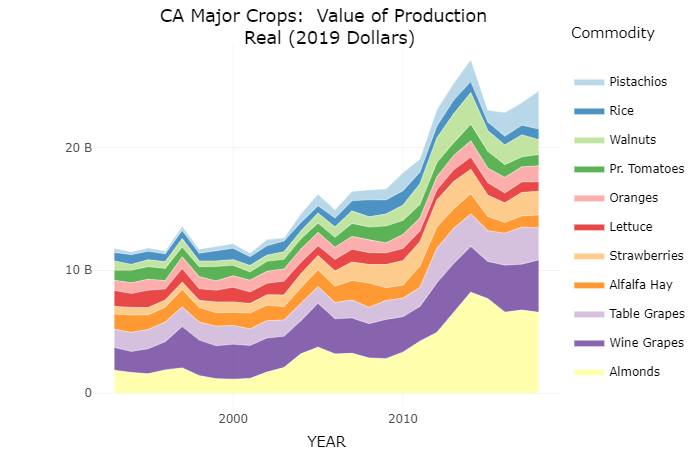 To investigate, view, and download the data in this article, go to our California Crops data app.