Last month, I wrote about sunflowers and bees and included the left half of the picture below.

The right half of the picture shows what the same field looked like last night. The beehives are gone, the male sunflower plants have been removed and the female plants are drying for harvest.  But, far more salient to me was the smoke in the air and the red glow above the hills created by the LNU Lightning Complex fire.

It's worse today. The fire exploded over night, and at the time of writing has burned 50,000 acres, is 0% contained, and is threatening the city of Vacaville. My heart goes out to the victims and first responders.

Smoke is a side effect of wildfires that spreads far beyond the burned area. It blocks out the sun and fills the air with particulate matter. It gives everything an apocalyptic orange hue.

The map below shows current PM 2.5 (i.e., particulate matter smaller than 2.5 microns) levels in California.  Orange areas are deemed unhealthy for sensitive groups, red areas are unhealthy for everyone and purple areas mean DON'T GO OUTSIDE. There are currently at least three major fires in the state. 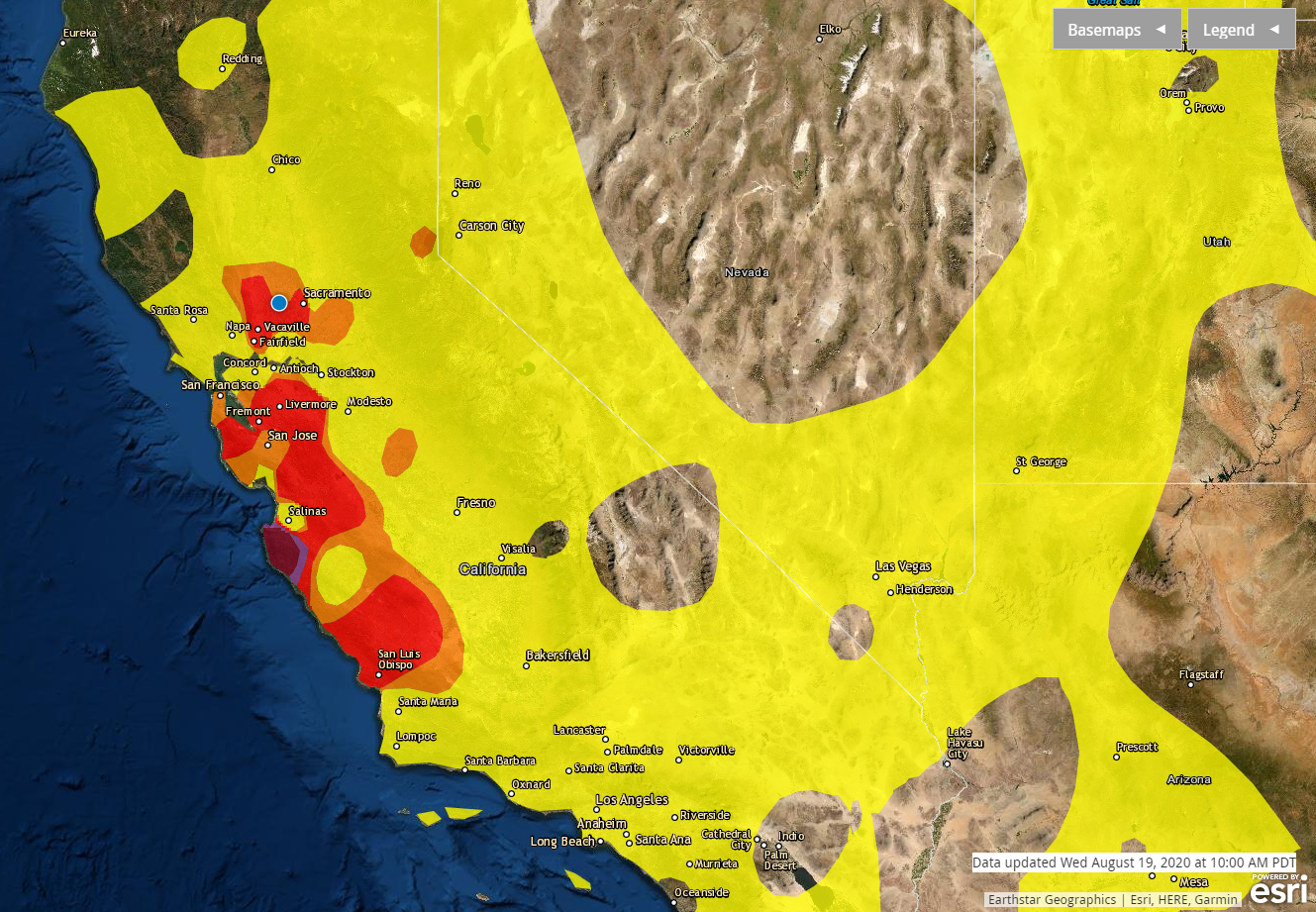 High PM 2.5 can severely damage the health of people who breathe too much of it. Agricultural workers are particularly vulnerable. Crops are ready to harvest when they're ready to harvest, and they won't wait for the smoke to clear. CA state regulation §5141.1, which went into effect on July 29, 2019, requires that workers use N95 or similar respirators when the air quality index exceeds 151 (red in the map above).

In theory, wildfire smoke could reduce crop yields by blocking sunlight and lowering the temperature, but it tends not to remain in the air for long enough. I am not aware of scientific evidence that crops are significantly damaged by "breathing" in smoke.

Wine grapes are an exception. Grape skins are permeable, so smoke can get into the fruit and taint the wine.  However, a recent UC Cooperative Extension study showed that the chemicals that taint wine tend to dissipate in the atmosphere within 2 hours. This means only vineyards close to the fire are likely to suffer wine taint. Several wineries in Napa and Sonoma Counties have sued their insurance companies for coverage of wine-taint losses from the 2017 wildfires.

The wine country fires of October 2017 were the the most destructive in California history (since surpassed by the Camp Fire of November 2018). However, the graph below shows no apparent drop in the value of Napa and Sonoma County wine grapes in 2017. This is partly because the fires occurred after most grapes had been harvested, partly because irrigated vineyards are less likely to burn than the surrounding dry hills, and partly because only vineyards very close to fires would have produced smoke-tainted wine.

Wildfires can destroy the livelihoods and lives of those in their path, and breathing wildfire smoke is damaging to human health. The effects of smoke on crop production are small by comparison.