Shelling out for Peanuts

This article was written by UC Davis ARE PhD students Madeline Turland and Devin Serfas. It is the first in a series of excellent articles written by students in my ARE 231 class this fall.

As global meat prices continue to rise, many consumers are finding it more attractive to consume vegetable protein as it is cheaper, and in some cases healthier than meat. Although not traditionally regarded as an important crop, the supply of peanuts (or groundnuts to the international community) has steadily risen over the past several decades.

Likely originating in South America, peanuts have become a popular ingredient in the cuisine of many different cultures, and a staple in lunchboxes across the USA. As of this year, per capita peanut consumption reached an all-time record level of 7.6 pounds in the United States. This is up 2.3 pounds from 2000. Aside from peanut butter sandwiches and Oh Henry chocolate bars, peanuts are popular in Asian cuisine and gourmet salads as a topping or dressing. 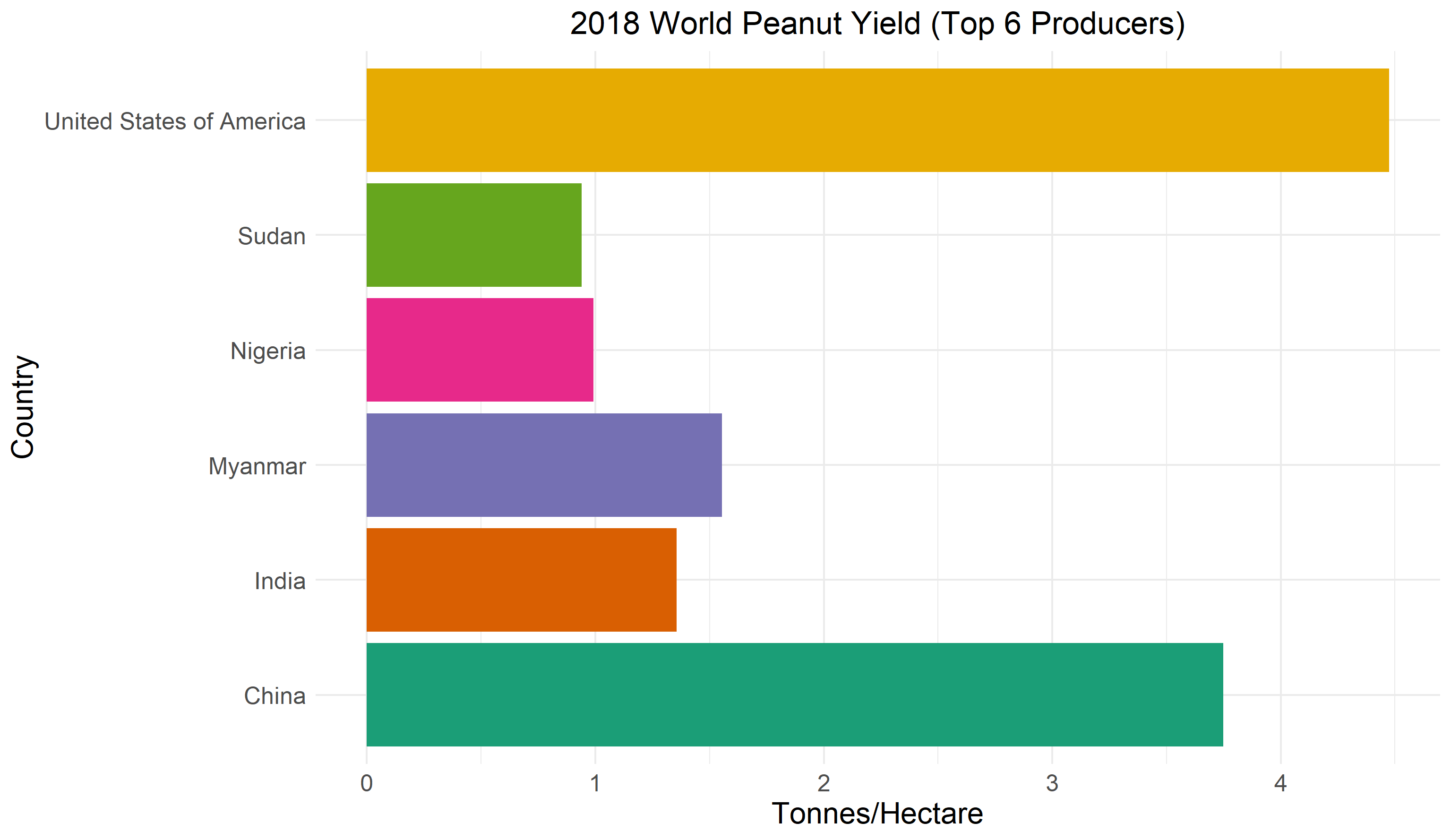 United States production trends have been differed from global trends. Since 1961, there have three distinct phases. From 1961 to 1979 peanut production increased 139%. Then from 1979 to 2011 production was relatively constant. Since 2011 production has increased again.

Production increases are largely due to increased yields rather than an increase in growing area. Seeded acres have remained relatively constant over time, except for a slight bump in the late 80’s and early 90’s. However, there does seem to be more volatility in the area harvested in recent years.

Recent peanut yield gains in the United States align with the elimination of production quotas in 2002. Like many other crops, peanut producers received substantial government support through the 1980s and 1990s. Except for tobacco, peanuts were the last crop to be controlled with production quotas; tobacco quotas were eliminated in 2004.

The quota system was replaced by support programs similar to those available to producers of other program crops. Under the quota system peanut production was fixed within each county. After 2002, peanut producers were able to shift planting to more productive counties, and a yield boost followed.

Another reason for yield gains could be better harvest technology. Tractors that plant and invert peanuts are now equipped with autosteer, making it easier for farmers to expand production as well as leave fewer peanuts in the ground, saving farmers up to $37,000 per year.

What does the future look like for US peanut producers? In 2019, Georgia grew almost 50% of all peanuts in the US. Most of the production occurs in the southeastern United States. This region is prone to hurricanes and tropical storms. Due to climate change the severity of hurricanes and tropical storms is increasing, so peanut producers in the US can expect more supply side shocks in the coming years. For example, Hurricane Matthew in 2016 caused some peanut farmers in South Carolina to lose 1000 pounds of peanuts per acre.

Despite volatile weather, increasing yields and strong demand should allow peanut farmers to stay profitable. After all, peanut farmers have made it this far without going nuts.

The figures in this article were created using this R code.