Out with Tobacco and in with Sweet Potato

This article was written by UC Davis ARE PhD student Mohan Chen.  It is the second of six excellent articles written by students in my ARE 231 class this fall.

In 1965, more than 40% of American adults smoked cigarettes. In that year, the United States was the largest producer of tobacco in the world. However, US tobacco production has tanked as other countries entered the market and as people quit smoking. US production of unmanufactured tobacco decreased about 81% between 1961 and 2020, and smoking rates declined by two thirds over the same period. 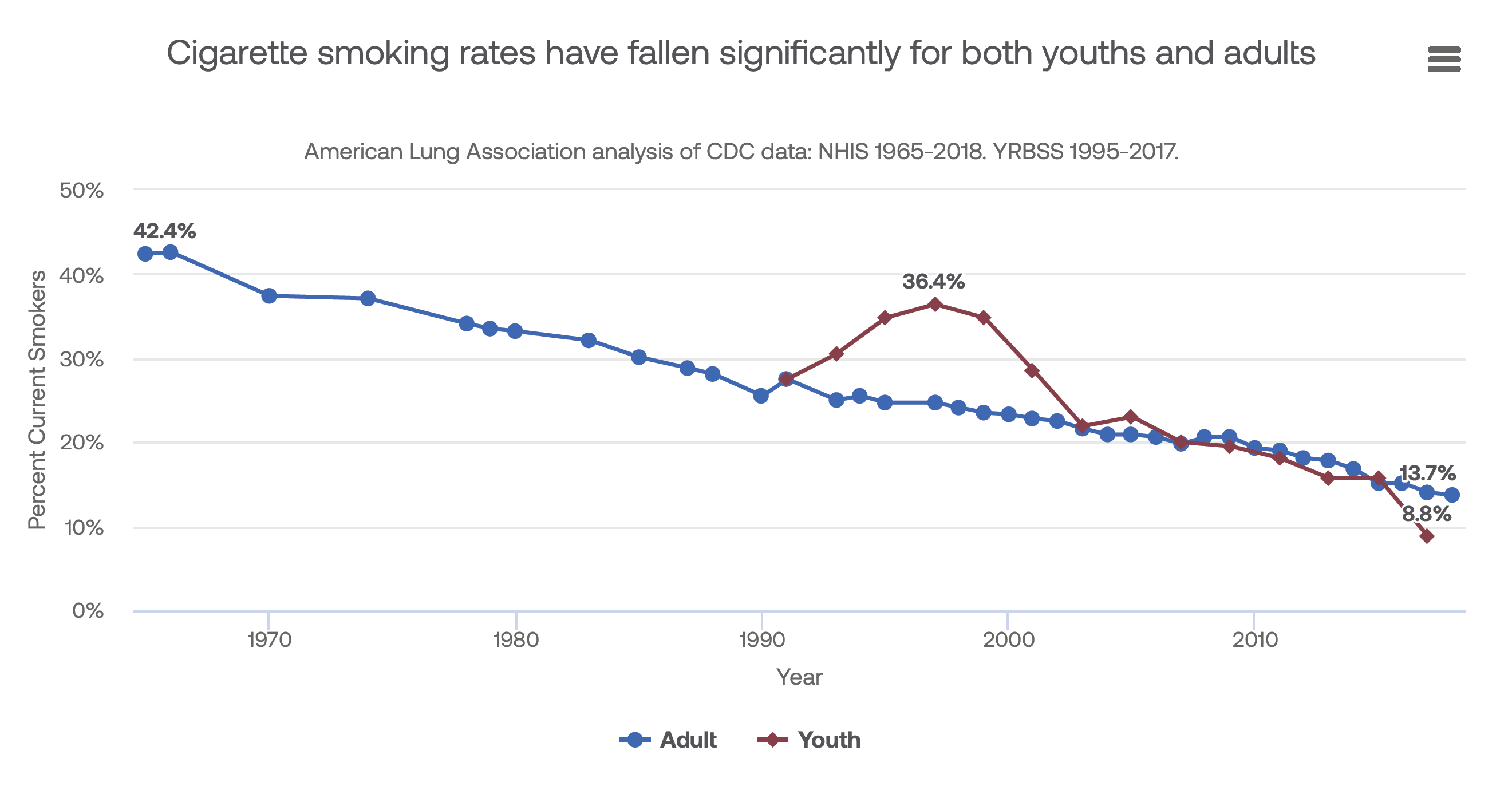 Coinciding with the decline in US tobacco production has been a marked rise in sweet potato production, especially in the past 20 years.  Sweet potato was used by USDA to compensate for the shortage of wheat during World War 1, and was later widely consumed by average people who couldn’t afford sugar. Its recent boom coincides with healthy lifestyle trends: Americans are trying to control sugar in regular diet and consume more fibers and antioxidants. Sweet potato production has increased about 150% since 2000. 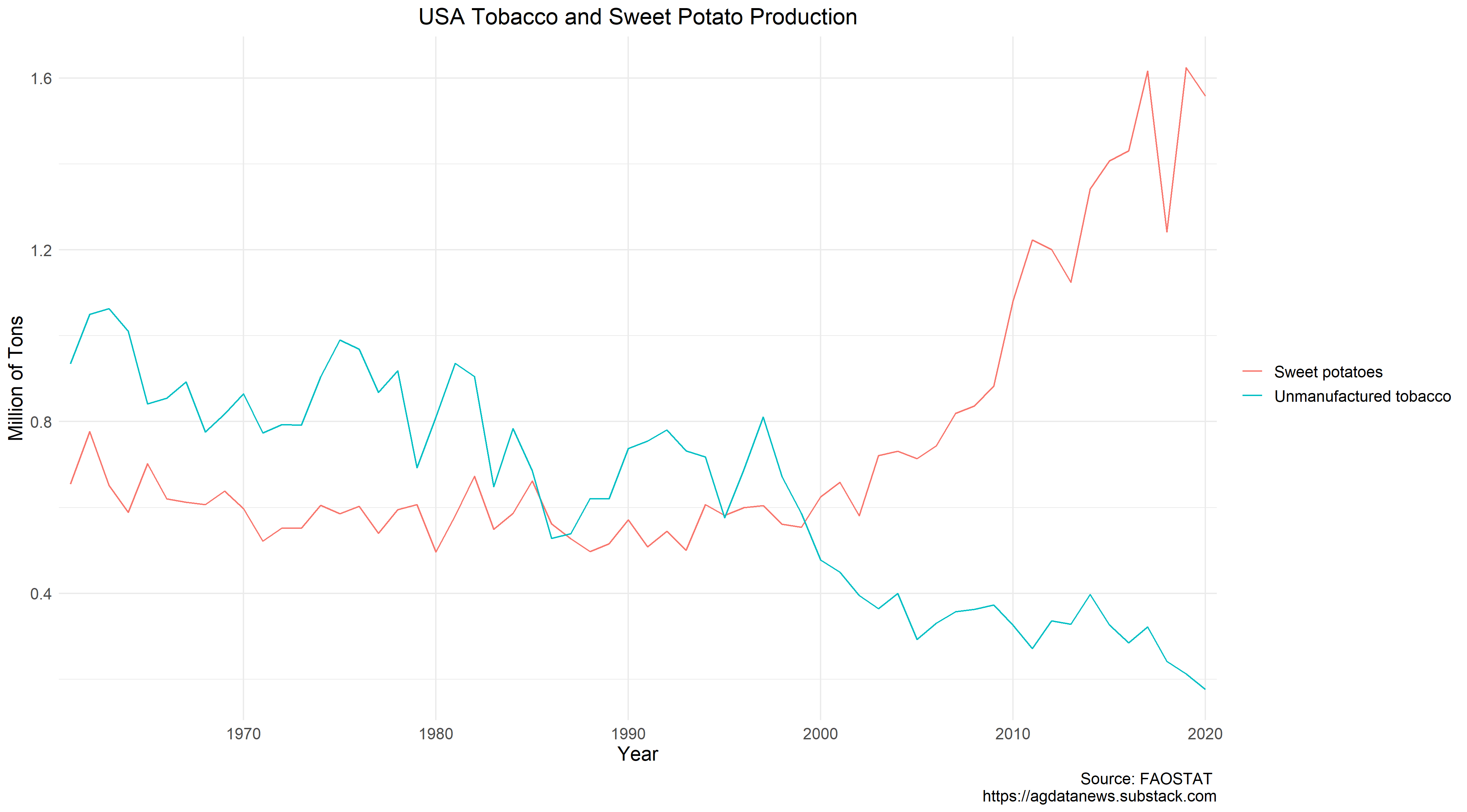 Is there a connection between tobacco and sweet potatoes?

The answer to this question is in North Carolina, which is the largest producer of tobacco and sweet potatoes in the United States.

Tobacco and sweet potatoes are currently the sixth- and seventh-ranked NC crops by acreage.  The top crops in the state are corn, soybeans, wheat, cotton, and hay, but other states produce much more of these crops than does NC. 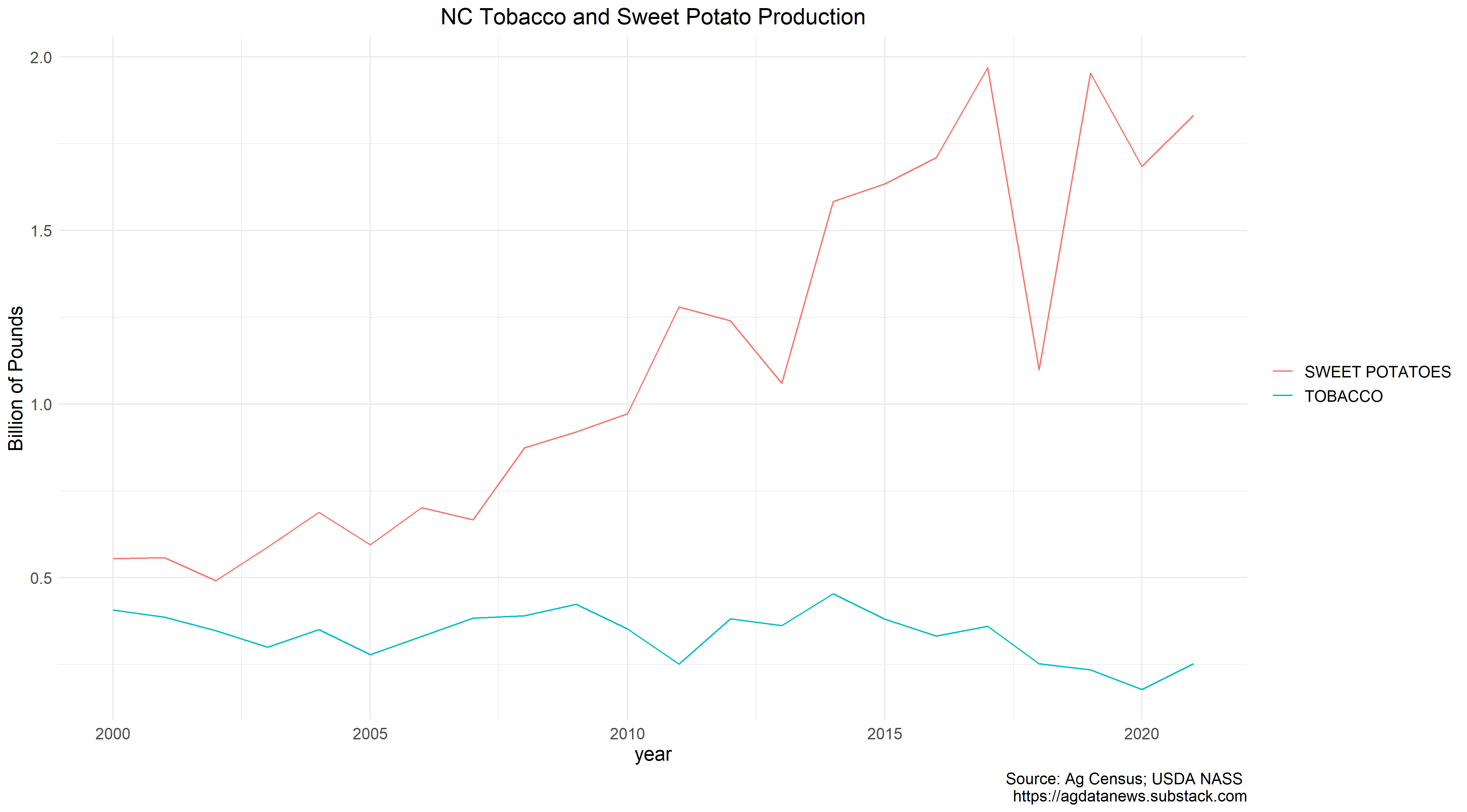 According to the Agricultural Census, the number of NC farms devoted to tobacco has decreased about 90% in the last 20 years, while tobacco acreage has declined by 47%. NC farmers planted 150,000 fewer tobacco acres in 2017 than in 1997.

With all the shrinkage of tobacco fields, other crops must have filled the vacancy. Some of tobacco fields were replaced by sweet potatoes. NC farmers planted 63,000 more acres of sweet potatoes in 2017 than in 1997. Media have reported that tobacco farmers in NC have switched to sweet potato because they saw large potential markets (e.g., here and here). More importantly, sweet potato and tobacco are both labor intensive crops, so it’s convenient for the local workforce to make the transformation.

Sweet potato fields are mainly located at the center of the state, where the climate is warmer and more humid. Sampson County had the highest production of 274 million tons in 2021, closely followed by Wilson and Johnston Counties, with 249 million tons and 215 million tons, respectively. These are and were also major tobacco producing counties. 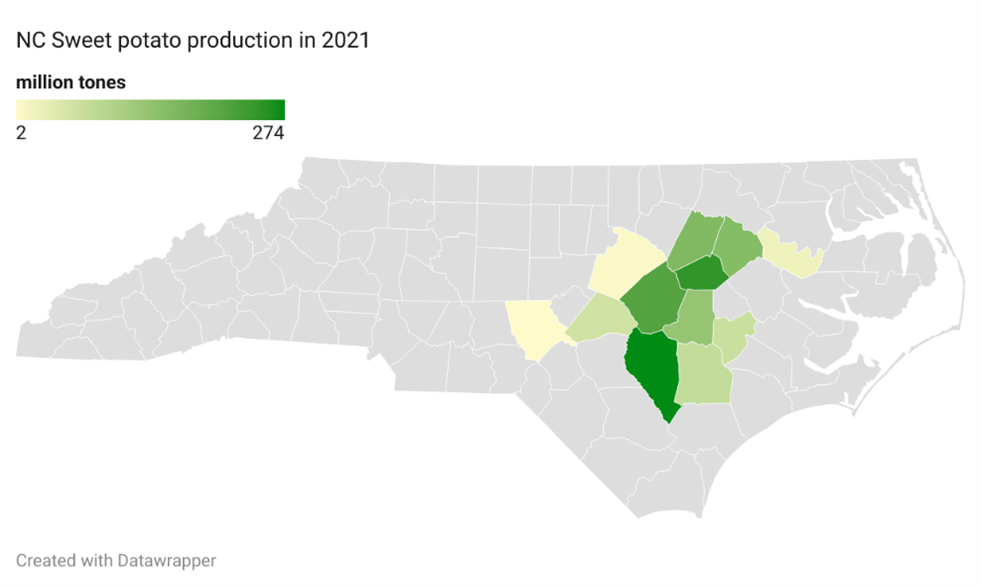 NC produces about two thirds of national sweet potatoes. The other states with significant production are California and Mississippi. Louisiana, Florida, and Arkansas have also reported production in some years. 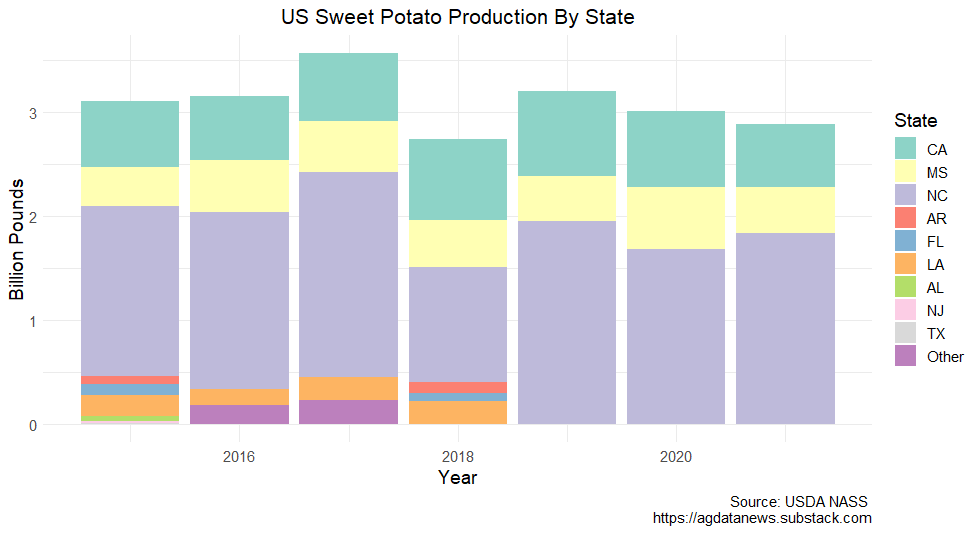 Worldwide production of sweet potato was about 900 million metric tons in 2020. China accounted for more than 50% of the worldwide production, followed by Nigeria, Tanzania, Ethiopia, and Indonesia, which are all low-income countries. USA was the world’s eighth largest producer in 2020. 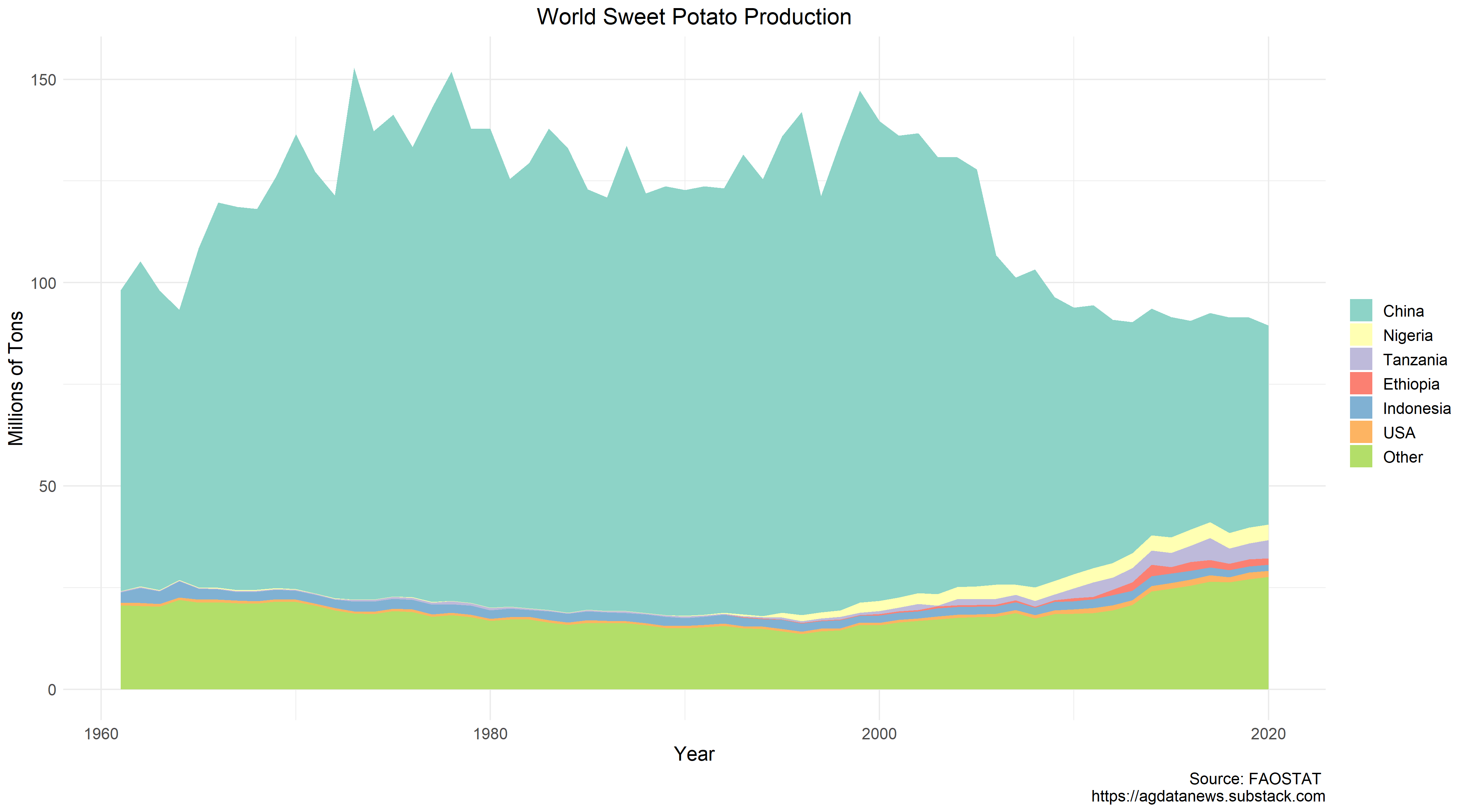 Due to its high-nutrition and low-cost attributes, most of the production of sweet potato in low-income countries was consumed domestically by people and livestock.  Hence, it’s natural that the US was the number one exporter of sweet potatoes in 2020, which took up about 27% of world’s gross export value. China was the largest sweet potato exporter in 1990s, but the US caught up rapidly after 2000 and since then the world has witnessed a huge expansion of global trade in sweet potatoes. 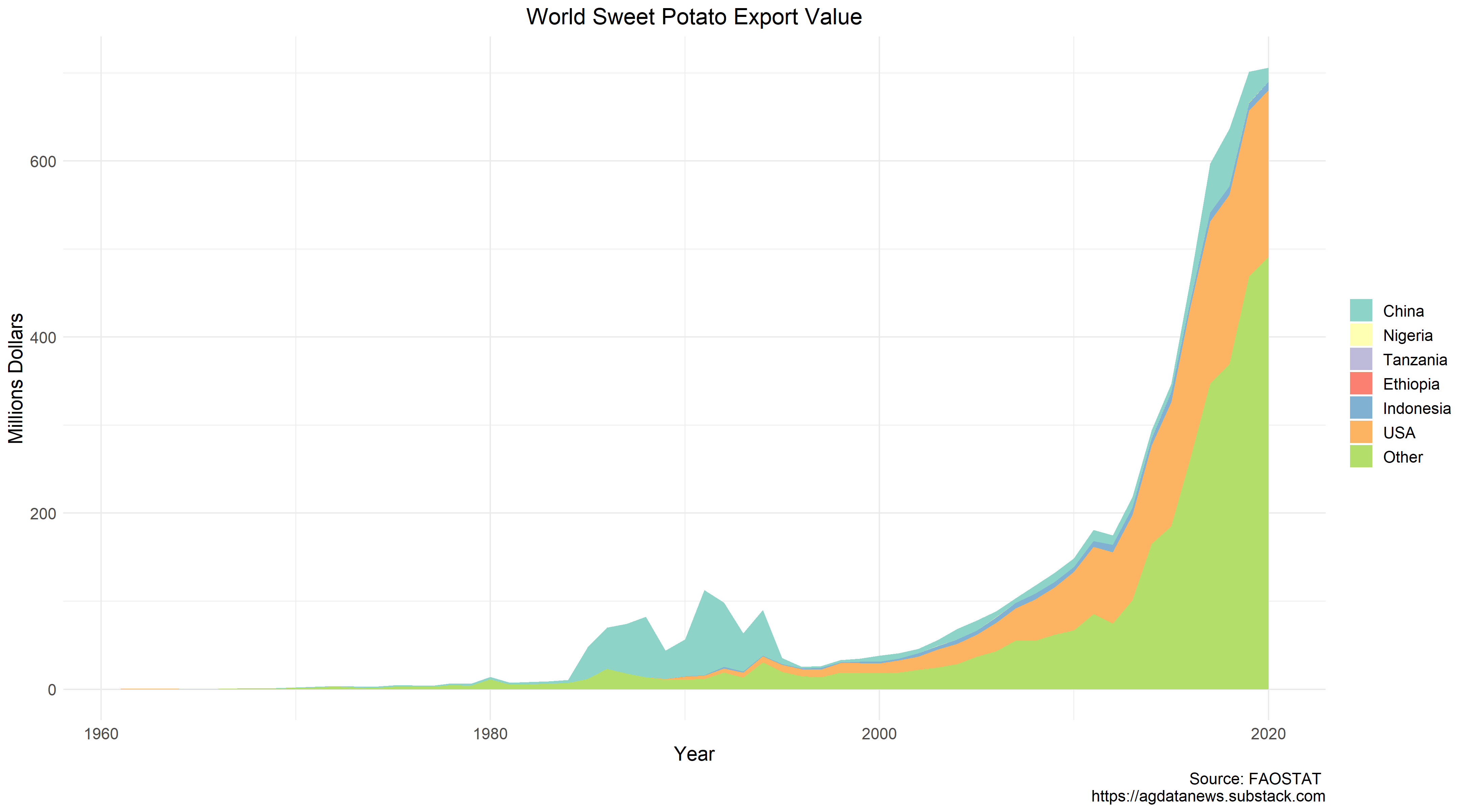 This week, millions of Americans will sit down to a Thanksgiving dinner of turkey, gravy, mashed potatoes, sweet potatoes, pumpkin pie, and more. Compared to 50 years ago, many fewer will smoke a cigarette after their meal. However, the presence of sweet potatoes on their plate means North Carolina agriculture is still represented.

I made the graphs in this article using this R code.

Note: An earlier version of this article had Michigan rather than Mississippi as the third leading producing state for sweet potatoes.