Please Give Me French Fries, Not McNuggets In My Burger Meal

This article was written by UC Davis ARE PhD student Hyunjung Lee.  It is the third in a series of excellent articles written by students in my ARE 231 class this fall.

Last summer, I went back to my home country to see my family and friends, proud of myself for successfully completing the messy first year of my PhD life. Although I had only one month to eat as much Korean food as I could, I decided to eat a meal at McDonald's, the symbol of America, hoping not to lose my sense of American life.

However, when I entered McDonald's, I doubted my eyes because there was a notice that if you order a burger meal, you will get cheese sticks or McNuggets instead of French fries. These items are more expensive than French fries, so why is McDonald’s offering them?

I hadn’t heard of a shortage of potato production. In fact, potato supply has been relatively stable in the past decade after rising significantly in 2010. Perhaps this substitution is related to the new BTS meal, which is a popular new McDonald’s meal named for the popular K-pop band? 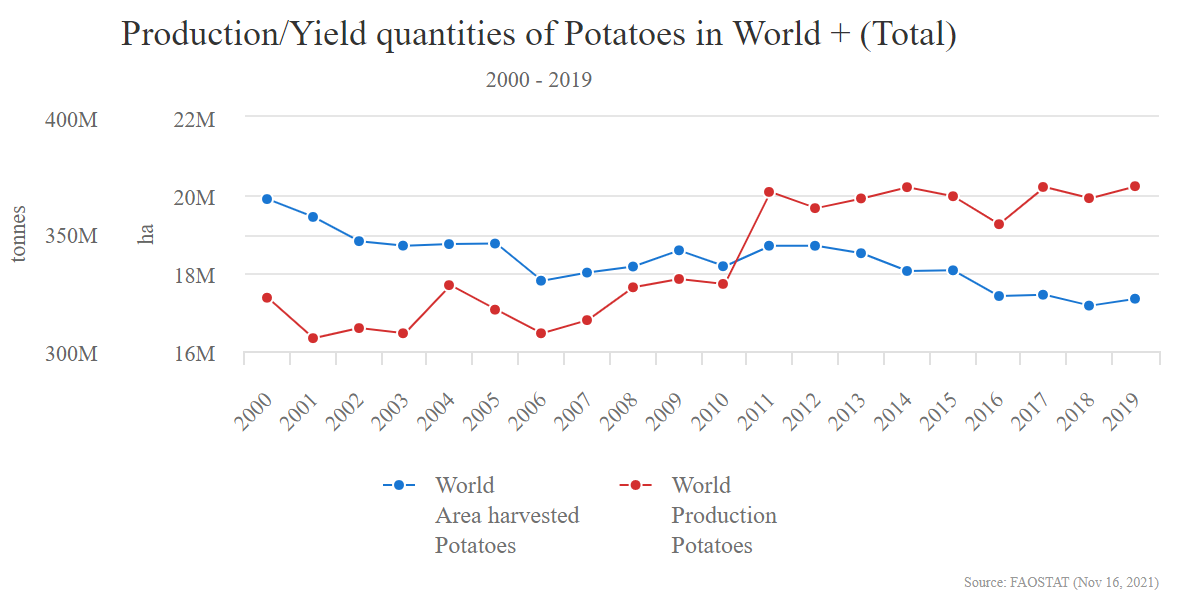 As a prospective agricultural economist, I began to look for the cause of this phenomenon. It was also my calling as a person who loves French fries.

I found the answer: COVID-19 has disrupted supply chains and caused a shortage of frozen potatoes in Asia.

To explain this phenomenon, it is necessary to understand the supply system of potatoes. Countries in Asia produce 45% of the world's potatoes. However, the world potato supply chain is unique because the types of potatoes produced and consumption patterns vary from region to region.

In Asia, most potatoes are consumed fresh. Specifically, consumers in Asia purchase fresh potatoes from supermarkets or farmers' markets and use them for cooking at home to prepare meals such as soup, stir-fry, and for other culinary purposes. They cut potatoes and use them without any additional processing. For this reason, Asian consumers tend to prefer small, round-shape potatoes.

In contrast, processed potato products account for a large proportion of consumption in the West. Western consumers usually use frozen, and refrigerated processed potatoes, or potato consumption is commonly made in the foodservice industry. Thus, the size of potatoes they prefer is larger than that used by Asian consumers.

The important fact is that the two potatoes are not interchangeable due to these production and consumption characteristics. Therefore, although South Korea is very close to China, the world's largest potato producer, and Asia produces nearly half of the world's potatoes, a paradoxical situation is occurring in which the supply of French fries is not smooth in Asia.

Meanwhile, the United States is the largest exporter of frozen potatoes for French fries used in major fast-food restaurants in South Korea. However, international shipping volume has surged along with the increasing number of fully vaccinated people and signs of economic recovery in major countries. According to PotatoUSA, despite the return of demand, a shortage of containers, port congestion, delayed and canceled shipments, and doubled costs in 2021 continue to hinder U.S. potato exports.

In addition, importers have begun to ration the limited supplies, prioritizing large chains and established accounts and this resulted in shortages of frozen, dehydrated, and fresh potatoes in many markets. PotatoUSA said that “as restrictions eased and the markets adjusted, demand began to return in the fall, but then shipping issues began to limit the ability of U.S. exporters to meet this demand.”

Experts predict that container freight rates will continue to rise until the end of this year as supply chain turmoil continues. In anticipation of a global economic recovery, manufacturers are increasing production and increasing inventories again. However, due to the explosion of containers, unloading at the port is not smooth. The ports are not able to handle the increased container capacity. That is the main reason why the shortage of French fries has continued since last June in South Korea.

The headline picture for this article is a notice from McDonald's in South Korea, which tells us that they offer cheese sticks or McNuggets instead of French fries. Trust me.