All In On Grass Seed

Our family dog, Milo, appears to think he is a sheep. He has a penchant for grazing on the lawn, especially this particular patch. As is apparent from the picture, we will need to re-seed it, and when we do, we'll most likely get seed from the Willamette Valley in Oregon.

Willamette Valley has gone all in on grass seed.  It devotes a high percentage of its land to the crop and produces most of the grass seed in the country. It provides a good example of agglomeration economies --- the force that causes technology firms to cluster in the San Francisco Bay Area and potato farmers to cluster in Idaho.

The western United States is mostly mountains and deserts. Nestled in between are several fertile agricultural regions, typically specializing in a few crops and irrigated by water from the surrounding mountains. The largest are Columbia Plateau in Washington and Northern Oregon, Idaho's Snake River Plain, and California's Central Valley. Perhaps less well known for its agriculture, and less perceptible on the map, is Oregon's Willamette Valley, which stretches from Portland in the north to Eugene in the south.

Nationwide, 80% of grass seed acres are allocated to ryegrass or fescue, which are commonly used for lawns, turf and pasture. In Oregon, 90% of acres are one of these two varieties.

The only counties with more than 15,000 acres of grass for seed were in the Willamette Valley. The highest-acreage counties were Linn with 118,000 and Marion with 74,000. 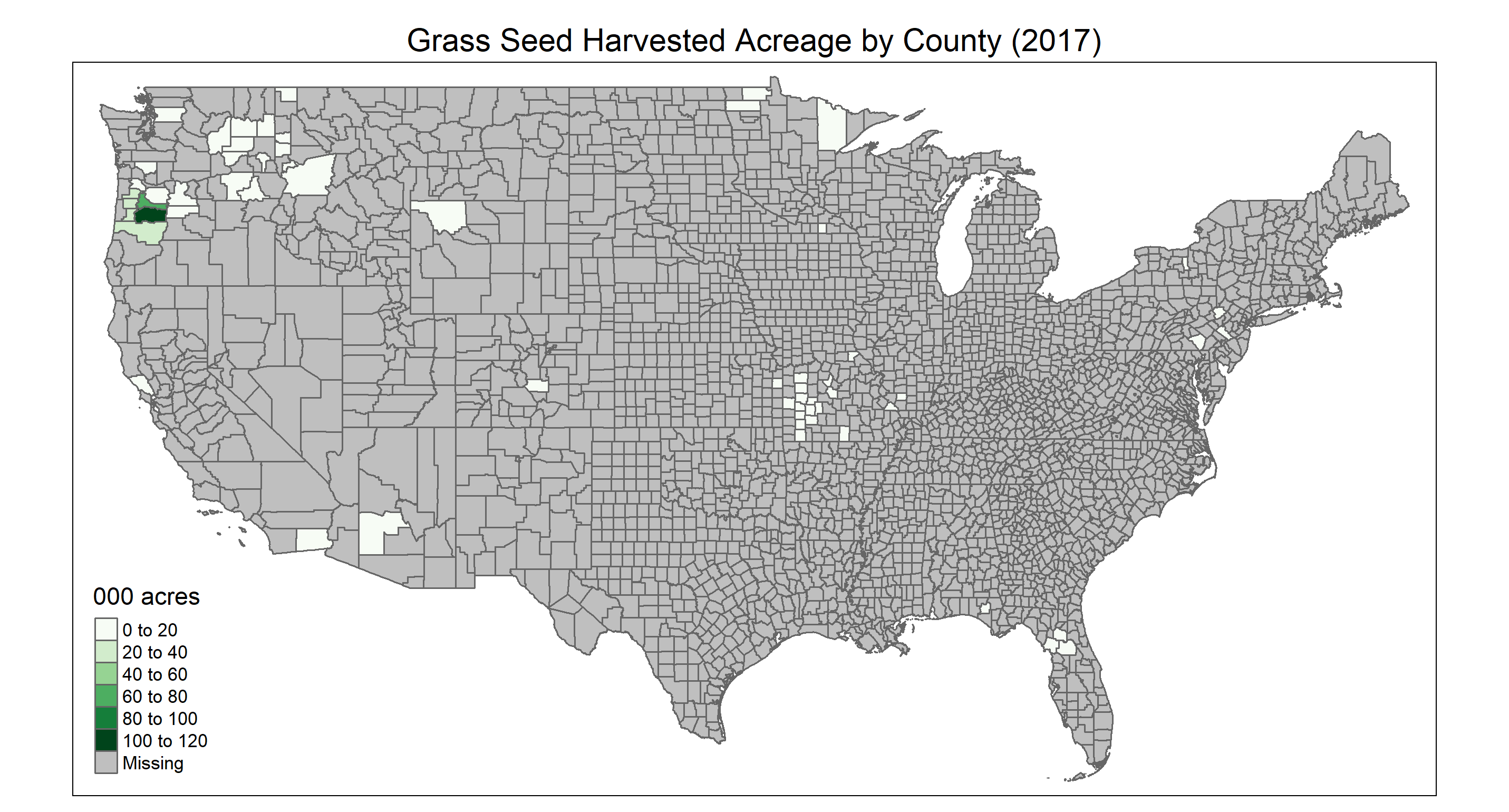 Grass seed used half of harvested acreage in Willamette Valley in 2017, with hay the next most produced crop.  Hay is what you get if you harvest the grass before it goes to seed. Most Oregon agriculture outside the Willamette Valley is in the northeastern part of the state, where wheat and hay are major crops.

It's clear that grass grows well in the Willamette Valley, and that it can be productively harvested for seed; otherwise they wouldn't grow it there. It is possible that the region's wet winters and dry summers make it uniquely productive for grass seed. However, I suspect there are numerous other places in the west that could also produce grass seed productively.

So, why has the Willamette Valley gone all in on grass seed?  A thorough answer is a good subject for a research project, but it likely reflects a combination of historical accident and agglomeration.  Forest Jenks planted the first commercial ryegrass in Linn County in 1921.  Over the next couple of decades, farmers discovered that grass seed was a suitable crop in the erodible soils on the valley’s eastern foothills.

After the second world war, an industry built up around grass seed. Numerous seed companies and processors established themselves in the area, so growers now have a network of buyers for their product and a suppliers for their inputs. These networks reduce costs and make growing grass seed more profitable there than it would be in a place with the same growing conditions, but without the networks.

In short, growing grass seed is a good choice for a Willamette Valley farmer because everyone is doing it.   And Milo is doing his best to keep them in business.

I generated the graphs in this article using this R code. Huge thanks to UC Davis ARE PhD student Seunghyun Lee for helping me with it.