This article was written by UC Davis ARE PhD student Scott Somerville. It is the third in a series of excellent articles written by students in my ARE 231 class this fall.

COVID-pandemic lockdowns, in early 2020, motivated consumers to explore healthier food options. Oats, in particular, received increased media attention, with news reports, new recipes, and articles in lifestyle magazines. Humans have eaten oats and fed them to livestock for thousands of years. Today, the media touts oats as a super food. If demand for oat based food products increases suddenly, where will the oats come from?

Oat supply is different from other small grain cereal supply for three main reasons. Oats rarely trade internationally, have little inter-year storage, and have under achieved in yield gains in the past fifty years.

Consumers demonstrated an increased interest in oat products via increased online research. Google searches for “rolled oats” doubled in April 2020 compared to the same month in the previous four years.  Pre COVID, rolled oat searches follow an obvious seasonal pattern, peaking in January each year. Searches for “oat milk” have been trending upward since 2015, increasing by a factor of 7, through October 2020.

Oat products are on the minds of consumers. This is, therefore, a good time to take stock of the global oat market. 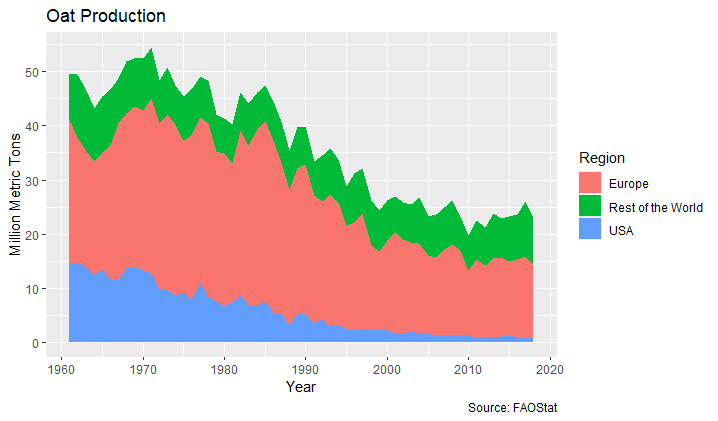 On marginal land, growers favor oats for their ability to tolerate cold, wet climates that are unsuitable for wheat production. In productive arable regions, oats are grown in rotation with cereal and oilseed crops. The large root system of oats capture phosphates and potash not accessible to other crops, an agronomic advantage in the crop rotation.

The graph below shows a large disparity in oat yields between countries. Poland, the largest producer in the European Union, achieves yields of 2.5 tons/hectare, while growers in the United Kingdom achieve yields of about 6 tons/hectare. While extreme, a similar yield gap is seen in the yield of other small grain crops. Most of Poland's oats are sold to Germany and the Netherlands as livestock feed. A larger proportion of UK produced oats are processed in the UK, and are used as human food. 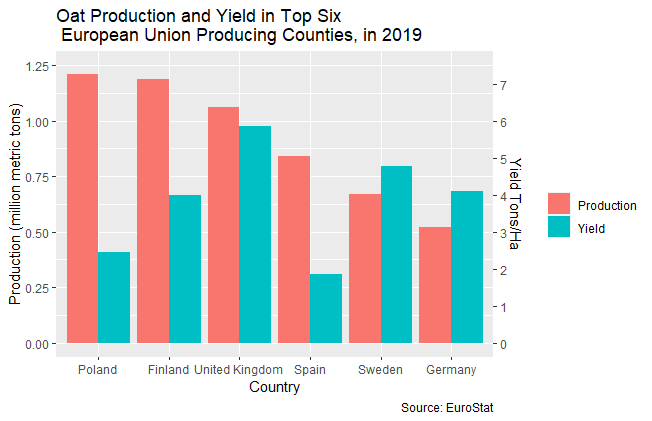 Let's focus on Poland, the EU's largest oat producer, and the UK, the highest average oat yield among the top six producers. Beginning in the 1970s, wheat and oat yields started to diverge in both countries. Breeders have focused on wheat more than oats, but both crops can benefit from the same crop protection, fertilizer, and crop husbandry technologies. Since the 1980s Polish oat yields have barely improved beyond 2.5 tons/ha, while UK oat yields have increased by 50%. Polish wheat yields have also increased by about 50%, suggesting that the technologies available to Polish wheat growers are not being used in oat production. There is clear potential for increased oat production from the intensive margin. 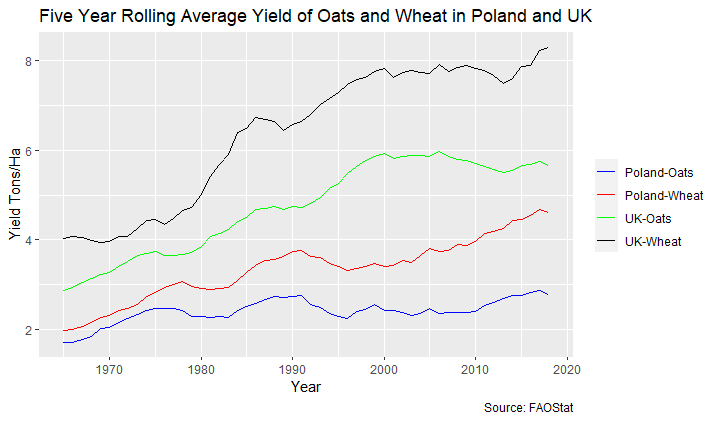 Oat use as a percentage of total oat supply is a consistent pattern since 2016. In 2015-16 increased supply of wheat, barley, and maize in Europe coincided with reduced supply of oats, and reduced oat use in the livestock feed sector. Industrial use category includes bioethanol and biomethane production. Oats are not used in these markets. 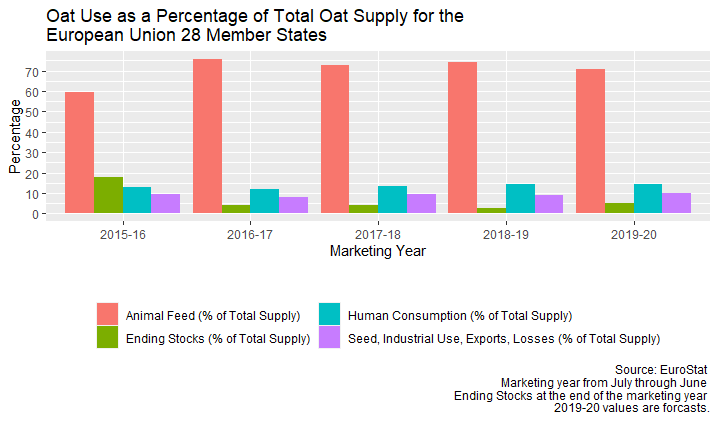 Oats are mostly grown, processed and used in the same country. About 10% of oats produced in EU member states are exported from the country of origin. Trade of oats between the EU and the rest of the world is tiny. While the intra-EU trade of oats has quadrupled from 2002, the intra-EU trade of processed oats has increased by a factor of 6 from a very low base. The graph below reports trade in the EU 27, which excludes the UK. A large share of the extra-EU27 trade can be attributed to trade with the UK. This does not capture the trade of oat products like breakfast cereals, oat milk or products where oats are an ingredient. 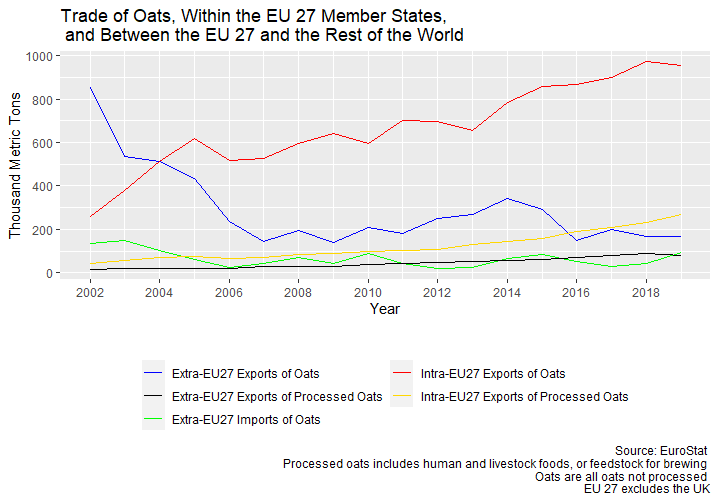 Europe is a major producer and consumer of oats. In the EU there are large disparities in the yields achieved in different countries. The livestock feed industry is the dominant market for oats. Ending stock of oats are a small share of total quantity of oats supplied, compared to other cereals, and there is little international trade in oats.

If demand for oat based food products increased, where will oats come from in the short run? Most likely oats will be diverted from the livestock feed sector. There are many substitutes for oats in livestock rations, so a small shift in demand for food grade oats will increase the price, and divert oats into the human food market. Longer term, an increase in oat price will result in increased production in the region or country where demand has increased.

The figures in this article were generated using the R code in this file:  oat_supply.Rmd