Last week, New York Times Opinion published a video on the environmental effects of modern agriculture. They titled it "Meet the People Getting Paid to Kill Our Planet," which tells you a lot about the conclusions they draw and the tone with which they present them.

Here's a link.  Watch it for yourself.

The thesis of the video is that American agriculture now consists of a small number of large farms that exert political power to avoid environmental regulation while they rack up huge profits.

They got some things right. The agricultural lobby is very good at avoiding regulation and extracting money from taxpayers. There are serious environmental issues in agriculture, including greenhouse gas emissions and water pollution.

Here's what I think they got wrong.

1. They ignore benefits. Farms have gotten bigger and more productive over the past century, which has lowered food prices and reduced pressure to expand cropland. US farmers now produce almost five times the output they did in 1910, yet aggregate inputs (including land, labor, and capital) are about the same. This is good for people and the environment.

Looking in more detail at inputs, we see that land in farms has declined by 25% since 1950 and labor has declined by 85%. Capital inputs have increased to compensate for these declines.

2. Profitability and Power. Early in the video, they point out that farmers make $116 billion in annual profit. That's about what Apple made in 2020, but in agriculture it is spread over thousands of farmers. Moreover, US farm profits have been about $100 billion for 75 years, so this level of profits is not a product of new large farms. A significant percentage of these profits come from the government, underscoring agriculture's lobbying power.

3. Conflating Big with Bad. Too often, analysts romanticize the phantom local small farmer and push policies such as buy-local mandates without a clear idea about whether and for whom they would be better than the status quo. They forget that the status quo produces a lot of low-price food and uses a lot less land to do it.

There is nothing inherently worse about big farms than small farms. Both large and small farms have potential advantages and both can cause environmental harm. Large confined animal feeding operations produce more pollution than cattle on pasture. However, small organic farms require more land to produce the same output and may generate more nitrogen pollution. Large farms can be easier to regulate, as they can employ someone to handle compliance.

4. Simplistic characterization of emissions. Farms cycle greenhouse gases. They absorb a bunch of CO2 and emit a bunch of CO2, methane, and N2O. Net emissions are what matters and they are hard to measure and regulate, even without political barriers.

5. Wishing Away Meat. The video implies that the reason there aren't more vegans in the US is because of the ag lobby. However, the main reason people eat meat is because they like it. When countries get richer, people eat more meat. Meat production is resource intensive because you have to grow plants to feed the animals rather than just eating the plants directly.

We could reduce the environmental footprint of our food system by eating less meat, but people don't want to do that. The main reason only about 5% of Americans claim to be vegetarian (many fewer are vegan) is that most people are not persuaded by the moral argument against eating meat. 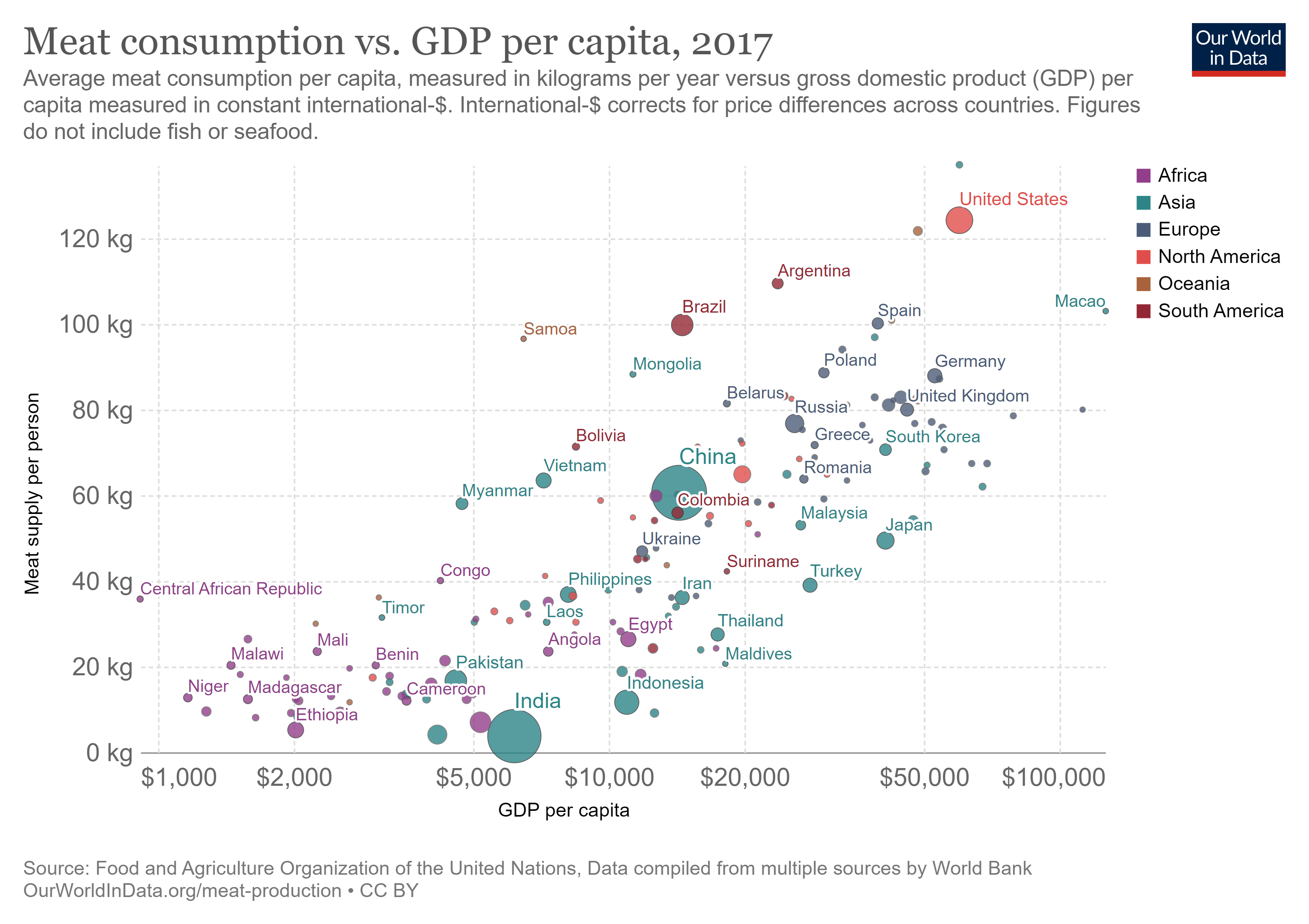 6. Selective editing. It's a standard trick that I subconsciously appreciate in pieces that support my views and don't like in pieces that contradict my views or misrepresent people I know. The video shows my friend Jayson Lusk, an excellent economist, using the phrase "cow tax" and implies that he is part of a nefarious conspiracy to avoid methane regulation of cattle. See his full interview here.

I encourage people in agriculture to ignore the hyperbolic tone and listen to the message of this video. Don't take it as a personal attack, but as a chance to ask: Is there is a better way?

Answer: Yes there is.

It is possible to have a regulated and vibrant ag sector not reliant on government "support". I wrote here about how the New Zealand government stopped its generous agricultural subsidy programs in the 1980s, leaving farmers to fend for themselves. Now, 40 years later, New Zealand farmers will tell you that they never want to go back to a world with subsidies, in which they run their business to maximize government payments rather than maximizing profit earned in the marketplace.

Now, New Zealand farmers are cooperating on how to price on-farm greenhouse gas emissions beginning in 2025. It's certainly contentious, and many farmer groups object to this and other prospective regulations. Farmers drove their tractors to the city in protest last year. Yet the process is moving forward.

Out with Tobacco and in with Sweet Potato

Durian: The "King of Fruits" is Booming in China