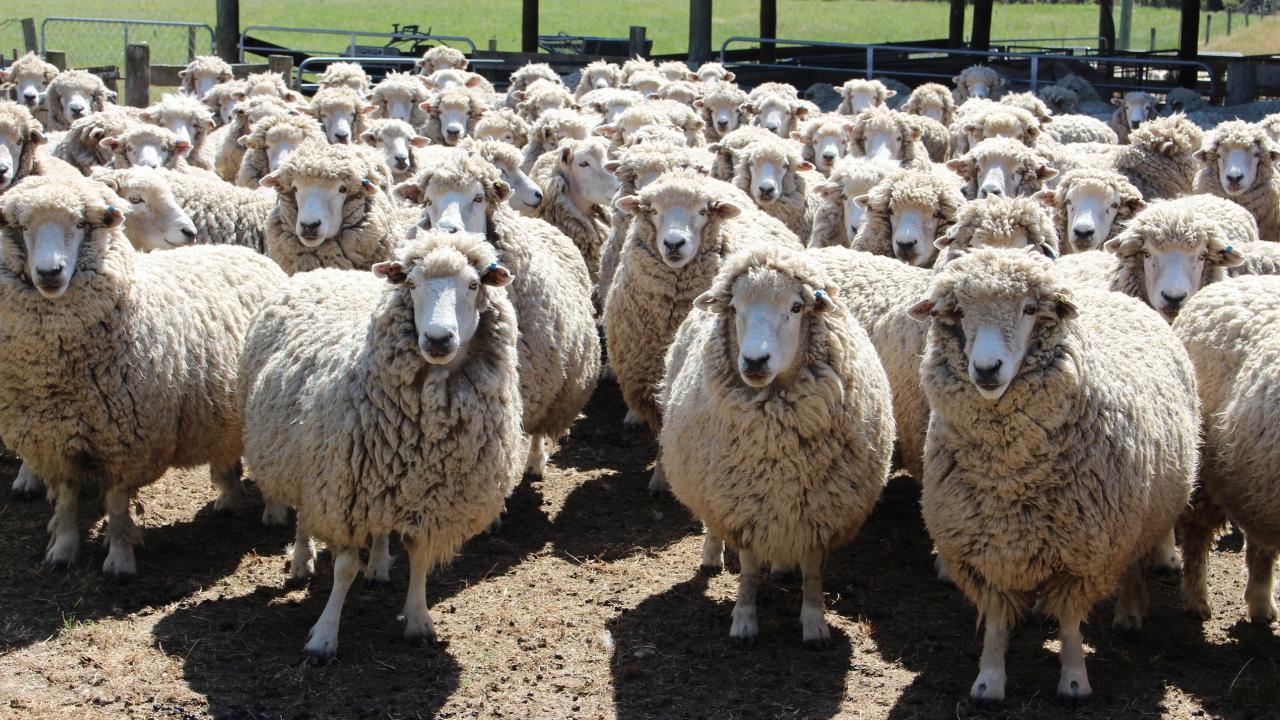 What does New Zealand make you think of?  The All Blacks rugby team, Lord of the Rings movies, Flight of the Conchords, Jacinda Ardern, Lorde?

There was a time when the answer to that question was sheep. In 1984, New Zealand had 70 million sheep and 3.2 million people. That's more than 20 sheep per person. The next year, the New Zealand government stopped its generous agricultural subsidy programs, leaving farmers to fend for themselves.

New Zealand agriculture changed markedly in the ensuing 35 years, moving away from sheep and towards dairy cattle. By 2018, there were just 27 million sheep, or 5.8 for every person. 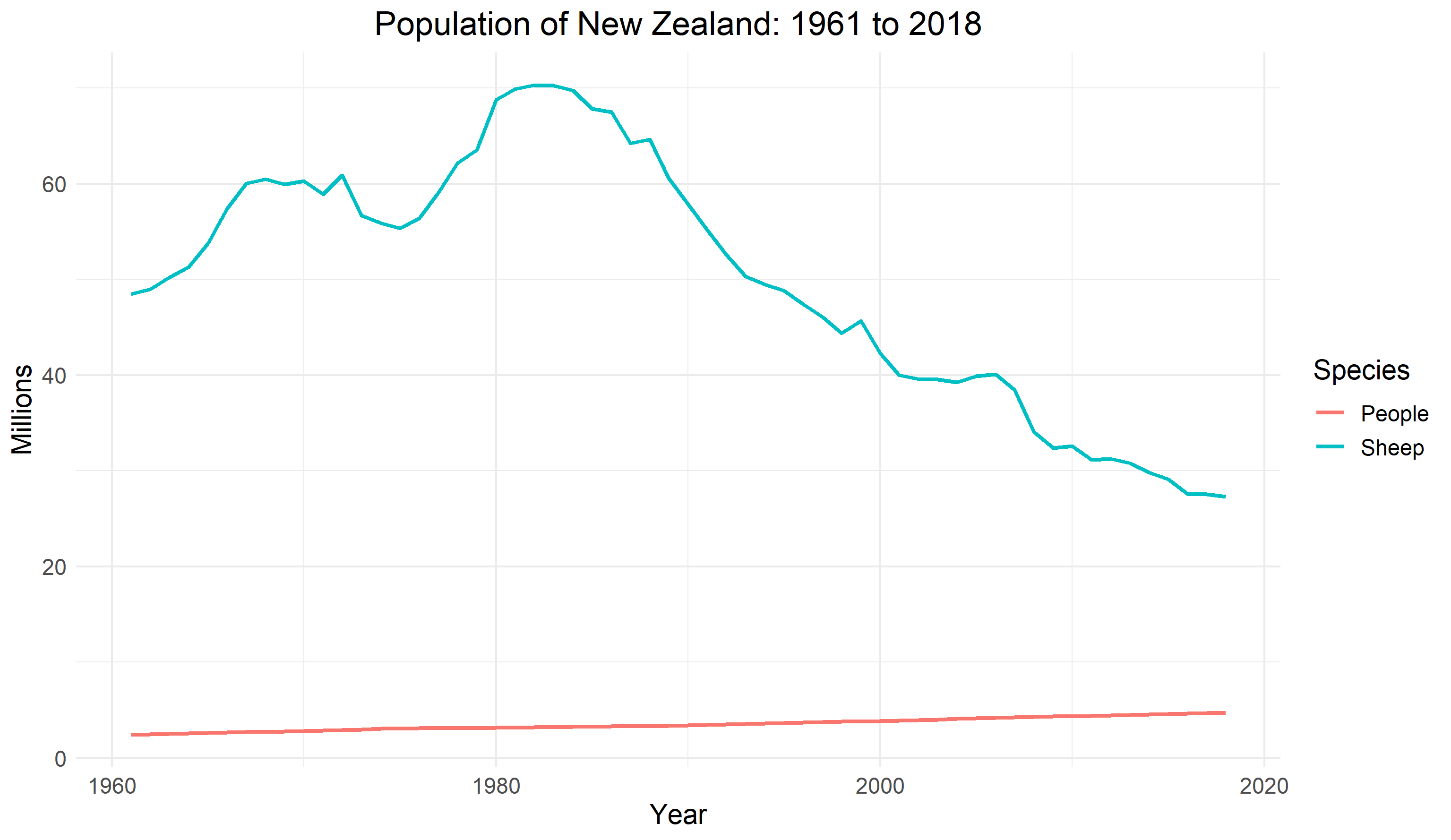 One reason the sheep population got so high is the New Zealand government offered generous support to sheep farmers through an array of income support, price stabilization, and other subsidy programs.  I found it difficult to find complete data for this period, in part because there is more than one way to do the accounting.  I rely here on a paper by Daniel-M. Gouin, Noella Jean, and John Fairweather from Lincoln University and a paper in the Western Journal of Agricultural Economics by my emeritus colleague Warren Johnston and Gerald Frengley.

In 1983-84, more than 30% of the revenue of pastoral farmers came from the government. Pastoral means livestock that feed on pasture, which basically means sheep and cattle. Most of this support went to sheep.

This level of support was unsustainable, For much of the 20th century, the New Zealand economy thrived on the back of its farmers, who supplied the United Kingdom with meat, wool, and dairy products. Hidden beneath this success was a highly regulated and inefficient economy. When export markets shrunk and macroeconomic stagflation arrived in the 1970s, the economy stalled. By 1984, New Zealand faced bankruptcy.

The Labour Party won the 1984 election and immediately set about deregulating the economy, beginning with removal of all agricultural support programs. This represented a dramatic political realignment as the traditionally left-of-center Labour Party embraced free market reforms. Since that time, government financial support for New Zealand farmers has remained low, in contrast to the United States.

Dairy production began increasing almost immediately after the reforms and now produces more value than sheep meat, wool, and beef put together.  The increase in dairy has come in large part from conversions of sheep farms to dairy (as I notice every time I visit my parents). Reduced demand for wool caused by the rise of synthetics means that the value of wool production has declined relatively more than sheep meat. 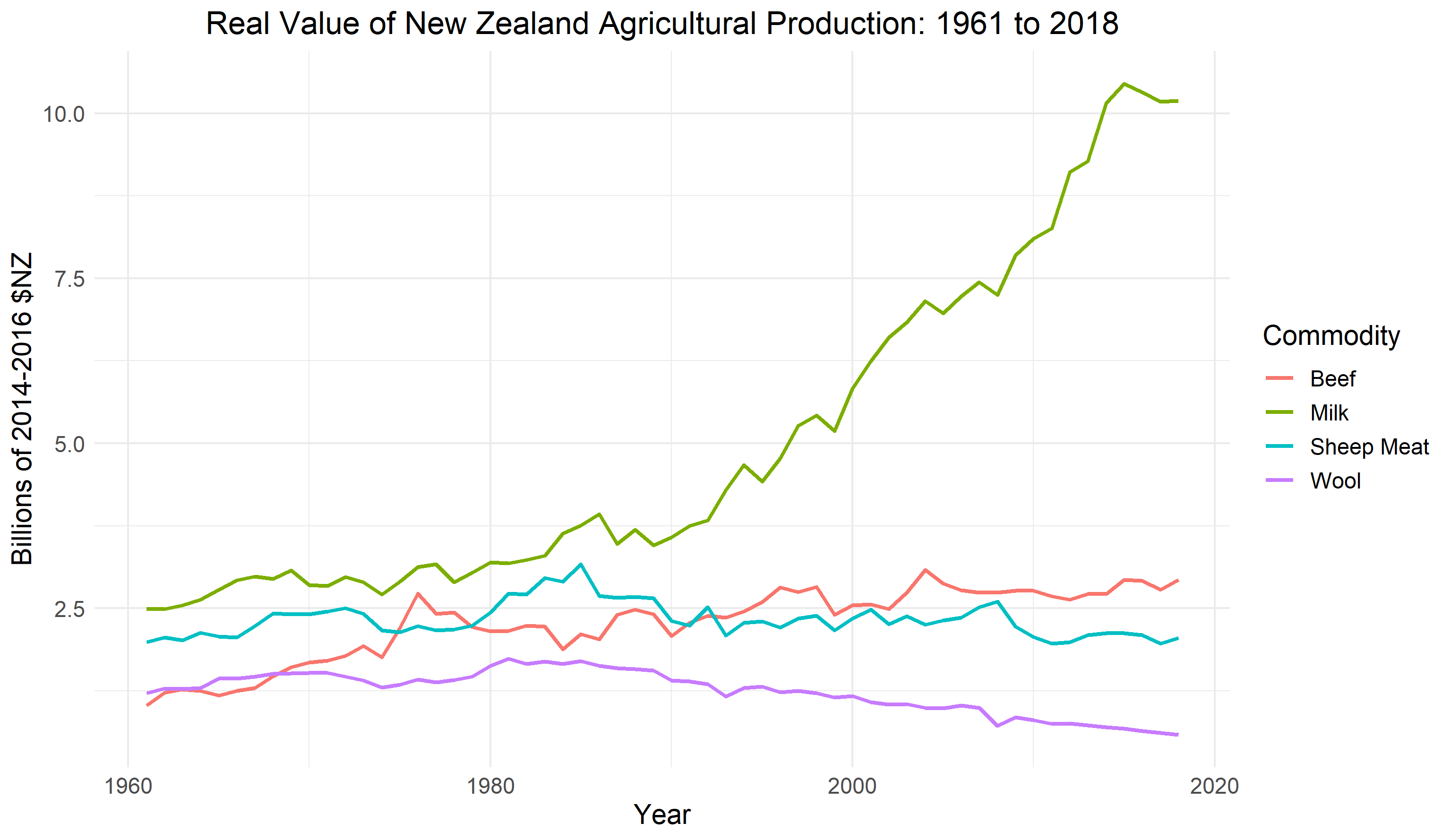 Dairy now comprises half of the value of agricultural production in New Zealand. Beef, sheep meat and wool make up another 25%.  So, 35 years after the end of subsidies, pastoral sheep and cattle still dominate New Zealand agriculture. There are fewer sheep farms now, but they are productive and competitive. 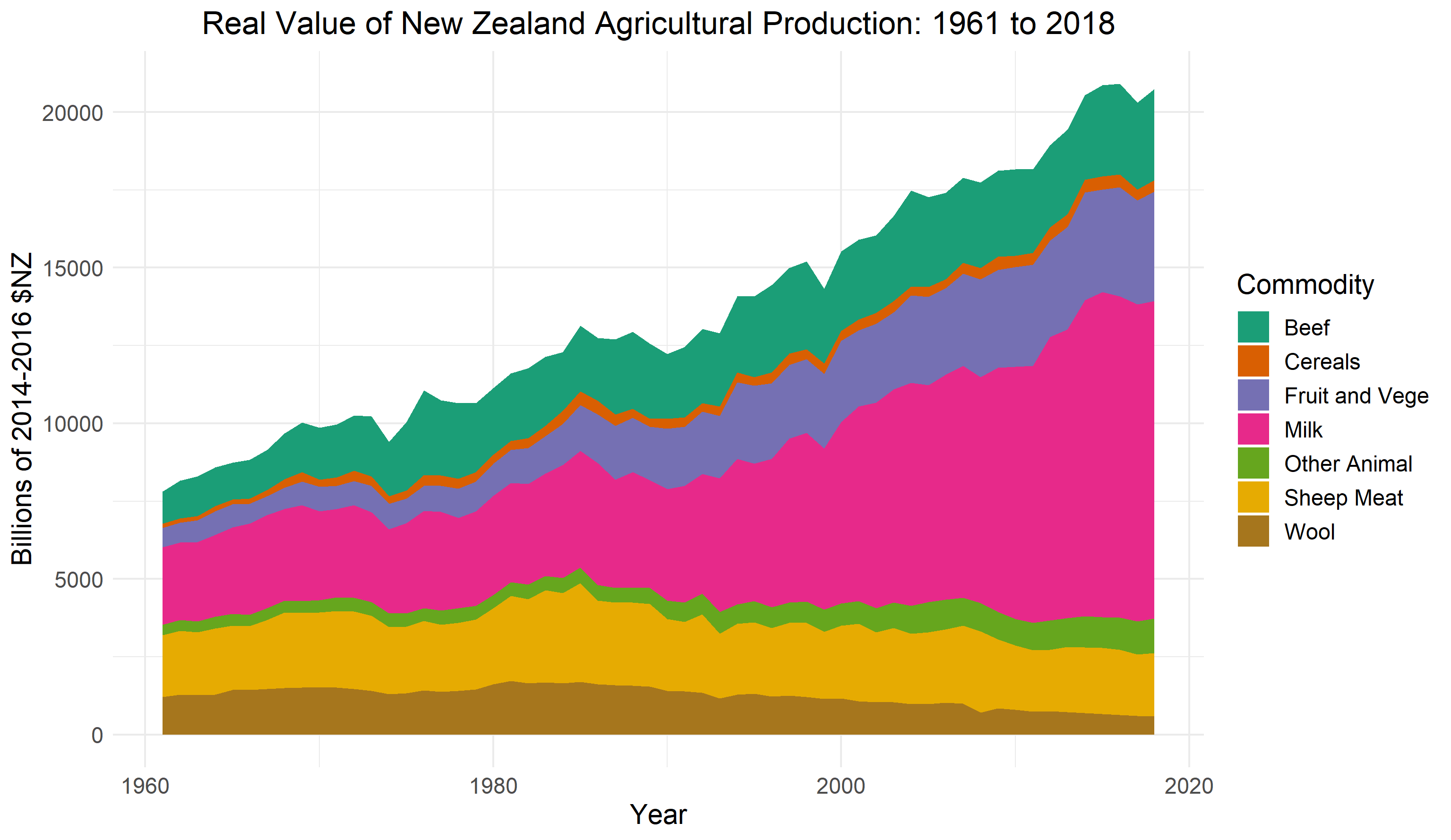 New Zealand farmers will tell you that they never want to back to a world with subsidies, in which they run their business to maximize government payments rather than maximizing profit earned in the marketplace. At least, I know one sheep farmer who says that.  My dad.

We do not yet have a data app for international farm support. I created the graphs in this article using R code that pulls data from spreadsheets posted on various websites.