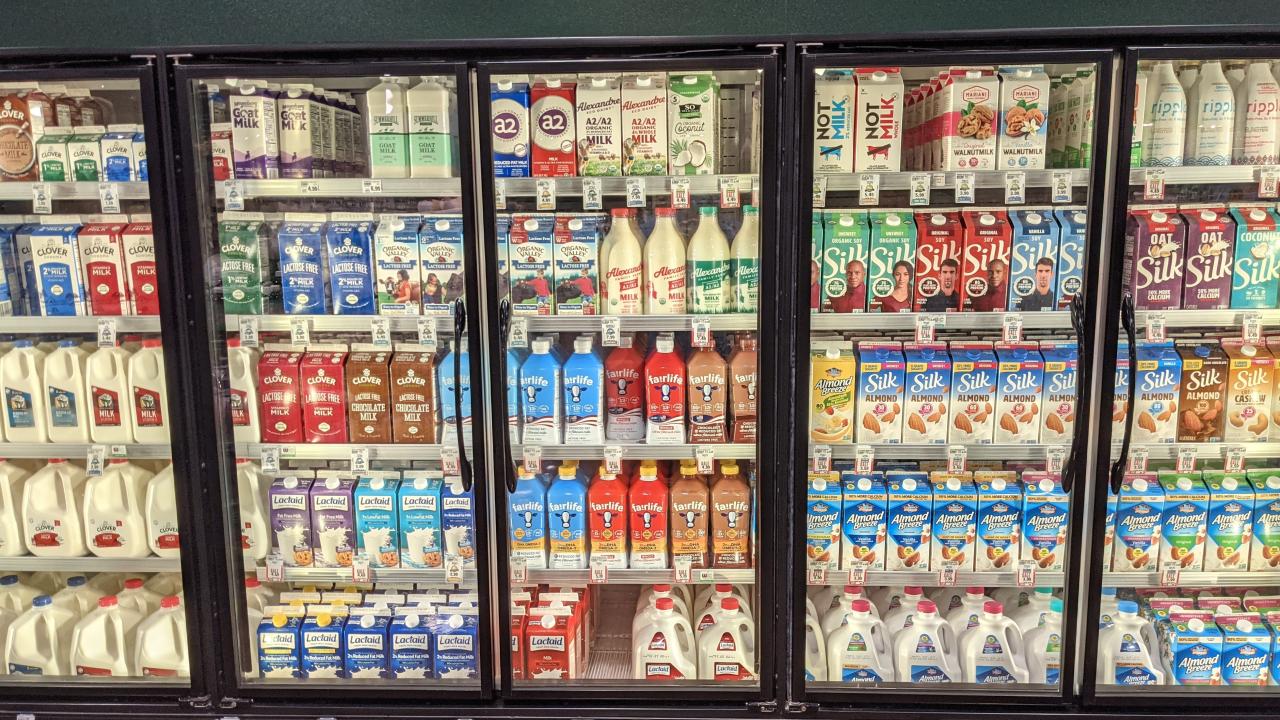 Which Milk Substitute is the Best?

It seems that every week someone figures out how to milk a new plant. To soy, almond, and coconut, we have added oat, cashew, pea, rice, hemp, banana, and numerous others as substitutes for milk from cows. And this week, the world celebrated Plant-Based Milk Day.

My daughter and I decided to figure out what the deal is with all (or at least some) of these products. We spent some bucks on five iced lattes from a local Starbucks, each one with a different milk or milk substitute. We rated them and, as in our chicken sandwich taste-off, did not agree.

In 2020, the Good Food Institute reported that plant-based products made up 15% of milk-like products sold in grocery stores. The plant-based share is lower for other dairy foods: 7% for butter, 3% for ice cream, and only 1% for cheese.

Fluid milk consumption in the US has declined by 45% in the last 45 years. The average American now consume 141 pounds per year, or about 3/4 of a cup per day.

The long-running decline in fluid milk consumption creates a misleading picture of dairy product consumption. Americans are consuming 20% more milk per person than they did 45 years ago. However, rather than drinking fluid milk, they are whipping it into butter, curdling it into cheese, or fermenting it into yogurt.

The largest growing dairy products since 1975 have been cheese and yogurt. American cheese, much of which is dyed orange for historical reasons, comprised more than half of all cheese until 1988. Since that time, other cheese varieties have grown much more popular.

So, dairy consumption is growing, even as plant-based products grab an increasing share of the fluid milk market.

But, which alternative tastes the best? Last week, my daughter and I drove to Starbucks and ordered five tall iced lattes, one each with almond, coconut, dairy (2%), oat, and soy milk. We did not add sweetener or syrups or anything else. We went with iced rather than hot drinks because it was 100° outside. We also ordered 2oz of each milk product on the side so we could taste it unencumbered.

The cup labels say Eric because one of the remaining vestiges of my New Zealand accent is that sometimes people hear my name as Eric.

We first tasted each drink blind and rated the taste out of 5.  Then, we tasted them again knowing which was which.

Here is one issue with our experiment: Neither of us would typically order a tall iced latte at Starbucks. If I were ordering an iced latte, I would add another shot or two of espresso; I like my coffee strong.  This means all of the drinks in our experiment tasted a little like dishwater to me. My daughter does not typically drink coffee.

All five milk replacements are whitish in color, although both oat and soy have a brownish tint. Coconut milk is very white. When mixed into a latte, the cow's milk produced a much lighter colored beverage than any of the substitutes.

Stripping out the coffee and tasting just the milk tells a somewhat different story. I liked dairy the best (perhaps because I was pretty sure I knew what I was drinking). I also liked the coconut, even though I did not appreciate it in my coffee.  Both of us liked almond milk much more when tasting it blind. My daughter gave dairy a low rating, especially with the blindfold off, perhaps because her stomach tends not to tolerate milk well.

One explanation for our preferences could be differing sugar content. The soy latte tasted really sweet. Its sugar content is the same as 2% milk and higher than any of the other products. Almond milk is the least sweet.  Using myfooddiary.com, I tabulated the sugar content of each latte and plotted it against our blind ratings.  We tended to like the sweeter drinks better, especially in the lattes. I typically drink coffee without sugar, but clearly appreciated it in this context.

One reason soy milk has been popular for so long is that it is similar in macro nutrients to 2% milk. Almond, coconut, and oat milk have markedly less protein than dairy and soy.

Another possibility is that we projected our on biases onto our ratings. To get at this possibility, we each guessed at what we were drinking while we were blinded.  My daughter was a much more aware taster than I was, at least when drinking the latte.  I correctly identified only the dairy one and got the others all mixed up.

One issue was that I was expecting oat milk to be the sweetest, whereas soy was the sweetest. Once I knew what I was drinking, the oat milk tasted like a bowl of oatmeal, but my brain didn't recognize that when I was thinking it was soy.

There are a wide variety of plant-based milk substitutes on the market, with widely varying nutrient content, as shown in this recent paper by Adam Drewnowski.  Starbucks uses oat milk by Oatly and their own almond, coconut, and soy products. This means there is wide variation in how closely these products substitute for milk from cows.

Food and our preferences for it are complicated.