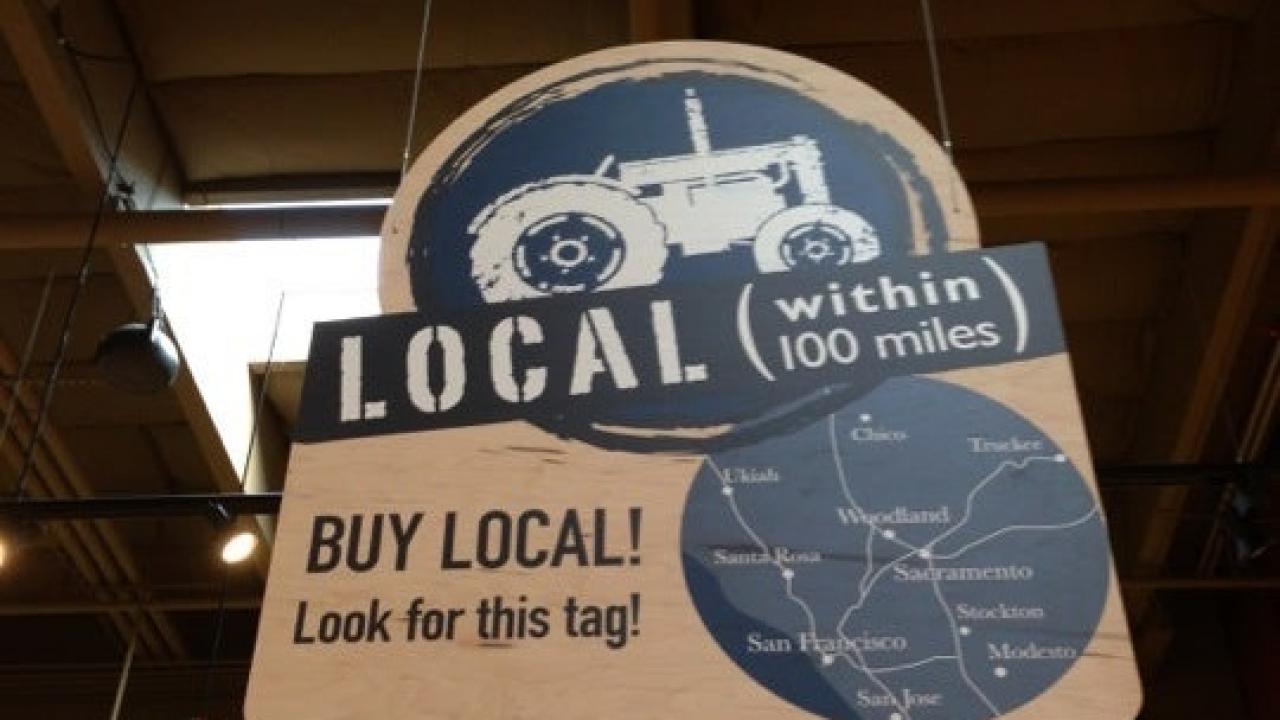 More of our Food is Coming from Big Farms Far Away

Many towns have farmers markets where people can buy food directly from a local farmer with a small farm. Many grocery stores, especially upmarket ones, sell products grown within a short distance of the store, ostensibly on a small farm. Yet, economic forces are pushing against local food. Over time, less of our food comes from small farms and more of it comes from far away.

Yesterday, I had the pleasure of participating in a great panel discussion with Freeman Barsotti of Farm Fresh to You and Lon Hatamiya of Hatamiya Group about the economics of local food.  Our discussion was part of the Food for Fairness Summit organized by Yolo Food Bank, and was expertly moderated by Erika Bjork.

Most food is produced in the same country in which it is consumed, but the percent of food that travels across borders is increasing.  In 1990, food trade totaled just over 20% of the value of production; it is now almost 40%. This trend is most evident in fruit and vegetables, especially in the last decade. The trade percentage for cereal grains such as corn and wheat has been relatively constant.

These trends are present throughout the world, but are most prominent for European countries, which have much higher imports as percent of their production. Asia is the continent with the lowest import percentage.

The United States now imports fruit and vegetables worth 80% of its domestic production, double the percentage in 2000. Part of this increase is due to NAFTA, which opened up imports from Mexico of products such as avocados. The US is a major cereal-grain exporter, so it imports very little of those commodities. Overall, US food imports are 40% of domestic production.

Is it bad that less of our food comes from small farms and more of it comes from far away?  To answer this question, we need to articulate why it matters. Too often, we romanticize the phantom local small farmer and push policies such as buy-local mandates without a clear idea about whether and for whom it would be better than the alternative, an alternative that produces a lot of low-price food.

Here are some potential arguments for local food.

A. Romance. Maybe you like the idea of knowing your spinach was cultivated lovingly by a person you know. If so, you should absolutely pay the higher price for that spinach. If not, or if you cannot afford the higher price, then you should not buy it. This argument does not justify buy-local mandates, which force local food on everyone. It does justify policies and technologies that enable small farmers reach their customers, e.g., smart labels in grocery stores, liberalizing farmers markets.

It's also easier to be romantic about local food when you live somewhere with great produce.

B. Environment. In principle, small farms could use resources more judiciously to reduce pollution and preserve soil health. Many small farms do exactly this, but so do many large farms. When governments impose regulations to improve environmental outcomes, the associated paperwork is typically less burdensome to large farmers who can employ someone to handle it. Policies that minimize compliance costs help small farmers.

D. Health. Locally grown spinach is healthier than french fries, unless you really need calories and don't have much money. See Argument A above.

E. Taste. I think fresh local tomatoes and strawberries taste better than the ones I can buy in the grocery store.  See Argument A above.

F. Resilience. Efficient global food systems tend to produce a lean supply chain for commoditized products. If you turn thousands of tons of tomatoes into tomato paste, then you can ship it around the world to be used in myriad products. As we are observing in the COVID-19 pandemic, lean supply chains can falter when stressed. Monoculture production is more susceptible to disease.

Small farms tend to exist outside global supply chains and cultivate their own marketing channels. They also produce a variety of products outside this mainstream, which encourages biodiversity. I'm not sure what policies this argument justifies, but a robust network of small farms provides a safety valve when global supply chains come under stress. I do think that artificial intelligence technologies can reduce the cost of incorporating variety and resilience into the food supply chain and thereby enable small farmers to compete. For example, food processing robots that can seamlessly handle variation in fruit size and variety, grocery store inventory management systems that can seamlessly source product from multiple suppliers, and robot weeders that can seamlessly transition between grapes and spinach.

G. Community. As our economy becomes more globalized, we tend to become more separated from our neighbors and the members of our community. It feels like we have lost something when the sense of local community fades. I don't know how to create a vibrant local community; this is outside my area of expertise. Nonetheless, I respect the entrepreneurial spirit and hard work of local small farmers and can see them as an important part of such a community.

H. Big is Bad. Large firms are often able to produce products more efficiently. Their size enables them to get the most out of expensive machinery, which lowers the cost to consumers. However, large firms can also wield power by paying lower prices to their suppliers, charging higher prices to their customers, and forcing both suppliers and customers to do things their way.

There are 80,000 farms in the US with more than $1 million in annual sales; there are 9000 farms with more than $5 million in sales.  These farms are large and getting larger, but there are a lot of them, so in general their market power is limited. However, the story is very different in food processing and retail. The largest four beef-packing firms have 82% of the market. The top four hog-processing firms have 66% of the market. Large retailers like Costco and Walmart can dictate terms to suppliers of produce. These facts suggest an important role for antitrust policy.

Our food preferences are embedded deeply in our identity, emotions, and culture in ways that our preferences over notepads or thumbtacks are not. That's why we have a local food movement, but not a local notepad movement. But, before enacting policies that aim to expand local foods, it's important to ask what about localness is valuable and whether proposed policies would create that value.