The Future(s) of Water Trading

As we know, California and much of the west is in extreme drought. Actually, according to the US Drought Monitor, much of the region is in "exceptional drought", which is worse than extreme. Raging wildfires are an unwelcome reminder of this.

Drought is a prolonged water shortage. A common refrain is that we have enough water but are using it inefficiently. Everything would be fine if only we would stop growing almonds or flooding rice fields or saving fish or watering lawns or taking long showers. It is obviously true that if some people used less water for the things they want to do, then others could use more. But, how much water already gets traded and how much is likely to get traded in the future?

The first question is who gets to decide how the water is used. The California Water Code contains the answer to this question and it's complicated, as evidenced by the fact that the code is thousands of pages. Basically, cities, farmers and regional water districts have rights to particular sources of water and they may sell their water to other users, but only if a higher authority doesn't curtail their allocation. For details, I recommend this report by Ellen Hanak and Elizabeth Stryjewski at PPIC and this paper by Nick Hagerty of Montana State.

Agriculture consumes more than four times as much water as urban users, so most water transfers are from agriculture to other agricultural users or to cities. In recent years, water sales have averaged 1.4 million acre feet per year, which is about 18% of urban use and 4% of agricultural use. An acre foot is just what is sounds like -- a foot of water on an acre of land (or 9.2 inches of water on an American football field).

The quantity of water traded has been relatively constant since 2000. It also shows little tendency to increase or decrease during droughts.  Some users will have higher demand for imported water during a drought, but the regions that tend to export water also have lower supply in those periods.

We do, however, expect the price of traded water to be higher during droughts due to scarcity. The Nasdaq-Veles water index (NQH2O) is a benchmark price for traded water in the state. It is aggregated from the five largest and most actively traded markets in California by WestWater Research.

The price is higher this summer than it was at any point in 2014 and 2015 during the previous drought.  This suggests that water is even more scarce this time.

Beginning in 2019, the Chicago Mercantile Exchange listed a futures contract based on the NQH2O index. This contract allows traders to bet on future values of the index. As of yesterday, the market was projecting that the price will exceed $1000 in 2022 and 2023. They are predicting that water will get more scarce in the next two years. 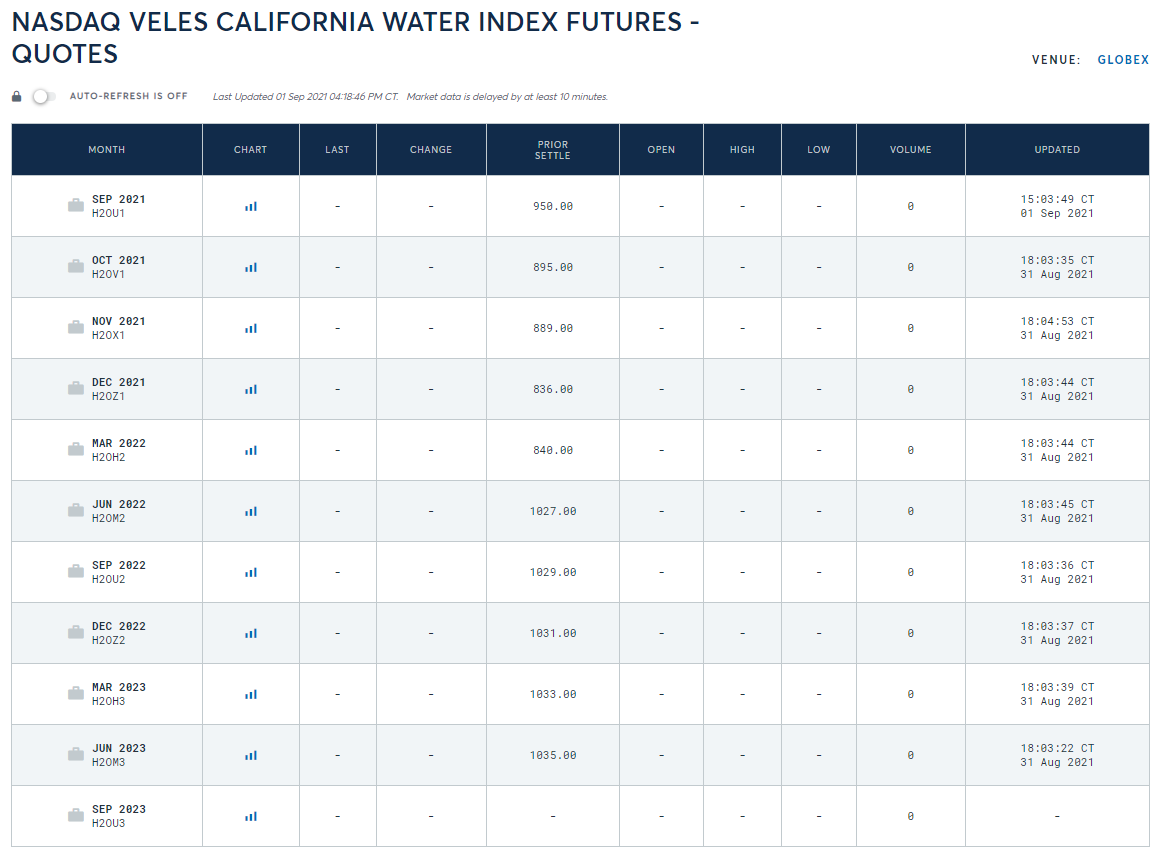 The NQH2O futures contract has seen little trading volume, so we should view the prices with caution. However, the coming regulation of groundwater and the prospect of an extended drought make scarce water a good bet. If prices do remain above $1000, we might expect increased interest from dry areas in purchasing water from regions where water has relatively low value.

The conventional wisdom is that Californians would be much better off if water trading were much more prevalent. It would cause water to flow to its most valued uses. However, water is expensive to move around. People are reluctant to sell it for many reasons, including regulatory, administrative and social constraints.

Nick Hagerty, in the paper I referenced above, built a model to estimate the potential gains from removing these constraints. He finds that water districts tend not to adjust their demand much when the price changes. This inelastic water demand implies relatively small gains from making water trade easier.

It is possible that water demand is more elastic in the long term as farmers and urban users adjust to changed conditions. This would imply larger gains from water transfers. The fledgling futures market conveys long term information about prospective market conditions that could encourage such adjustments.

Addendum: One region left out of the water trading discussion is Sonoma, Napa, and Mendocino counties, the state's premium wine growing area. This region is not connected to the state's vast water infrastructure, yet it is facing water shortages this year.