EPA to Revoke All Tolerances for Chlorpyrifos

This article was written by UC Davis ARE PhD student Isabelle Picciotto.  It is the sixth in a series of excellent articles written by students in my ARE 231 class this fall.

The EPA will revoke all tolerances for chlorpyrifos by early 2022. Chlorpyrifos is a pesticide that has been commonly used on a wide variety of crops since 1965, including fruit and nut trees, soybeans, wheat, alfalfa, corn, and brassica vegetables (broccoli, cauliflower, cabbage, etc.). In utero exposure to chlorpyrifos has been linked to neurological disorders in children such as reduced IQ, attention deficit disorders, and other neurodevelopmental anomalies. Many environmental protection agencies have been working for years to ban the use of chlorpyrifos due to the increasing evidence of its adverse effect on childhood development.

On April 29, 2021 the U.S. Court of Appeals for the Ninth Circuit ordered the EPA to issue a final rule on chlorpyrifos tolerances by August 20, 2021. Unable to conclude that chlorpyrifos exposure meets federal safety standards, the EPA will revoke all tolerances for commodities on February 28, 2022. California, Hawaii, New York, and Maryland have all previously passed restrictions or bans on the use of chlorpyrifos prior to the EPAs ruling in response to the known adverse health implications of exposure to the pesticide.

Chlorpyrifos is used across the U.S. on a wide variety of crops to control a number of target pests. It is used most intensively in California, Nebraska, and the northern plains, especially western Minnesota, Northern Iowa, and the eastern Dakotas.

Corn used more chlorpyrifos than any other crop until 2004. Soybeans, and orchards and grapes, are now the heaviest users. The increase in chlorpyrifos use in soybeans coincides with the invasion of soybean aphid in the early 2000’s. Chlorpyrifos is one of the primary pest management options to control infestations of soybean aphids. Chlorpyrifos has been used more heavily in recent years due to aphid resistance to pyrethroids, which is one of the other primary pest management options. The table below shows a full list of crops that use chlorpyrifos. 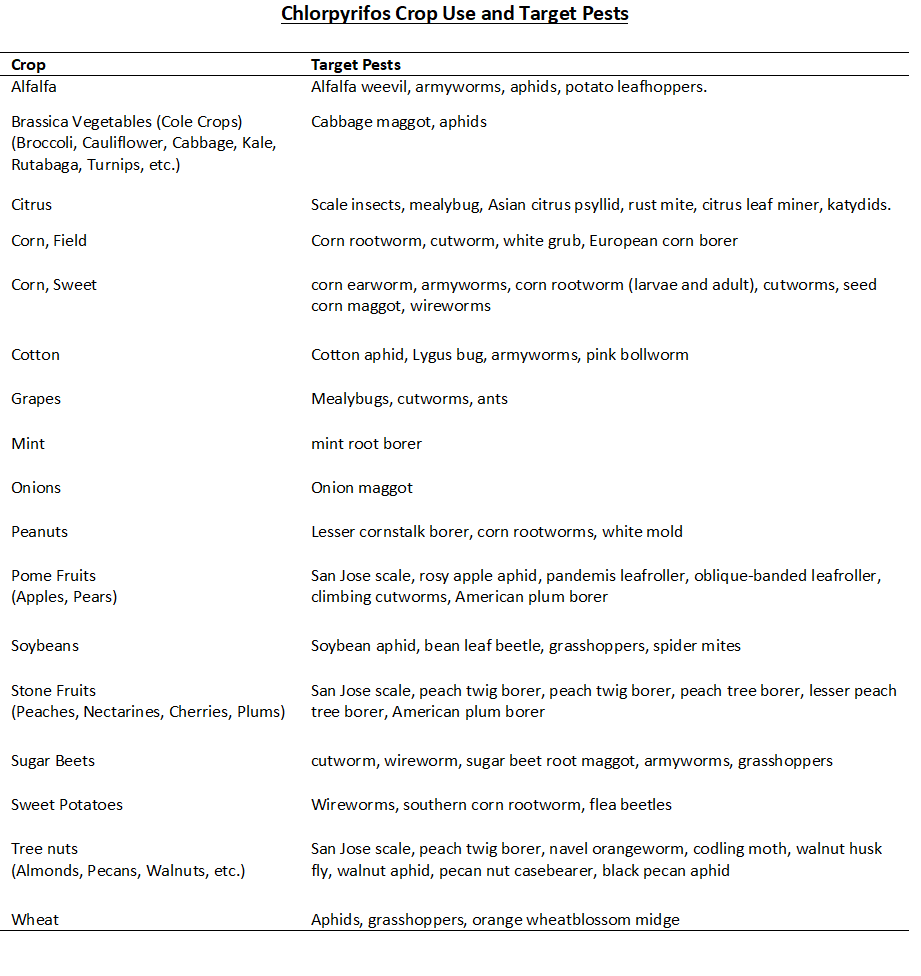 With the exception of soybeans, use of chlorpyrifos has been declining or remaining stable in most crops since the 1990’s. This trend is primarily due to the increased data and regulation surrounding use of the pesticide.

Since chlorpyrifos’ registration as a pesticide in 1965, the EPA has continually reviewed and revised policies governing the allowed use and application of the pesticide. In 1996, the Food Quality Protection Act (FQPA) increase safety standards surrounding the use of chlorpyrifos to protect children. In 2000, the registrants of chlorpyrifos agreed to eliminate, phase out, and modify certain uses of chlorpyrifos with the EPA. This consisted of eliminating homeowner uses, discontinuing use on tomatoes, and restricting use on apples and grapes.

The EPA revised chlorpyrifos regulations again in 2002 with respect to environmental protection and worker safety. In particular, the EPA regulation established buffer zones to protect water quality, fish, and wildlife, reduced application rates per season on a number of crops (including citrus and corn), and increased the required protective equipment for agricultural workers. Aerial pesticide application rates were reduced in 2012 and no-spray buffer zones around public spaces were created to protect children and bystanders from exposure. In 2015, the EPA planned to ban chlorpyrifos, but the decision was ultimately reversed in 2017.

In addition to a constantly changing regulatory environment, increases in genetically modified crops such as Bt corn and development of registered alternative pesticides have likely played a role in the reduction in use, particularly for corn crops in corn belt states. Crop rotation between corn and soybeans is common throughout the Midwest and serves as an effective pest management alternative to pesticide applications.

Only a subset of corn and soybean acres use chlorpyrifos, as is apparent from its relatively low use in corn belt states such as Illinois and Indiana. In contrast, it is used heavily through California’s central valley where a high percentage of the country’s orchards and grapes are located. Crops that use chlorpyrifos generate about $150 billion in production value each year.

California was the number one state for chlorpyrifos use prior to enacting strong restrictions beginning in 2015 when the California Department of Pesticide Regulation (DPR) designated chlorpyrifos as a “restricted material” and all application use was required to be permitted through the county agricultural commissioner.

In a California Department of Food and Agriculture report, Rachael Goodhue and co-authors estimated the economic impact of California's 2020 chlorpyrifos ban for six crops: alfalfa, almond, citrus, cotton, grape, and walnut. These crops accounted for 86% of California’s total chlorpyrifos use in 2017 and a substantial portion of California’s production value in the same year.

There are two main channels through which the ban on chlorpyrifos will affect agricultural supply: (1) the change in the cost of pest management by farms and (2) the change in crop yield and quality by switching to available alternatives.

The report estimates that for five out of the six main crops there will be no significant yield changes. For cotton, there is currently no good alternative for chlorpyrifos to control aphids and whiteflies, which results in reduced quality. The report estimates 25% yield losses for Pima cotton and 15% for upland cotton in California.

For all six major crops it is estimated that annual pest management cost would increase by $10.9 million to $12.5 million in total, primarily due to switching to alternatives. In 2019, the total value of production in California for all six major crops was approximately $42.5 billion. By crop, production value for almonds was $15.1 billion, grapes were $13.8 billion, citrus was $7.6 billion, walnuts were $3 billion, alfalfa was $2 billion, and cotton was just under $1 billion.

You can generate the two bar charts in this article using this R code.