Durian: The "King of Fruits" is Booming in China

This article was written by UC Davis ARE PhD students Huizhi Yang and Jiawei Guo.  It is the first of six excellent articles written by students in my ARE 231 class this fall.

Durian is known as the “king of fruits”. It is the size of a watermelon and is distinctive for its strong smell and prickly skin. Some people find durian has a pleasant sweetness, but others find the odor to be overbearing and unpleasant. In Southeast Asia, some hotels and public transportation services have banned the fruit due to its strong and persistent odor.

However, durian is incredibly popular for those who enjoy it. The custard-like pulp can be consumed at different ripeness stages and used in various savory and sweet dishes. The seeds are also edible if roasted.

Durian consumption has been high for decades in many parts of Asia. It has long been a familiar fruit in China, but it has become very popular there in recent years.

Demand for all fruit has been increasing faster than domestic supply in China. In 2021, China had a fruit trade deficit of $7 billion, an increase of 160 percent year-on-year. In the past five years, the fruit export volume in China has been stable, while the import volume has been increasing significantly. In 2017, China had a trade surplus in fruit, but since 2018, the trade deficit began to appear, and the deficit has been growing.

The top three fruits imported into China’s are durian, cherry, and banana, accounting for 29%, 14%, and 7% of value, respectively, in 2021. However, durian has not always dominated the Chinese imported fruit market. In the past few years, the rankings of imported fruits have changed significantly. Before 2019, the import value of cherries ranked first. But in recent years, fresh durian has become increasingly popular among Chinese consumers and has firmly occupied the first place since 2019.

China’s import volume of durian almost quadrupled between 2017 and 2021. From 2017 to 2019, the import price of durian was around $2.50 per kilogram, but the price has risen significantly since 2020. In 2021, it reached $5.10 per kilogram. This crazy price increase may partially reflect higher trade costs due to the epidemic, but the fact that both prices and quantities have increased implies that consumer demand is driving the increase in imports.

Rising prices have not dampened Chinese consumers' enthusiasm for durian. In 2021, China's import value and import volume of fresh durians reached $4.2 billion and 822,000 tons, respectively, an increase of 82.6% and 42.7% year-on-year. 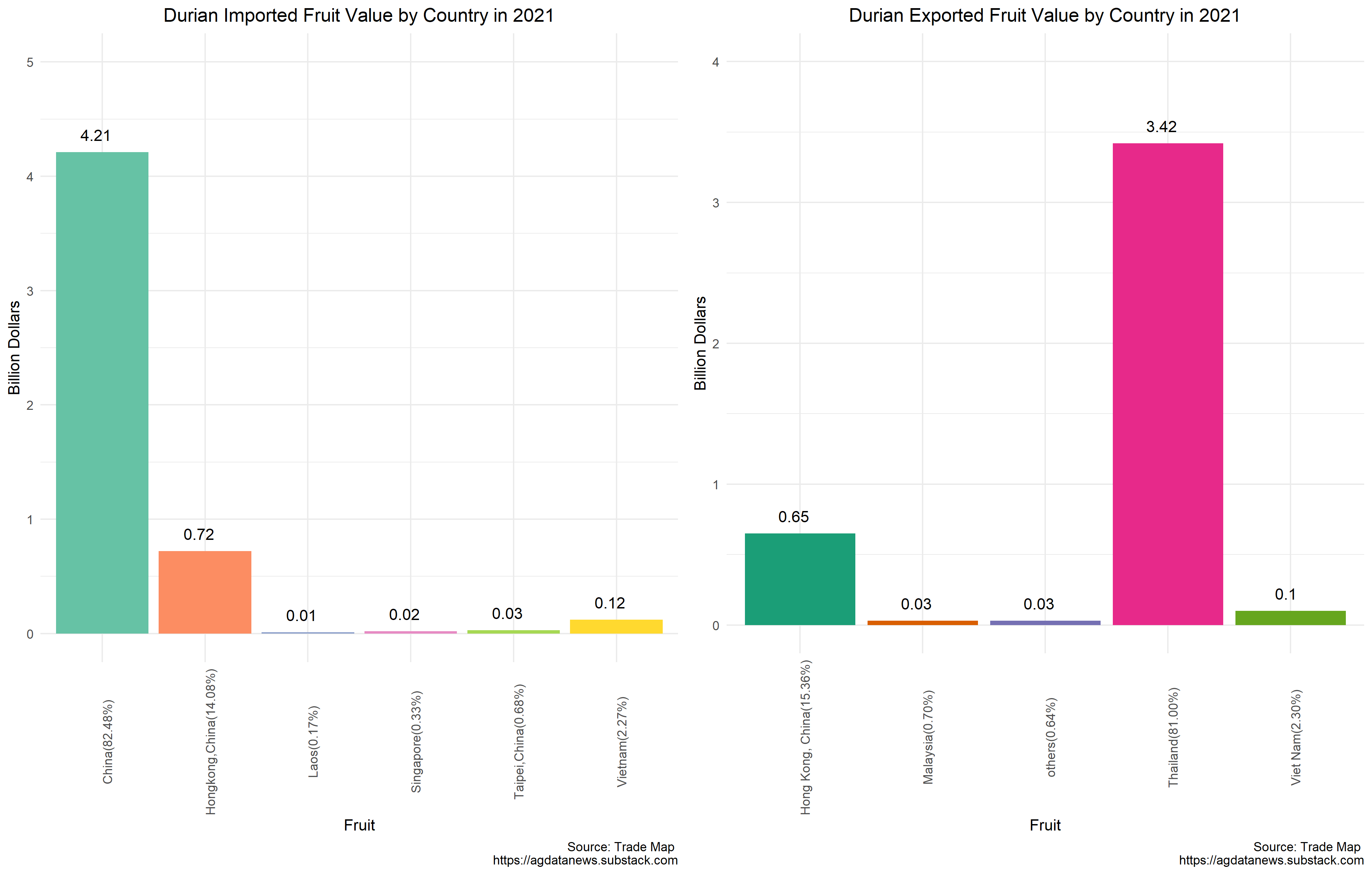 Since Jan 1st, 2022, the Regional Comprehensive Economic Partnership (RCEP) trade agreement has taken effect for most of the 15 member countries. This is the world’s largest free trade agreement and has made it easier for these Southeast Asian countries to export fresh durians to China. The trade of durian led to the economic development of related countries.

But, at the same time, the economic stability of the free trade zone faces challenges. In response to China's growing demand for durian, producers scramble to boost production and exports. The expansion of durian production is potentially damaging to the environment. China, meanwhile, is attempting to boost local durian production. With the durian trade so dependent on China, a significant increase in domestic production could affect the economic stability of exporting countries.

We made the graphs using this R code.