How Much Did Iowa's Massive Windstorm Affect Crops?

The storm was a derecho, which is the name given by Gustavus Hinrichs in 1888 to a "violently progressing mass of cold air, moving destructively onward in slightly diverging straight lines". Derecho is Spanish for direct or straight, in contrast to tornado, which is a hybrid of the Spanish words tornar (to turn) and tronada (thunderstorm), allegedly.

Initial media reports estimated that the storm damaged 14 million acres of Iowa cropland. Satellite imagery suggests that the winds damaged about 6 million acres of corn and soybeans (circled below), which is about a quarter of Iowa acreage and 3.6% of projected national acreage.

So, how much corn and soybeans were lost and how much were prices affected?  Event studies of this type have been a frequent topic of my research, including the effects on corn markets of an unapproved genetically-modified variety, ethanol policy, reduced pollution, and rail congestion.

At current prices, these effects correspond to a loss in value between $775m and $1.4b. Because most of these crops were insured through the federal crop insurance program, this loss will be shared by taxpayers and insurance companies.

As with the California wildfires, the destruction of capital and the traumatic effects on people's lives are likely much larger than the effects on crops.

The graph below shows corn futures price for delivery in December; the two red lines denote 6am and 10pm on the day of the derecho. The price increased by 1.4% during this interval. Let's assume that the initial assessment of corn traders was that the derecho reduced supply by enough to raise the price 1.4%. 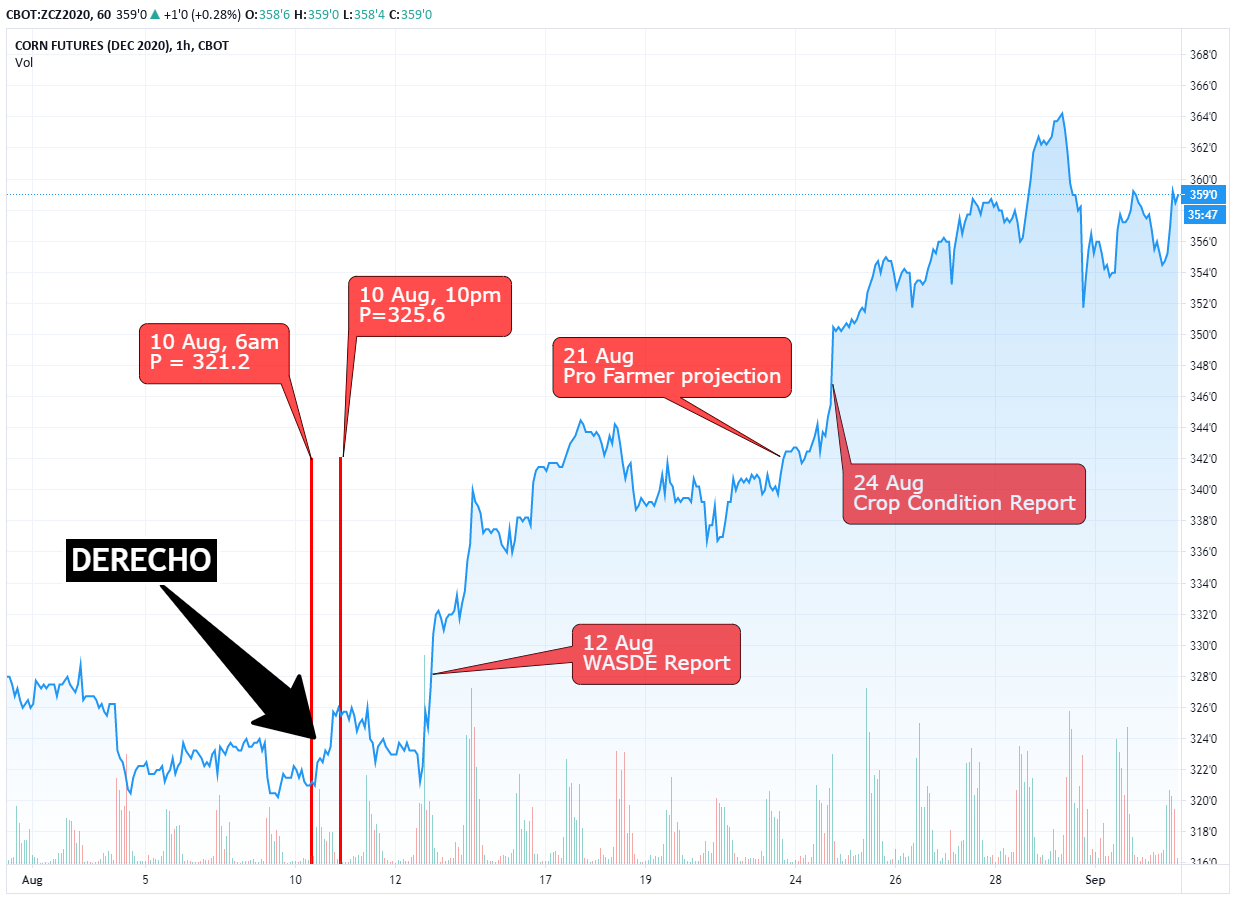 Announcements in the ensuing weeks have also caused price increases prices, including the USDA's WASDE projections, Pro Farmer's projections, USDA's crop conditions report, and relatively hot and dry weather. How much of these increases reflect the derecho?

Herein lies the challenge of event studies such as this. If we define a short window  over which the event affects prices, then we have little risk of confounding the event with something else, but we may not allow enough time for its full effects to be incorporated. Make the window too wide and you confound other events with the event of interest.

In a paper I published in 2012 with Mike Adjemian, we estimated how much corn and soybean futures change when the USDA changes its production estimates We found that a 1% decline in expected corn production raises prices by 1.35% on average. The price response is larger when the markets are tight such as when inventories are low or during the ethanol boom.

The Pro Farmer crop tour survey, which occurred after the Derecho, estimated that Iowa corn yields would be 10.9% lower than what USDA projected using pre-derecho data. In other states, Pro Farmer projects 1% lower yield, so it seems reasonable to conclude that the derecho could have reduce Iowa corn production by as much as 10%, or about 280 million bushels.

Putting these numbers together, the derecho appears to have reduced Iowa corn production by 5-10% with a corresponding price impact of 1.4-2.8%. At the current price of $3.58, this corresponds to a loss of between $500m and $1b.

For soybeans, the story is similar. Post-harvest futures increased by 1% on the day of the derecho. My research with Mike Adjemian finds that a 1% decline in expected soybean production raises prices by 1% on average.

Iowa produces about 13% of US soybeans, so a national 1% reduction implies 7.7% lower production in Iowa, equivalent to the loss of about 750,000 acres or about 44 million bushels. Pro Farmer's soybean post-derecho yield projections came in about 5% below USDA's pre-derecho estimates, or about 29 million bushels. 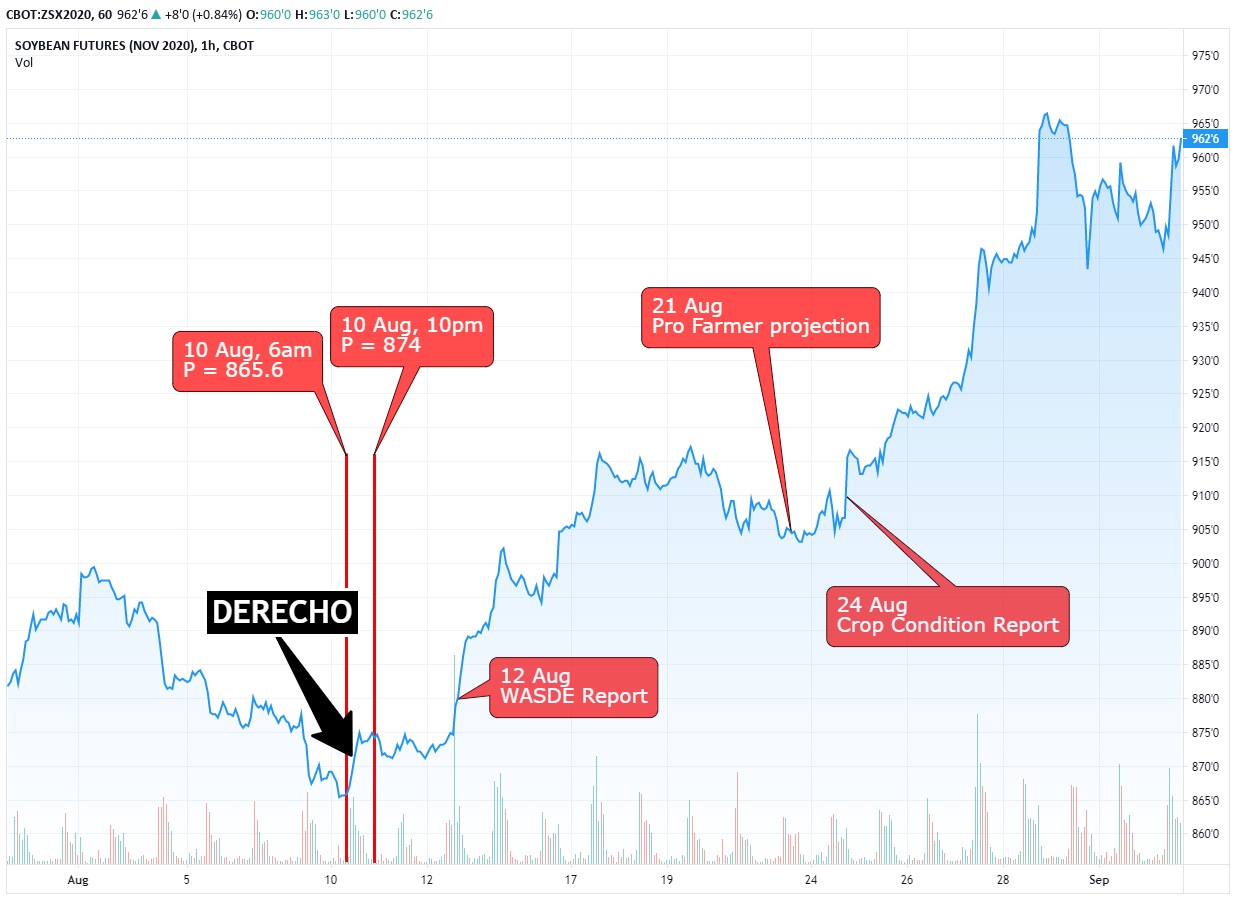 Update 10/2/20:  Annotations on futures price graphs created using the tools under charts on the CME website, e.g., for soybeans, click this link, look for the Nov 2020 contract quotes, and click the little bar graph circled below. 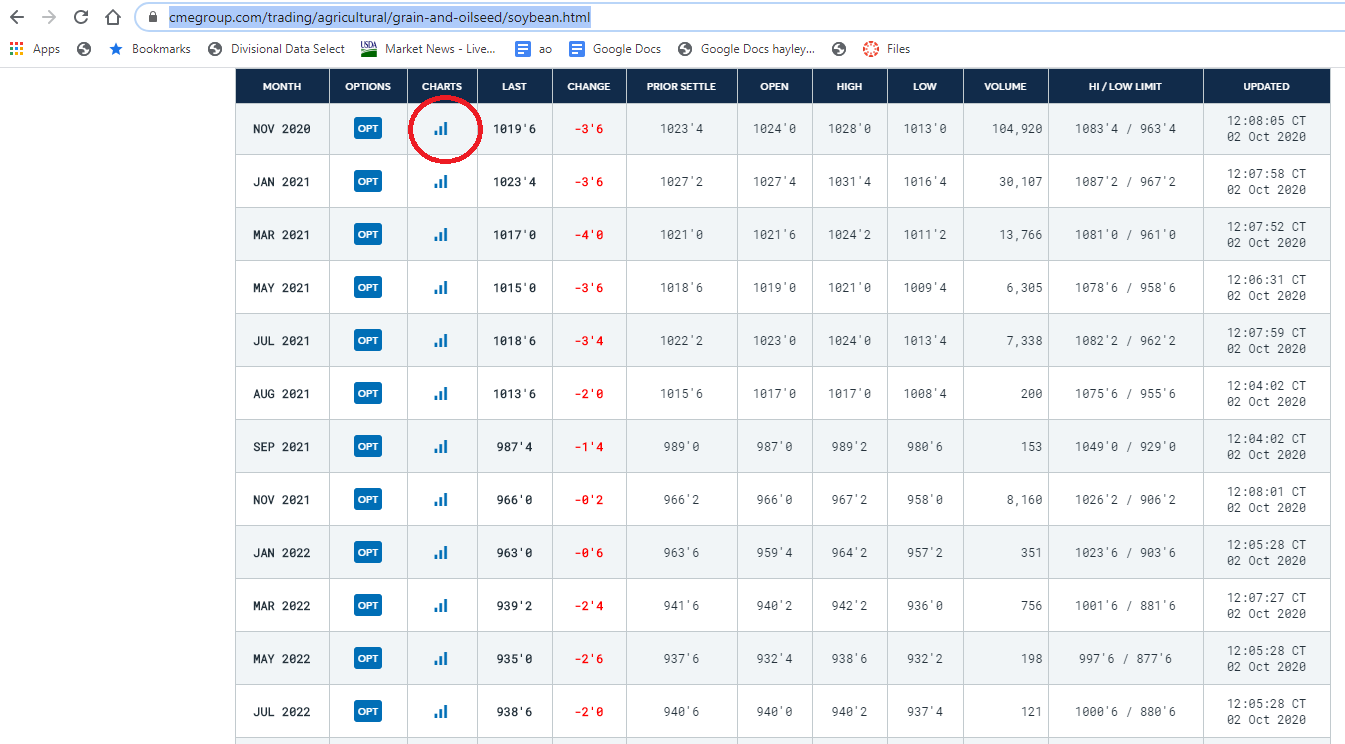