This weekend, you will undoubtedly read multiple incorrect articles whining about the change to daylight saving time.  It's possible you'll also read some correct opinions, like this one from Josh Barro. Here's why the whiners are wrong.

Human beings have devised a system of time in which noon occurs around the middle of the day. The sun rises no later than 8am and sets after 5pm, which allows a standard 9-5 work day during daylight hours. It's the same reason we have time zones. Changing our clocks twice a year ensures that most people don't travel to work or school in the dark, and it maximizes the amount of light after 5pm for recreation. 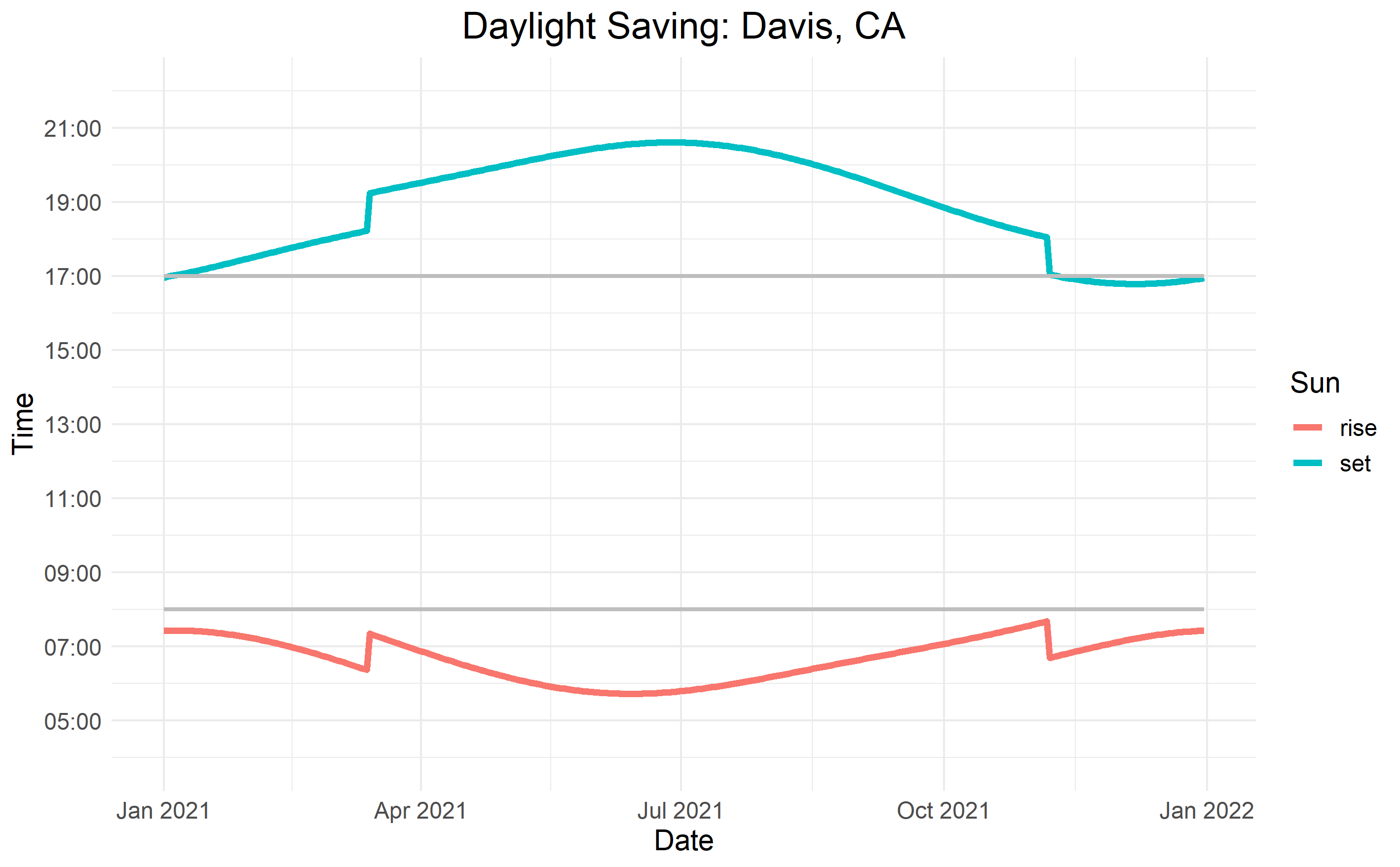 Daylight saving time was invented in 1895 by a New Zealander named George Hudson. I swear that is not the reason I like it. I didn't even know about him until I googled the origin of daylight saving for this article. Hudson was an entomologist who proposed two-hour time shift to give him more time to hunt bugs after work in the summer. I don't hunt bugs, but I do like long summer evenings.

Some have proposed to impose daylight saving time year round. This proposal focuses on the benefits of evening light and forgets the morning darkness. In Davis, it would push the sunrise after 8am in winter. Why would we make winter more depressing? 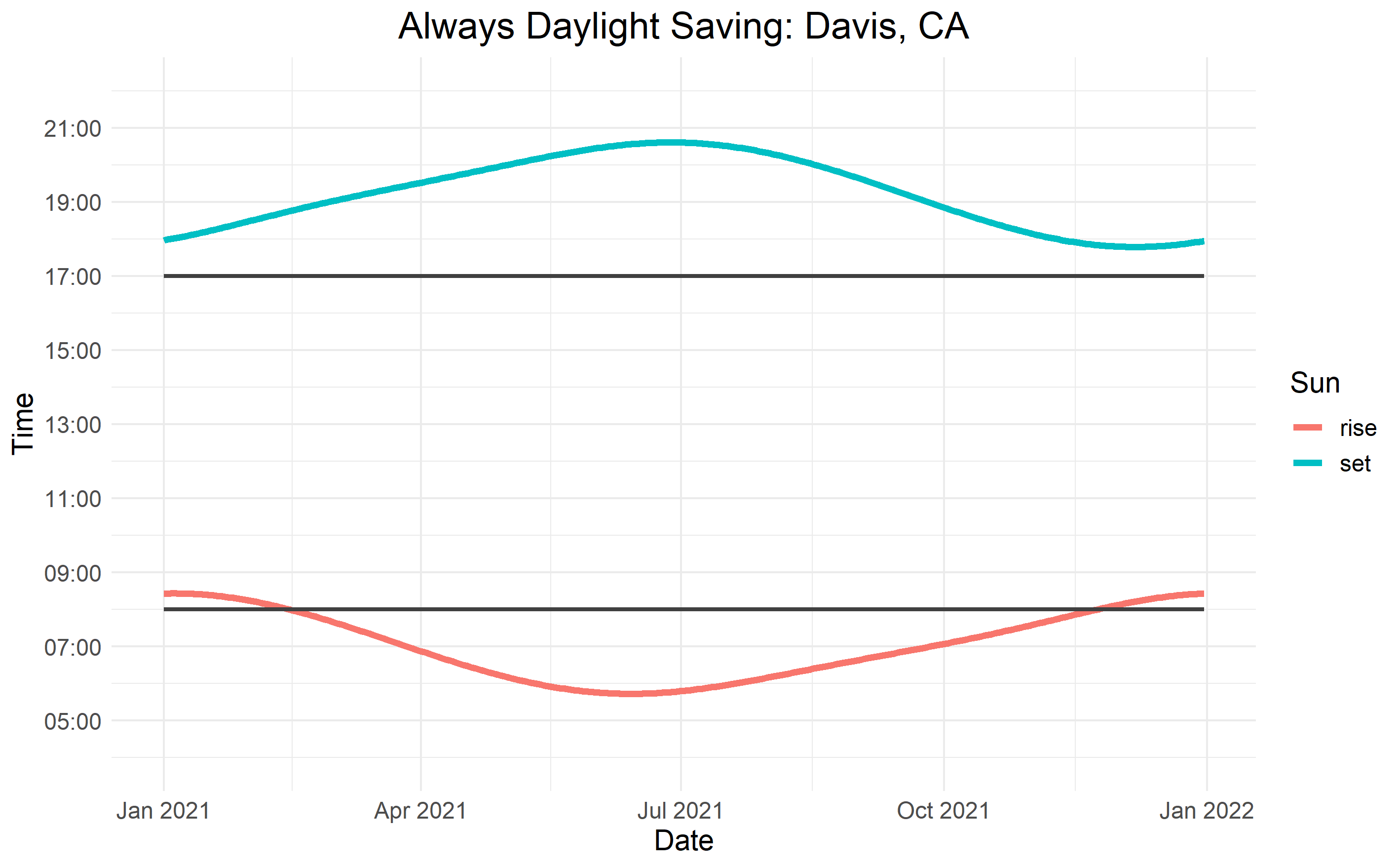 The benefits of changing the clocks are smallest close to the equator where the number of daylight hours varies less across the year. If we didn't change the clocks, sunrise in Miami would be 1.5 hours later in winter in summer, compared to 3 hours in New York, 4 hours in Seattle, and 7 hours in Anchorage. The swing in Anchorage is so large that it's impossible to keep the winter sunrise before 8am without making sunset unreasonably early.

In Anchorage, daylight saving hardly seems worth it, and it has relatively small benefits in Miami, but the cities between those latitudes are better off changing their clocks twice a year. 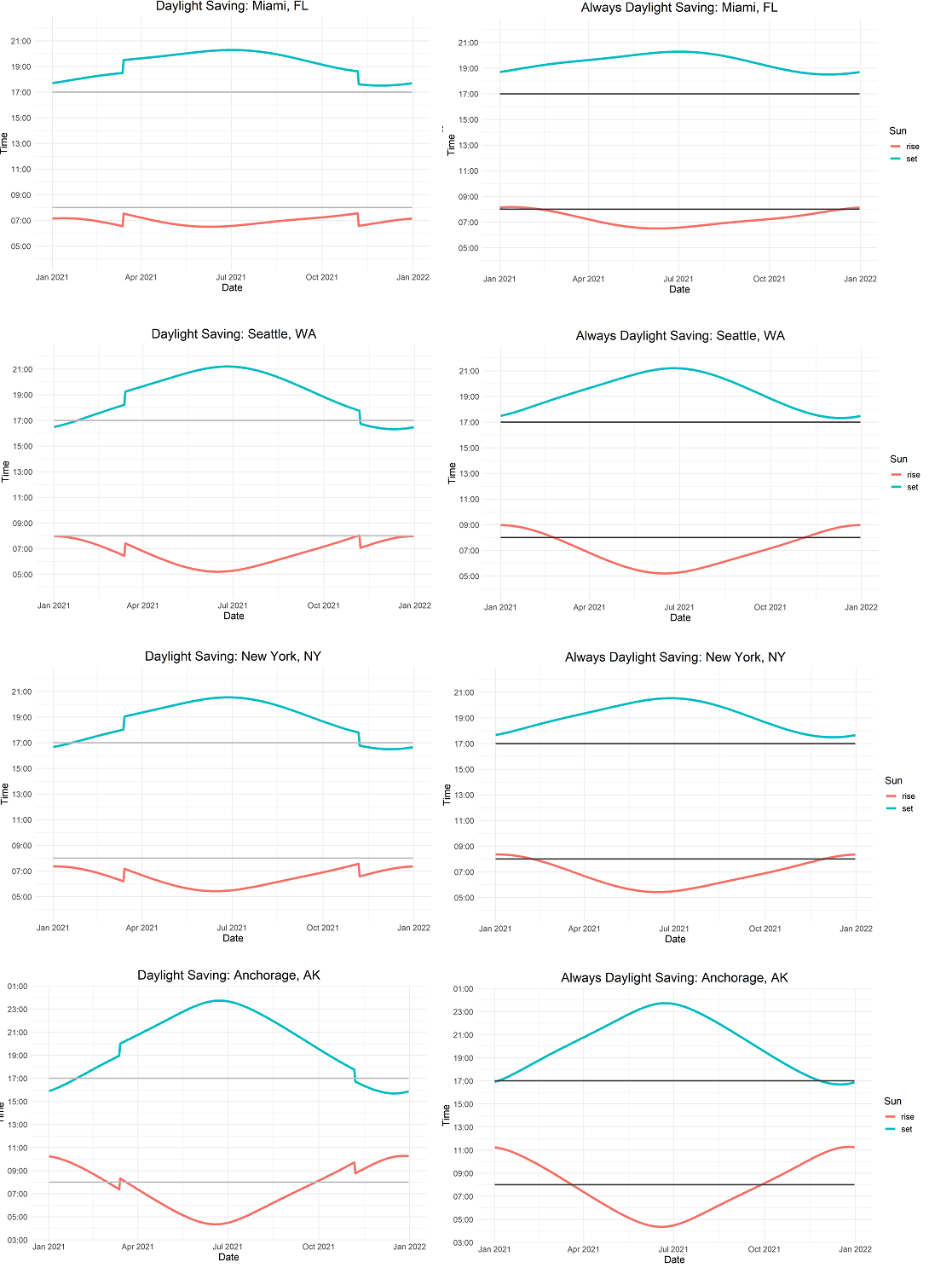 The transition into and out of daylight saving is disruptive in negative and positive ways. In the week after we spring forward, traffic fatalities and heart attacks rise due to sleep deprivation, but robberies decrease due to more evening light.  However, the transition lasts less than a week, and the benefits last all year long.

Daylight saving was introduced in many countries, including the United States, to save energy. If there were more light and a more moderate temperature when people were awake, then the theory was that people would use less energy.  In reality, changing the clocks does not appear to save energy.

Farmers typically do not like daylight saving, as their schedule is guided more by the sun than the clock, especially those who work with livestock. It is a myth that we have daylight saving for the benefit of farmers, so if you want to complain about it, don't blame farmers.

The real benefits of changing our clocks twice a year are long summer evenings and winter mornings that aren't too dark.  Enjoy the benefits of daylight saving time, and drive safely next week.

I made the figures in this article using this R code.