California wine grape production recovered somewhat in 2021 after a miserable 2020, but was still lower than any other year since 2008. The most produced varieties in 2021 were Chardonnay and Cabernet Sauvignon, each with about 600,000 tons of grapes, or about 400 million bottles of wine. The next three were Zinfandel, Pinot Noir, and French Colombard.

In this week's Ag Data News, I investigate California wine trends using a new data app we created to display California wine production and acreage data previously buried in spreadsheets on USDA's website. To access it, open a web browser and click this link. You can download the data with one click.

Crush prices for the high-end red-wine varieties (Cabernet Sauvignon and Pinot Noir) dropped by more in 2020 than did prices for white-wine and lower-end varieties. Their prices rebounded in 2021, but remain below 2019 levels. The low prices suggest that low production in 2021 is driven by low demand and a lingering over-supply from previous years.

If anyone orders merlot, I’m leaving. I am not drinking any (expletive) merlot --- Miles Raymond in the movie Sideways

The high price of Pinot Noir between 1997 and 2008 stands out in the above price graph. Many in the wine industry attribute the growing popularity of Pinot Noir, and the concurrent declining popularity of Merlot, to the 2004 movie Sideways. Pinot Noir prices did jump after the movie came out, but had also been high for several years prior to the movie.  Merlot prices were in the middle of a decade-long price decline when the movie came out.

Pinot Noir production certainly has grown in the past two decades. In a 2021 Journal of Wine Economics paper, my colleague Travis Lybbert and students in his Masters class tested whether Sideways contributed to this growth. This paper stemmed from their annual class case study sponsored by the Wonderful Company.

They found "that growers expanded acreage of Pinot and decreased acreage of Merlot in the years following the release of the film." Notably, the expansion was most pronounced in Central Valley districts such as Fresno, rather than Santa Barbara where the movie was set. They conjecture that increased production of lower-quality Central Valley wine grapes, and strategically blended them for sale under higher-priced coastal labels.

The California wine industry is divided into 17 pricing districts. The borders of most districts correspond to county borders, but some counties straddle districts. We label most districts by the largest county in the district or with a geographic descriptor such as "North" for District 9. Sideways was set in District 8. 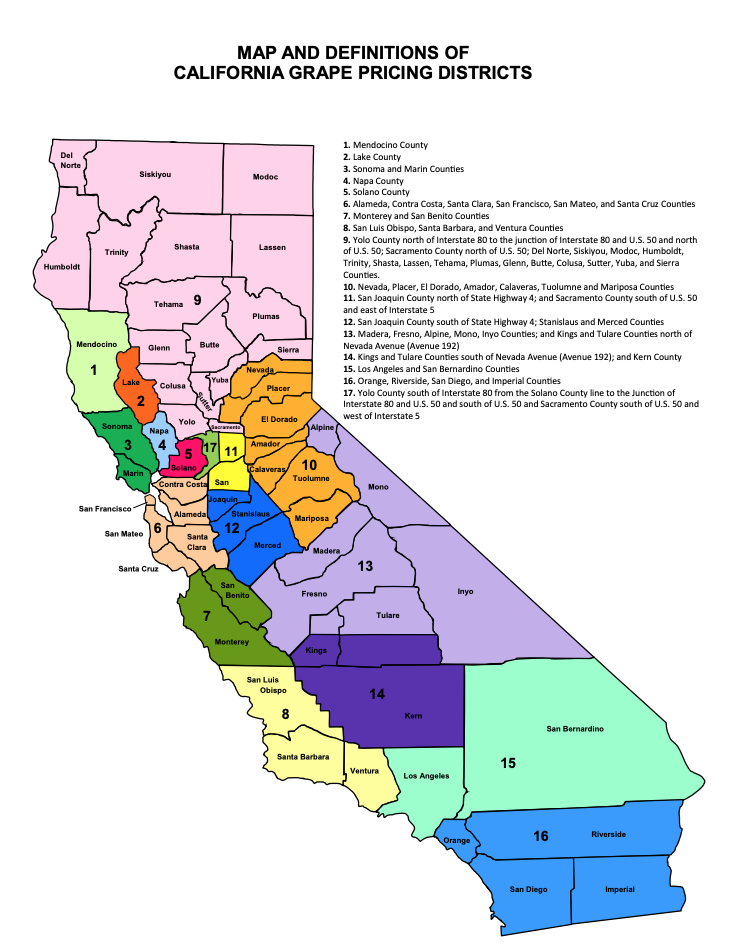 The Fresno and Sacramento districts are the largest wine-grape producers, followed by Monterey, Santa Barbara, and Stanislaus. California's most famous district, Napa, ranks ninth in production by volume.

After growing substantially in the late 1990s, California wine grape acreage has been relatively constant for the past 20 years.  Like all of California agriculture, wine grape growers will face tightening water restrictions in the coming years due to ongoing drought and the Sustainable Groundwater Management Act (SGMA), which requires local water authorities to take actions to achieve groundwater sustainability.

SGMA will limit the ability of farmers to increase groundwater pumping during drought and is projected to reduce irrigated crop acreage in the state by 2040. Statewide, the biggest acreage losers will likely be low-value crops such as alfalfa, rice, wheat, and cotton, but all crops will feel the squeeze.  Wine grape growers will particularly affected in premium districts like Napa and Sonoma, which grow few crops other than wine grapes.

You can re-create all of the figures in this article using our CA Wine Grapes data app. All you need to access it is a web browser. Download the data with one click. Huge kudos to ARE PhD student Yuhan Wang for her work creating this app.