Could We Pay Corn Farmers to Sequester Carbon?

This article was written by UC Davis ARE PhD student Andrew Swanson.  It is the eighth and final entry in a series of excellent articles written by students in my ARE 231 class this fall.

Yes, California’s Low Carbon Fuel Standard (LCFS) could convince Midwestern corn farmers to sequester carbon by changing their agricultural practices, but it would require the partnership of farmers, policymakers, and business leaders.

Energy suppliers under the LCFS generate carbon credits or deficits based upon the carbon emissions of their product. The number of credits or deficits earned depends on how the emissions of the product compares to the current standard. The current LCFS standard for jet fuel and gasoline is close to 90 gCO2e/MJ. However, gasoline has a carbon intensity of 100 gCO2e/MJ. Fuel refiners selling pure gasoline have a deficit of 10 gCO2e/MJ and must buy carbon credits to cover it. For more detail, read this Ag Data News article.

One of the ways fuel refiners can lower the carbon intensity of their product is by blending fossil fuels with a lower carbon intensity biofuel such as ethanol. Corn has historically been the primary source of ethanol in the United States, though other sources such as plant biomass promise to cut into corn’s lead. Most of corn-based ethanol production occurs in the Corn Belt Region of the Midwest. 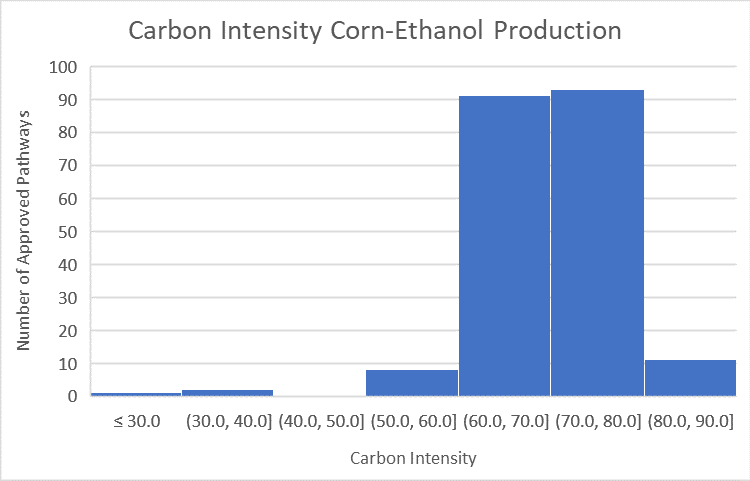 So, how could LCFS influence the farming practices of Midwestern Corn growers? Well, to measure the carbon intensity of any energy product, regulators analyze the entire production and consumption process. The process for biofuels is from farm to fumes.

California regulators currently use a blanket measure of 29 gCO2e/MJ for the carbon emissions directly caused by producing Midwestern corn. Standard farming practices use lots of diesel and fossil-fuel based fertilizers, and heavy plowing also erodes the soil over time, sending carbon into the atmosphere.

However, some farmers are switching to practices like minimum tillage, cover crops, and natural fertilizer application. These practices reduce fossil fuel consumption for diesel and fertilizers, and they can sequester carbon in the soil. Farmers who switch to these practices may sink more carbon in their soil than they emit! Yet, the California Air Resources Board does not currently certify the lower carbon intensity of these farms, and as such, farms with lower carbon intensities are not being rewarded for their efforts.

Some industry leaders are trying to fix this problem, as shown in the video below.

Gevo is not alone in finding ways to reward low-carbon farming practices. Start-ups such as Indigo Ag are working to increase farmers’ access to carbon markets, so they can be paid for sequestering carbon in their soil. Moreover, a bipartisan group of U.S. senators are hoping to authorize the USDA to fund similar programs.

These programs face significant obstacles to success, including additionality – paying farmers for things they would do anyway would not reduce carbon emissions – and permanence – carbon sequestered in the soil this year could be released by plowing next year.

U.S. farmers have a history of being resistant to environmental regulations. I have had many conversations with farmers worried about the costs of future climate-change regulations.

However, it does not have to be this way. If policymakers and entrepreneurs can find more ways to reward low carbon-intensity farmers, then sustainable farming practices can be a boon to farmers instead of a detriment. A strong partnership between policymakers, business leaders, and farmers could be a win for all and for the environment.

[i] The formula used to calculate possible premium per gallon can be found at on pages 70 to 73 in this document. Its form is as follows: Price*Credits, where Credits=Q*(CIS-CIF)*ED*EER*C , Q is gallons of fuel,  CIS is carbon intensity standard, CIF is carbon intensity of the fuel, ED is energy density of the fuel, EER is energy-economy ratio of the fuel, and C is a multiplicative constant. For price, I used current price of $200 a credit. I used a CIF of 40 gCO2/MJ to account for indirect land use change and carbon intensity of ethanol production. From the document, ED = 80.71 MJ/gallon, EER = 1, and C = 10^-6 MT/gCO2. Credits are measured in metric tons.