Which Chicken Sandwich is the Best? 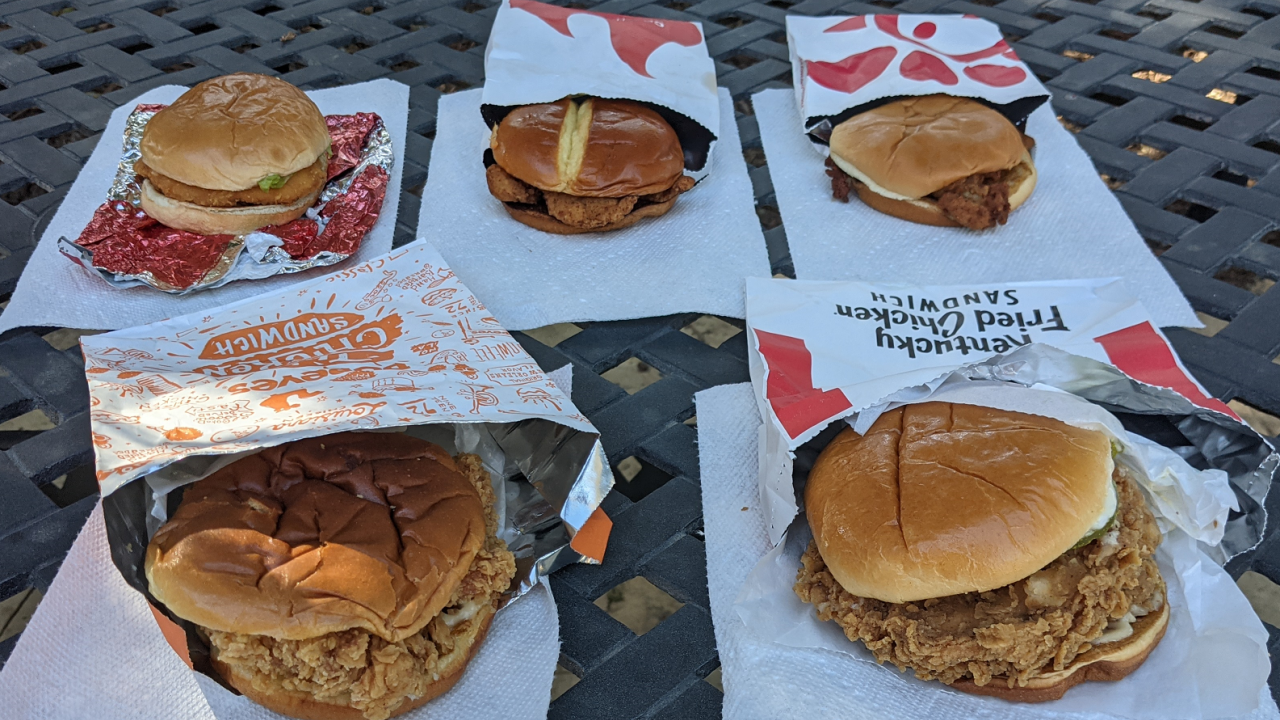 Americans are eating more chicken than ever before, so it comes as no surprise that fast food chains now compete over chicken rather than burgers. Chick-fil-A tripled its sales between 2009 and 2018 becoming the nation's third largest restaurant chain behind McDonald's and Starbucks. Then, in 2019 Popeyes launched a new chicken sandwich that almost immediately sold out, sparking a sharp response from Chick-fil-A. McDonald's and KFC unveiled new chicken sandwiches last month in an attempt to keep up.

Last weekend, my daughter and I embarked on a mission to discover which chain makes the best chicken sandwich. We evaluated Popeyes, Wendy's, Chick-fil-A, McDonald's, and KFC.  We are not the first to run this experiment, but it was fun and we learned things. We did not agree on the best sandwich, but we did agree on the worst.

Chicken consumption in the US has tripled in the last 60 years from 30 pounds per person per year in 1960 to over 90 pounds now. Beef and pork consumption declined over the same period. Americans now eat more chicken than beef and pork combined.

Chicken has always been less expensive than beef and pork on a per pound basis, and the gap has grown recently. Since 2000, beef prices have risen by 45% while chicken prices have declined by 25%. These trends likely play an important role in the rise of chicken.

Modern chickens are much larger than the chickens of yesteryear, which explains the declining price. It is another example of how increasing agricultural productivity has caused food prices to decline in real terms.

The average broiler is almost twice as large at slaughter as its counterpart in 1960, mostly due to genetic selection and improved nutrition. For comparison, cattle increased in size at slaughter by 35% and hogs by 25% over the same period. Contrary to popular belief, hormone supplements are illegal for chickens in the United States, so that does not explain the growth.

So, who makes the best sandwich?  To answer this question as objectively as possible, and inspired by this article, my daughter and I formulated the following research protocol:

We also rated the fries and nuggets/tenders. See the addendum for more on those.

We chose the standard chicken sandwich because we wanted to evaluate the core product. That means no spicy sandwiches (even though we like spicy) and no adding jalapenos or extra sauce or whatever. McDonald's threw off our plans by giving us spicy sandwiches even though we ordered the regular. We decided to roll with it rather than going back to correct the order.

KFC had the biggest sandwich by weight at 10.3oz (291g) followed by Popeyes at 8.6oz (245g). Chick-fil-A had the smallest sandwich at just over half the weight of KFC. There's no apparent correlation between price and weight, and all cost less than $4.50. (Yes, I used my own money.) 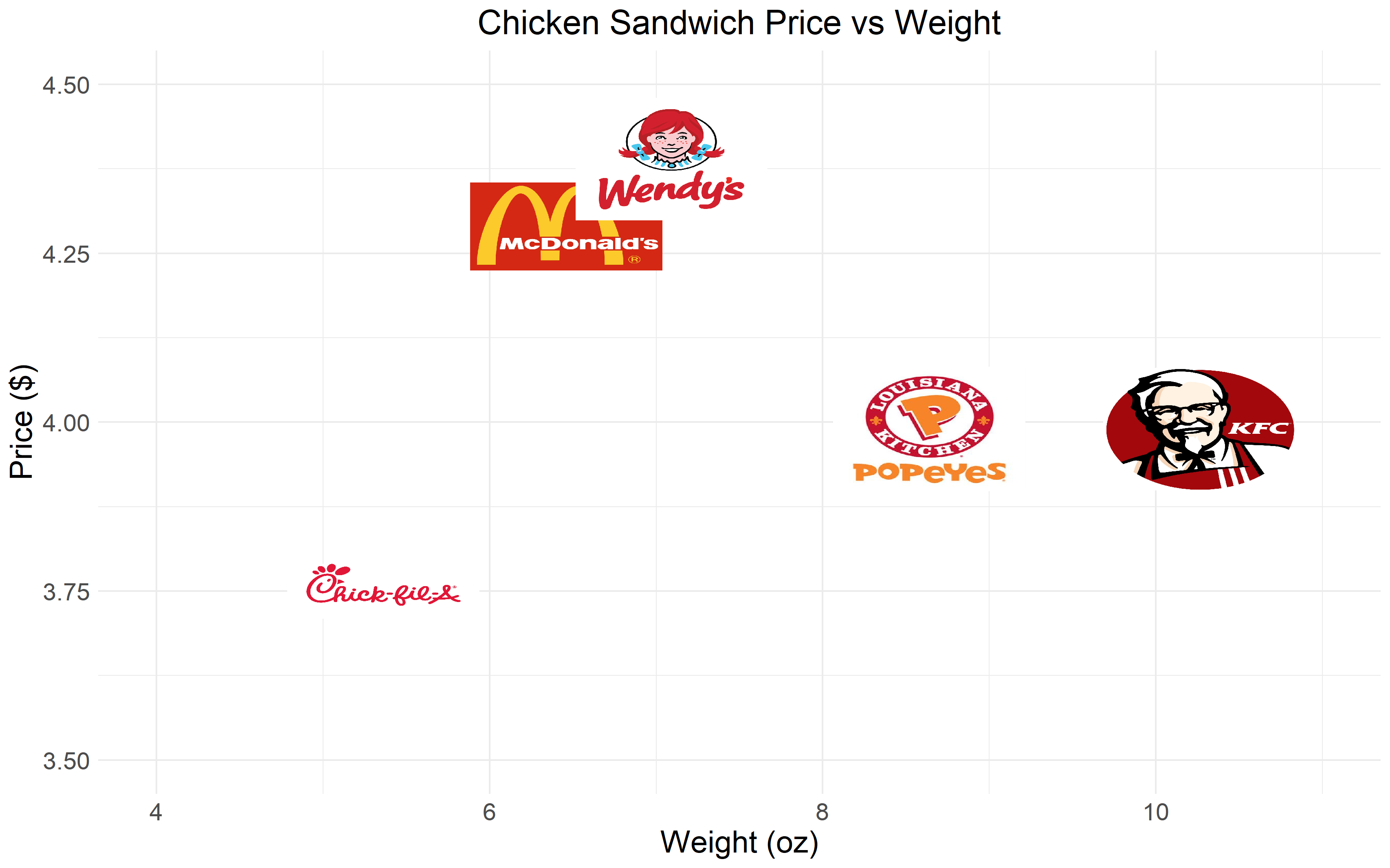 According to their websites, three of the five sandwiches have between 440 and 490 calories. The exceptions are KFC and Popeyes, which report about 200 more calories than the others and were the two heaviest in our experiment.  Most of these extra calories come from fat, which is not surprising given that KFC and Popeyes had notably more batter than the others. Each restaurant reports between 164 and 200 calories from protein, which suggests they target similar amounts of chicken in their sandwiches. 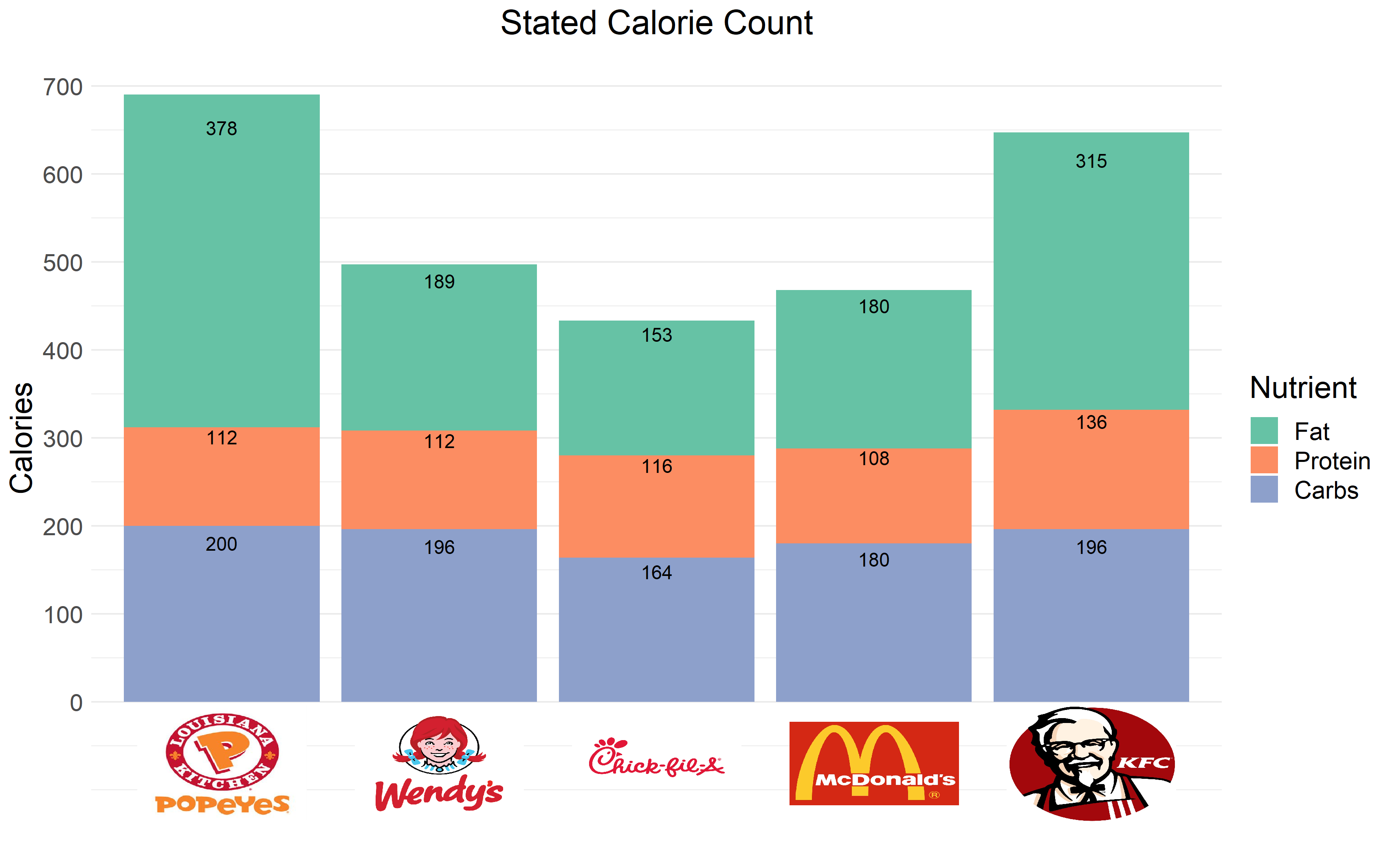 My daughter and I gave quite different ratings. She gave Chick-fil-A an almost perfect score, whereas Chick-fil-A came in fourth for me. I rated KFC as the best, just ahead of Popeyes, i.e., I liked the biggest and fattiest sandwiches. We both agreed that Wendy's made the worst sandwich. 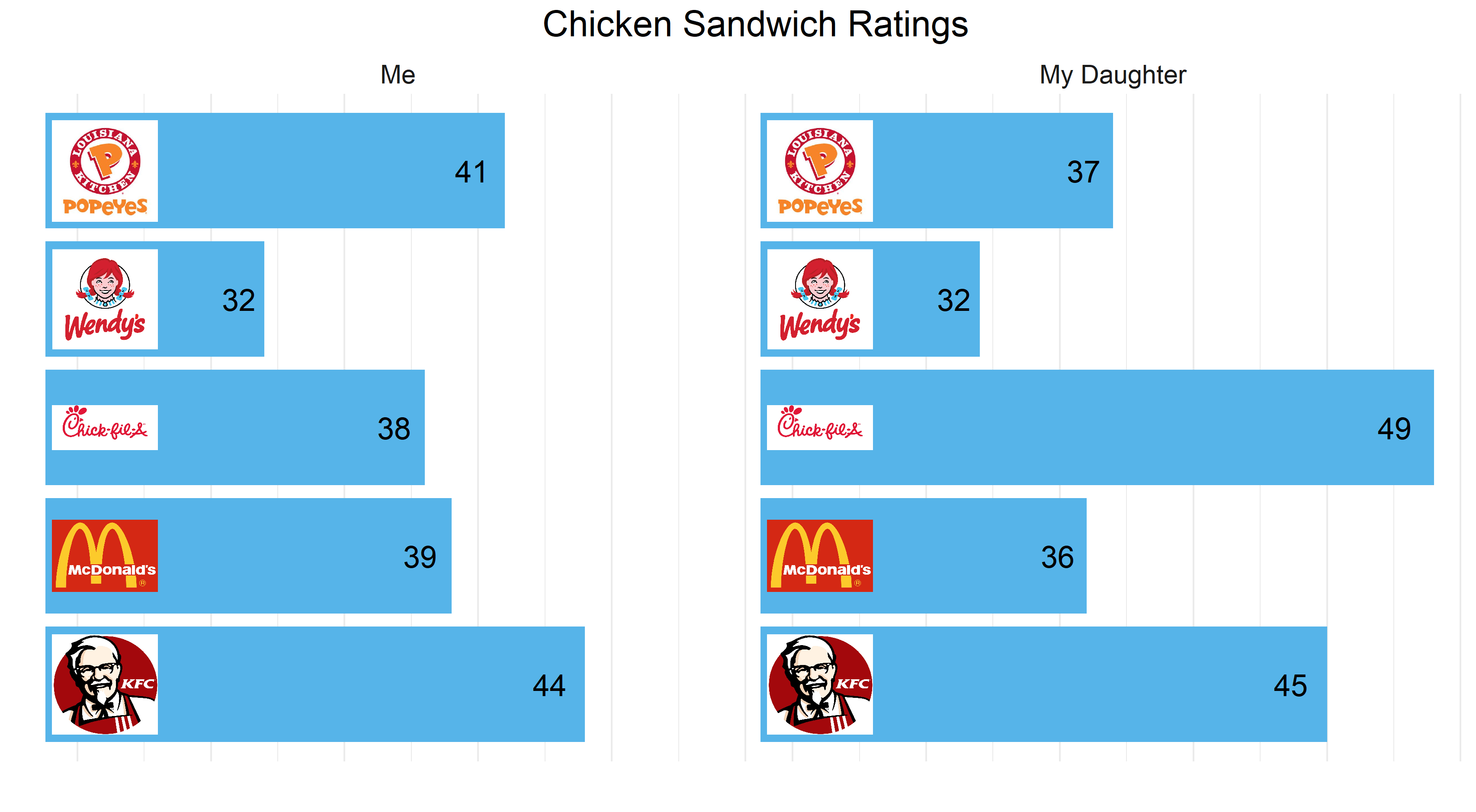 Here are our impressions, in the order that we visited the restaurants.

Popeyes Classic Chicken Sandwich. This one ignited the chicken sandwich wars in 2019. Mouth-watering crunch when you bite into it. The pickle is perfect. The bun has good flavor and holds together well. My daughter didn't like the texture of the chicken, which she found a little rubbery.  I thought there was a little too much batter for the amount of chicken. A little dry the next day.

Wendy's Classic Chicken Sandwich. Our least favorite. Tasted like a generic fast-food sandwich. Too much mayo. This was the only sandwich that came with vegetable toppings, but it would have been better without the anemic lettuce and tomato. It was also the only sandwich to come wrapped in papery foil rather than in a fancy foil-lined bag. Too soggy as a next-day leftover.

Chick-fil-A Chicken Sandwich. My daughter gave this a perfect score in every category, but crispiness. The batter is not crispy. She loves how the bun, chicken, and pickle combine to generate perfect flavor. I was underwhelmed. I thought it tasted good, but lacked the pizzazz of some of the other options. And it is small.

McDonald's Crispy Chicken Sandwich. My initial impression was not good. There was too much sauce, and it was much more spicy than I expected. Once we figured out that we had mistakenly been served the spicy sandwich, which in this case means they add the spicy sauce, we were able to re-calibrate. The chicken was very good, crispy and tasty without too much batter. A solid sandwich.

KFC Chicken Sandwich. Similar crunch and burst of flavor as with Popeyes, but better. The batter tastes better, the chicken had better texture, and there's more chicken, almost too much for the bun. Still flavorful with good texture the next day. My favorite and a solid second for my daughter. 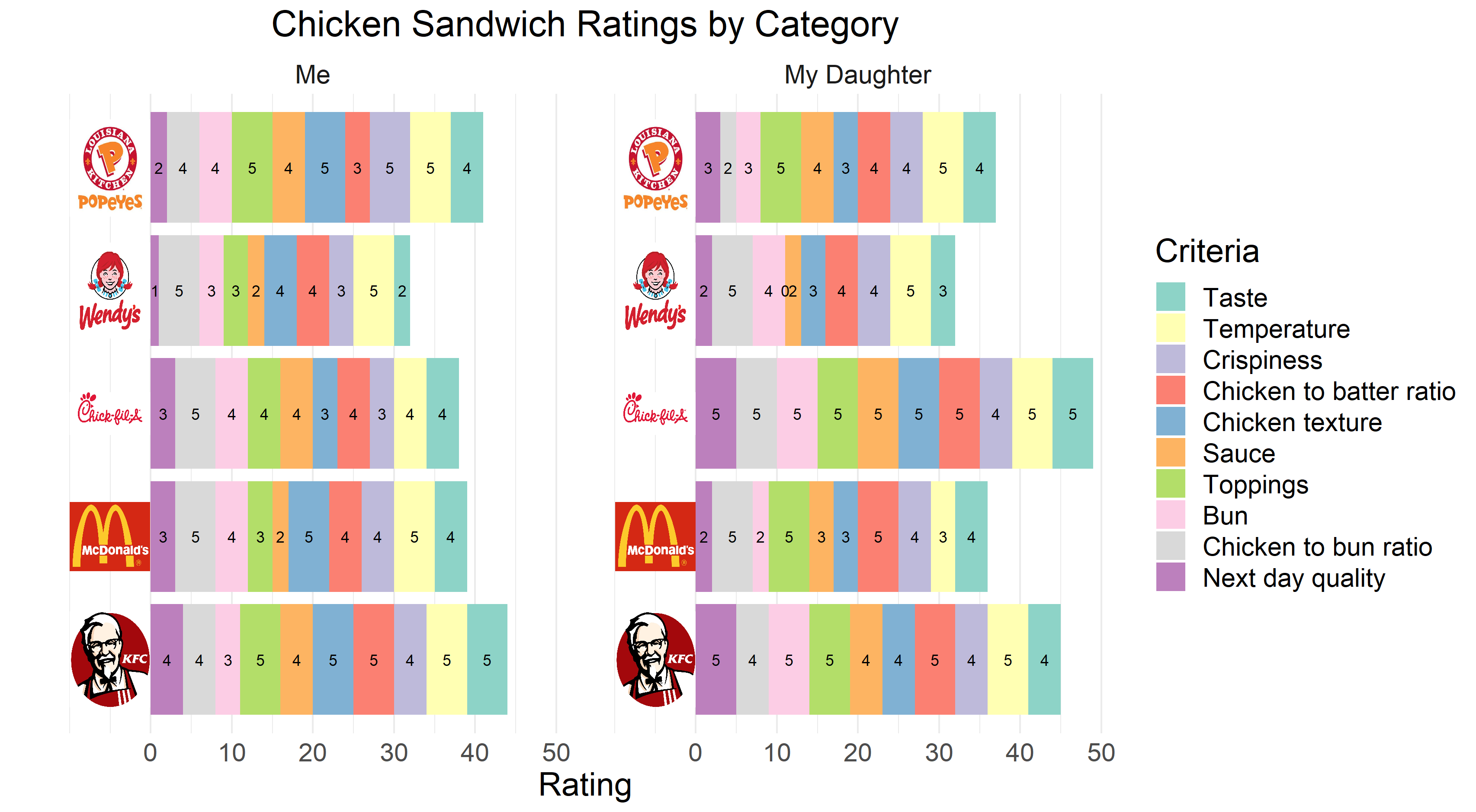 Growing up in New Zealand in the 1980s, KFC was the only international fast food chain we had. I have always loved their food. As a university student, I would often stop at KFC for a zinger burger. (For the Americans in the audience, the zinger burger is a chicken sandwich; in New Zealand we use the word burger to describe a sandwich with cooked meat in a round bun.) Growing up in Northern California in the 2010s, my daughter loves Chick-fil-A. We both expected that she would like Chick-fil-A the best, and I really wanted KFC to be good.

The lesson: our preferences for food and brands are developed over a lifetime, based on objective and subjective qualities of the food as well as our experiences eating that food. Experiences while young can be particularly impactful, which is why we have the term "comfort food".

We bought waffle fries at Chick-fil-A and standard shoestring fries at the other four restaurants. We tasted them immediately and rated them on five criteria. KFC dominated this category. Their fries were crispy and flavorful. We wished we had ordered more.  Popeyes also had excellent fries. Apart from Chick-fil-A, which I didn't like because they were chewy and bland, we agreed on fries. 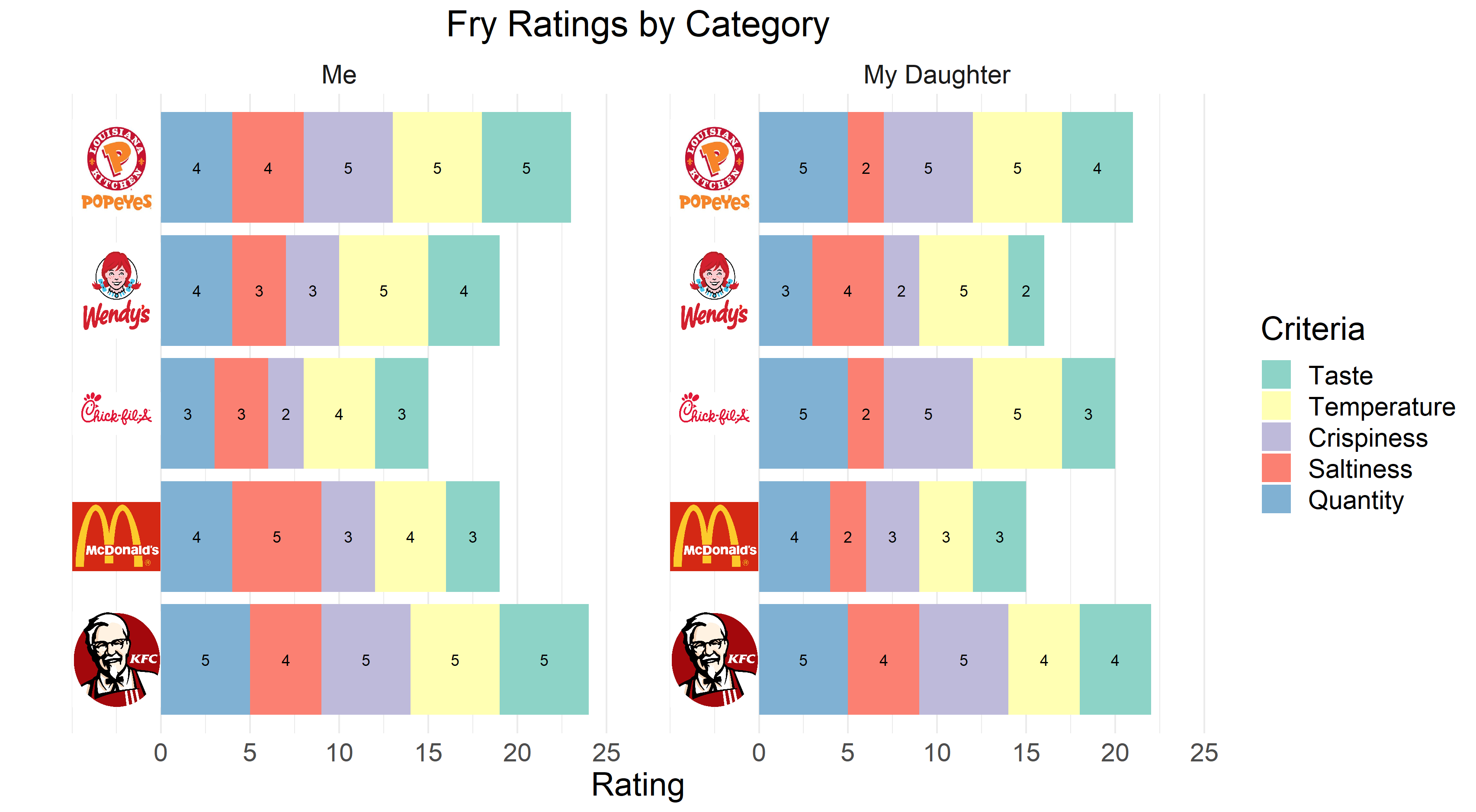 We ordered chicken tenders at KFC and Popeyes (we didn't see nuggets on the menu) and nuggets at the other restaurants. We tasted them immediately and rated them on five criteria. We did not like McDonald's nuggets, as you can tell from my daughter's score of zero in all categories. They did not taste like chicken. Otherwise, I liked the tenders from KFC and Popeyes best and my daughter liked Chick-fil-A. 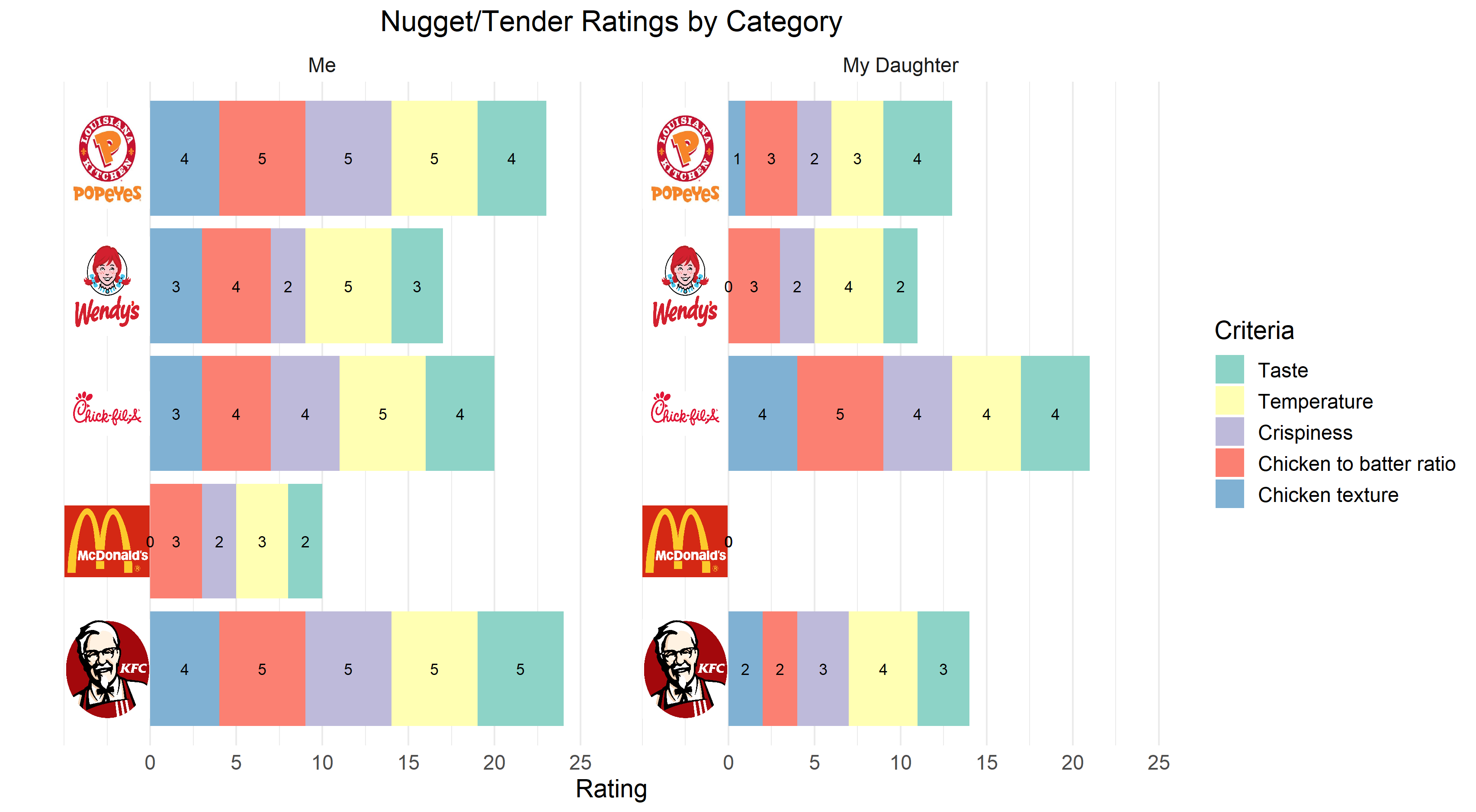