I like to eat beef. I also like air conditioning and driving (though I prefer to ride my bike). These activities all contribute to climate change. To mitigate climate change, it is likely that these products will be produced differently and/or I will do less of these activities in the future.

I am OK that I like those activities and I am OK with the fact that things need to change.

Many people are not OK. Climate activists issue strong moral judgments against activities like eating beef, air conditioning, and driving. Farmers and meat eaters react to defend their honor. The discourse becomes warring moral outrages rather than actual progress.

On Halloween, the New York Times fired the latest salvo in this war of words. In a front page story instigated by Greenpeace, the paper accused UC Davis professor Frank Mitloehner of taking industry money to fund his research. Frank is an animal scientist who works on the effects of animal agriculture on air quality. He is also a fierce advocate for the beef and dairy industries, and is well known for his assertions that these industries are not major contributors to climate change.

The thing is, Frank declares openly that he receives industry funding. The NYT article even says that there is "no indication that Dr. Mitloehner or the Clear Center violated disclosure requirements". Frank responded to the article on his blog.

There are two relevant issues here.  First, is industry funding bad?  Second, is Frank right that the contribution of cattle to climate change has been overstated?

Agricultural research and development (R&D) is vital to a prosperous future, and it is vastly underfunded.  My UC Davis colleague Julian Alston has published numerous pieces showing the massive benefits of agricultural R&D spending, including the book Persistence Pays. This work implies that we should spend billions more on agricultural R&D.  In a recent Breakthrough Institute report, Alex Smith and Dan Blaustein-Rejto make a strong case for increasing funding to "grow enough food for everyone with the least carbon emissions".

Meanwhile, public funding for agricultural R&D in the US has declined by a third in the last 20 years, while private funding has doubled. I don't know how to ascertain which caused which, but the trends are inescapable.

I think it's good that the private sector is investing in agriculture, and I think it's bad that public funding is declining. The presence of industry funding does not imply a research study is biased, but industry funding can shape the questions that researchers ask and how the results are disseminated. It's a complicated topic that I hope to write more about in the future. For an interesting discussion of this topic in the context of the NYT article on Frank, I highly recommend the November 8 episode of the excellent Climavores podcast, hosted by journalists Michael Grunwald and Tamar Haspel. 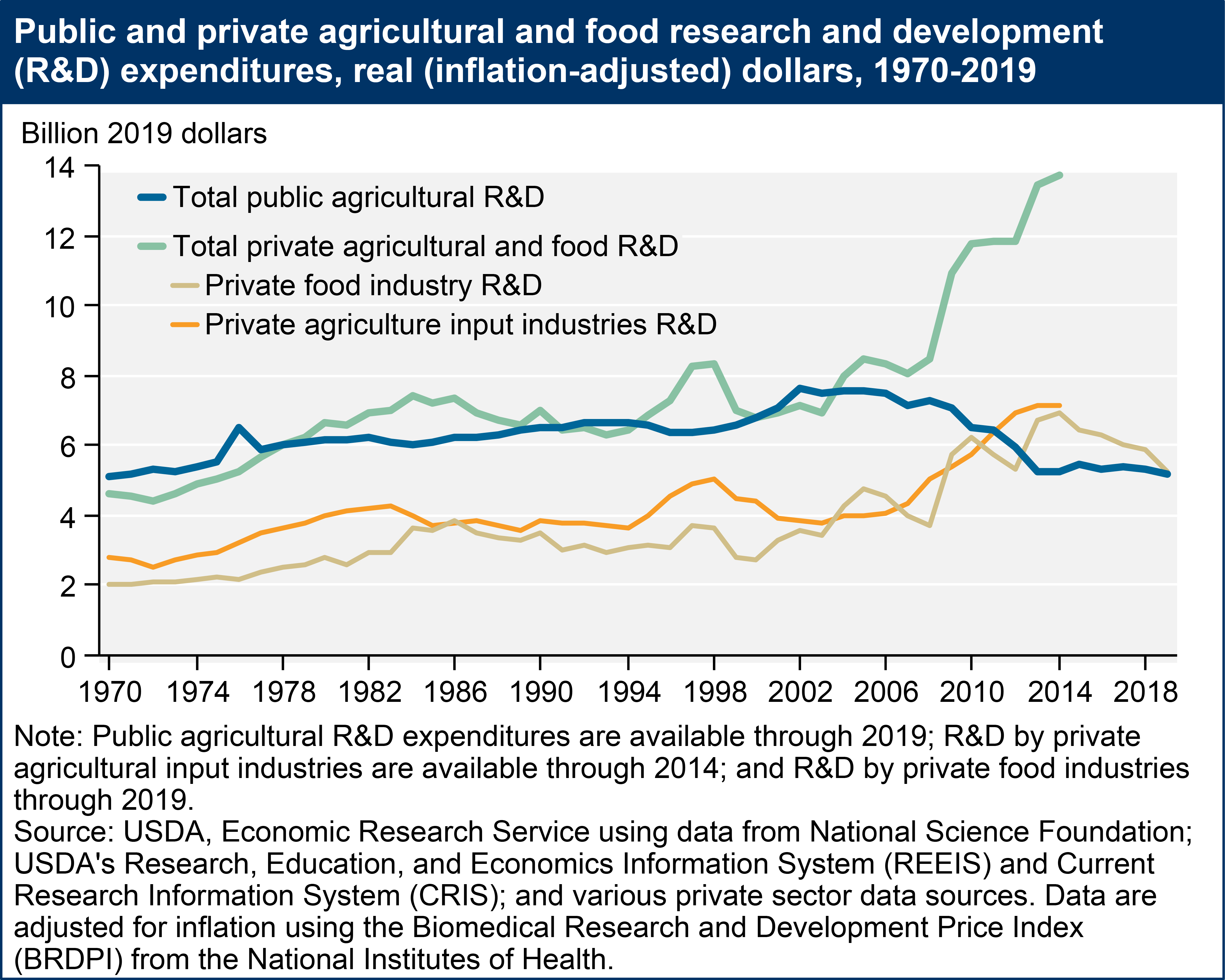 Question: Has the contribution of cattle to climate change has been overstated?

The most prominent source of emissions from cattle is methane from enteric fermentation (burps) and manure. According to this paper by Alan Rotz and co-authors, beef cattle in the United States emit about 500 grams of methane per kilogram of carcass weight. About two-thirds of the carcass is meat, so we have 0.75 pounds of methane per pound of meat. (I switched from kg to pounds because most readers of this blog are in the USA; apologies to my international friends.)

How much do those three-quarters of a pound of methane warm the climate? (For simplicity, I will treat the 0.75lb as though it happens all at once rather than over the approximate three-year life of the animal.)

Methane affects the climate differently than the carbon dioxide (CO2) that is emitted by burning fossil fuels.  It is more potent initially, but most of its effect is gone after 20 years. In a previous Ag Data News article, I explained it this way:

To illustrate the difference and why it matters, imagine logs on a campfire. A ton of methane is like a small log that burns really hot for a short time before the flames go out. Residual embers will keep throwing out a little heat after the flames go out, but most of the heat comes early. CO2 is like a large log that burns steadily all night; it produces a consistent low heat.

To account properly for methane's effects on the climate, we need to account both for how much it warms and when.  That's two things.  It needs two numbers.

The standard approach to accounting for methane is known as the global warming potential (GWP).  It is one number. Using GWP and a time horizon of 100 years, we would say that 0.75lb of methane warms the climate similarly to 28*0.75 = 21lb of CO2.

The graph below illustrates the case of a permanent change in methane emissions.

It can be difficult to conceptualize the two numbers in GWP*.  One way to compare quantities measured at different points in time is to use dollars.

The latest estimate of the cost to society of emitting a ton a CO2 is $185. This is higher than the current US Government number of $50. To use GWP*, we also need an estimate of the social cost of carbon in 2042 and then we need to discount that value back to the present. I'm going to assume that these factors cancel each other out, i.e., the present value of the 2042 social cost of carbon equals $185.

Here are some estimates of the cost to society from various activities:

So, the traditional GWP metric overstates the methane effects of US beef by a factor of three. Yet, 55 cents per pound is still a substantial cost; it is 10% of the current average price of ground beef. 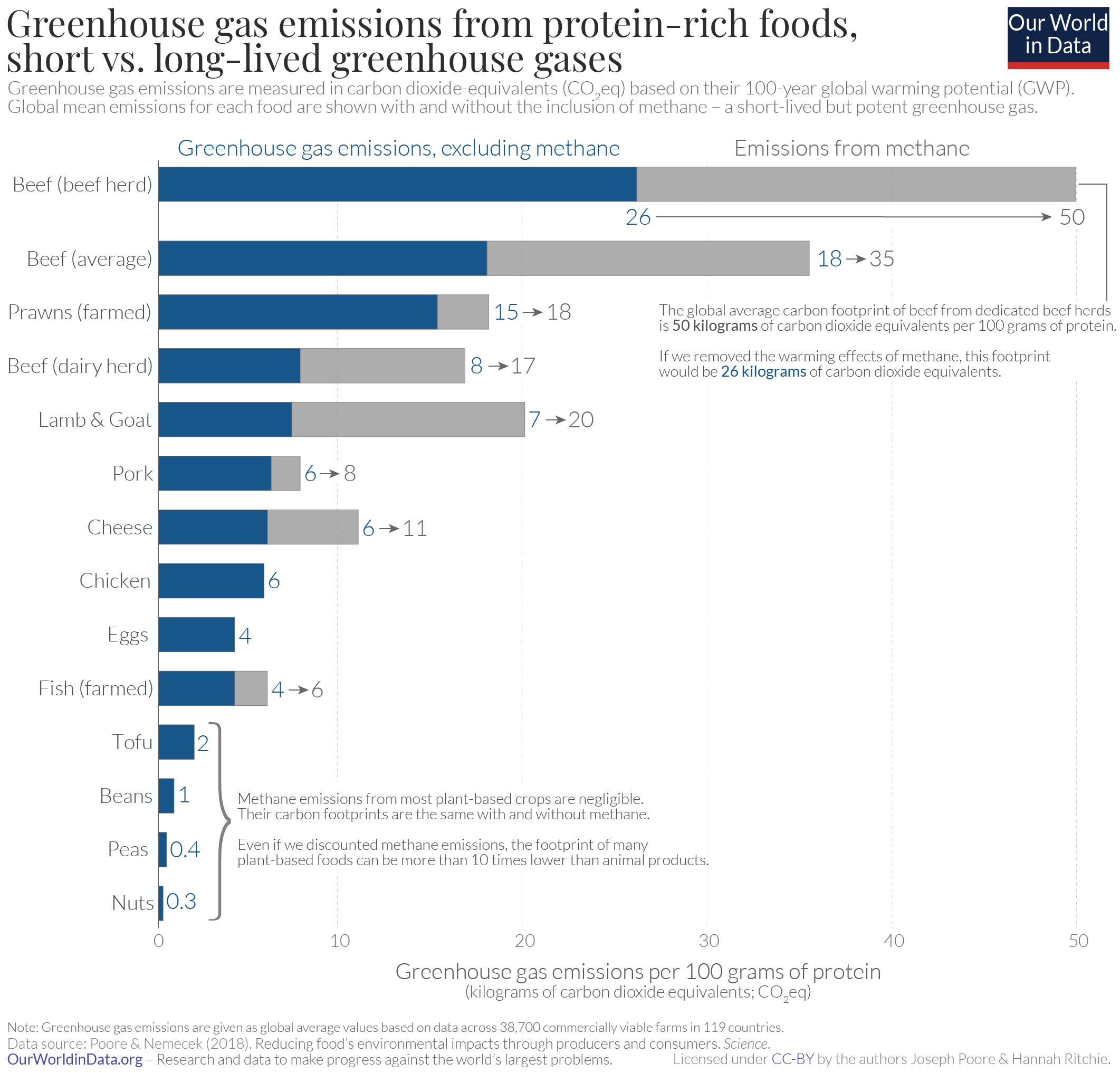 To mitigate climate change, we need research into ways to reduce emissions from beef production (the kind of work Frank does), investment in alternatives to beef that people will want to eat, and prices that signal to consumers the relative climate costs of various foods.

None of this means you are a bad person for eating beef.  We all generate carbon emissions in all parts of our life. Don't take it personally. Instead, embrace the potential changes that lie ahead. Maybe there's something out there that will become your new favorite food.