Lightning strikes during a heat wave in a bone dry state make for a lot of devastation. This is what happened in California in August 2020, taking lives and livelihoods, causing billions of dollars of damage, and filling the air with toxic smoke.

In this article, I estimate that wildfires reduced the value of the wine grape crop by about 30% in Monterey, Napa and Sonoma counties. At the time of the fires, I argued that smoke taint unlikely have large effects on California wine because most grapes were not close to fires. This take may be correct in aggregate, but it has become clear that wine grapes in some areas suffered significant wildfire damage, whether due to smoke-damage or burned vineyards. 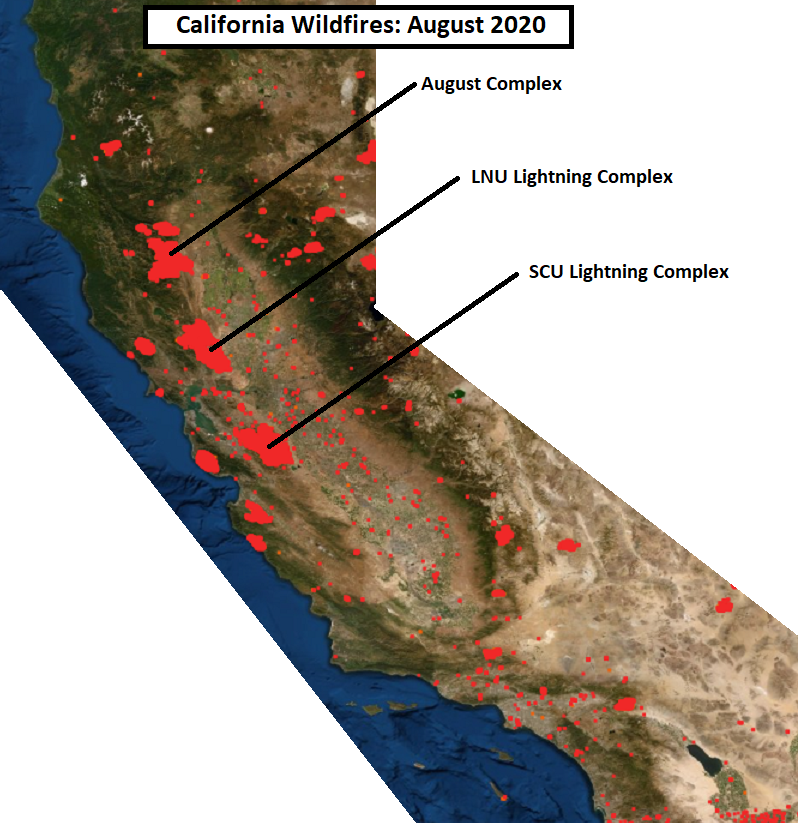 One way to see the damage is to look at crop insurance records, which you can easily view on our US Crop Insurance data app.

First, some background. Crop insurance liability on grapes increased substantially in 1995 and again in 2014. In recent years, the Federal crop insurance program has carried liability of just over $1.5b on grapes annually.

Most insured grape acres are in California, although there are some in Washington and a few elsewhere. After all, every state in the union has a wine industry. The crop insurance program covers grapes grown for wine, juice, raisins, or canning, so it includes more than just wine grapes. Table grapes are covered under a separate program.

Crop insurance is designed to be actuarially fair, meaning that over time the average premium equals the average indemnity. In 2020, the program paid out indemnities almost 5 times the amount of premium received. Before 2020, the highest loss ratios were 1.20 in 1994 and 1.14 in 2015. Many farmers could have held insurance for many years before 2020 and never once made a claim.

Most of the insurance premiums on grapes are paid by the Federal government. In 2020, growers paid 35% of the premium cost and the government paid the other 65%. This graph shows why crop insurance coverage increased dramatically beginning in 1995 - it was because of a large subsidy increase.

In the late 1990s, most crop insurance coverage for grapes fell under the catastrophic risk protection (CAT) program. CAT covers production below 50% of the average production history (APH) for a grower, and it compensates those shortfalls at 55% of the established price. Although CAT provides only partial insurance, it was initially appealing to growers because the government pays the entire premium. Growers pay only a fixed administrative fee, currently $655 per crop per county.

Most of the grape crop insurance indemnities paid out in California in 2020 went to three counties:  Monterey, Napa, and Sonoma.  Growers in Napa and Sonoma each received $75m in indemnities and Monterey growers received $35m.

Almost all the indemnities paid out in the three hardest hit counties were due to fire damage: $32m in Monterey, $71m in Napa, and $63m in Sonoma.

And almost all the indemnities were paid out for damage that occurred in August, which is when the major fires occurred. The fires in 2017 and 2019 occurred in the fall after most grapes were harvested, which reduced their impact on the crop.

Growers in the three hardest-hit counties have mirrored the aggregate data by migrating away from CAT coverage towards buyup coverage to obtain higher coverage levels. In 2020, insured acreage was:

The above plot shows low insured acreage for 2021. However, growers do not have to report insured acreage until May 15, so this number will likely increase.  In fact, the number of policies sold for 2021 is about 5% higher than in 2020, so insured acres are likely to also be higher in 2021.

The 2020 crush in Napa was 61,000 tons less in 2020 than in 2019, which was a normal yield year.  At the pandemic-depressed price of $4600/ton, this implies losses in Napa county of $281m, which is about 4 times the insurance payout.  However, only 60% of Napa acres were insured, so it's likely that growers with insurance recovered much more than a quarter of their wildfire losses. For Monterey, insurance indemnities for fire damage were over half the estimated losses and for Sonoma they were a third of losses. Further details on these calculations at the end of the article.

There are plenty of reasons why these numbers may over- or under-estimate losses due to wildfire damage. Some of the losses were likely due to early-season heat rather than wildfire (over-estimate). The damage may also have depressed the price below what it otherwise would have been (under-estimate).  2019 may not be an appropriate estimate for what production would have been without wildfires, etc.

However, we do know that wildfire losses significantly exceeded insurance indemnities because crop insurance is not designed to restore revenues to their normal level. Depending on the product, indemnities don't kick in until the production drops below 50-85% of average, with most policies at the lower end of that range.  Growers who lost 25% of their crop but had insurance at 70% coverage would receive no payout.

This all suggests that the estimates in the above table, a total of $535m or about 30% of the typical value of production, are a reasonable approximation to the 2020 wildfire losses to wine grape growers in Monterey, Napa and Sonoma.

Scientists at UC Davis and other institutions are studying how smoke affects wine quality. This work may lead to methods to mitigate smoke losses in the vineyard or during the winemaking process, which may reduce the effects of the inevitable future wildfires.

Yesterday, I participated in an ARE Discussions webinar on on Wine and Wildfire. Questions raised there prompted me to look into crop insurance for this article.

Most of the figures in this article come directly from our US Crop Insurance Data App.  Check it out!  I generated the county level figures using this R code.

What would production have been without the wildfires? Demand reductions cause prices to drop. In most markets, producers respond to lower prices by supplying less. However, the pandemic arrived too late in the season for growers to reduce 2020 reduction in response. Let's take 2019 as a benchmark year and assume that 2020 production would have been the same as 2019 if wildfires had not occurred. Thus, I attribute the entire 2019-20 drop in production to wildfire damage.  To the extent that early-season heat mattered, it would reduce the losses attributable to wildfire.

With these assumptions, we can estimate the loss as the 2020 price multiplied by the drop in production from 2019 to 2020.

A California Avocado Hass Taken Over the World

Should I Feel Guilty for Eating Beef?

Making Hay While the Water Flows